Biden Is Sinking Deeper Into The Dementia Zone 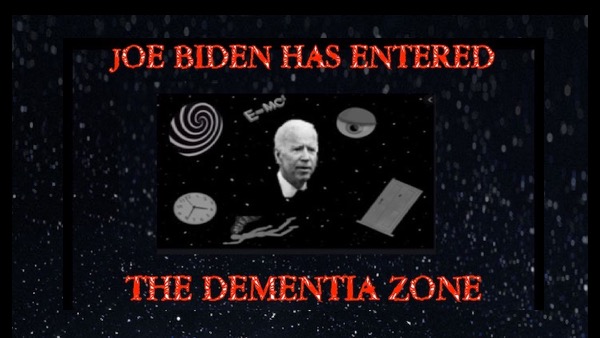 There is a middle ground between light and shadow, between science and superstition, and it lies between the pit of man’s fears and the loss of their mental abilities. This is the dimension where a person desperately tries to hold on to a lifetime of memories, it is an area engulfing a presidential candidate. Joe Biden is in the Dementia Zone.

While appearing in a virtual event on Sunday night with George Lopez and CNN analyst Ana Navarro, Democrat White House hopeful, Joe Biden seemed to have a brain freeze and confused Donald Trump with George Bush.

Bush was the last “George” to run for reelection.

Jill Biden was expressionless during his statement.

During the “I Will Vote Concert” event, Navarro, a “Republican” CNN personality, fawned over the Bidens and showed off her dog’s Biden swag.

It wasn’t his only gaffe of the day.  According to a Gateway Pundit report, Biden let loose with a whopper that required a correction from his handlers.

“I can send every qualified person to a 4-year college in their state for $150 billion,” he said during an interview with 60 Minutes host Norah O’Donnell. “I can make sure every single person who qualifies for community college can go, and we’d still have a lot of money left over.”

But — surprise, surprise — he lied, as always, and his staff had to correct the record.

“After our interview, Mr. Biden’s staff told us he misspoke and that the cost of free public college could be twice as much as he said,” O’Donnell said.

And that wasn’t the only time O’Donnell had to correct his statements.

CBS News' Norah O'Donnell fact checks Joe Biden's claims on the trade deficit with China: "lower in 2019 than it was during the last three years of the Obama administration" #60Minutes https://t.co/m3ZoHv7Roz pic.twitter.com/QKLlqg4E4j

This happened just one day after he admitted having put together a voter fraud operation unseen in American politics.

On Sunday, Bloomberg reporter Tyler Pager said Biden put a “lid” on his campaign (Note: he wasn’t talking about this Lid):

Joe Biden’s campaign has called at lid at 11:27 am, just nine days before the election. In the last week, he has only held three campaign events outside of participating in the debate. He was in Durham, North Carolina last Sunday and made two stops in Pennslyvania yesterday.

As Biden continues to sink into the Dementia Zone,  President Trump continues to hold rallies across the nation.

“This guy has more lids, I don’t know, there’s something going on; somebody said it’s a strategy, it’s not, because really strategy would be coming out,” the president said in New Hampshire.