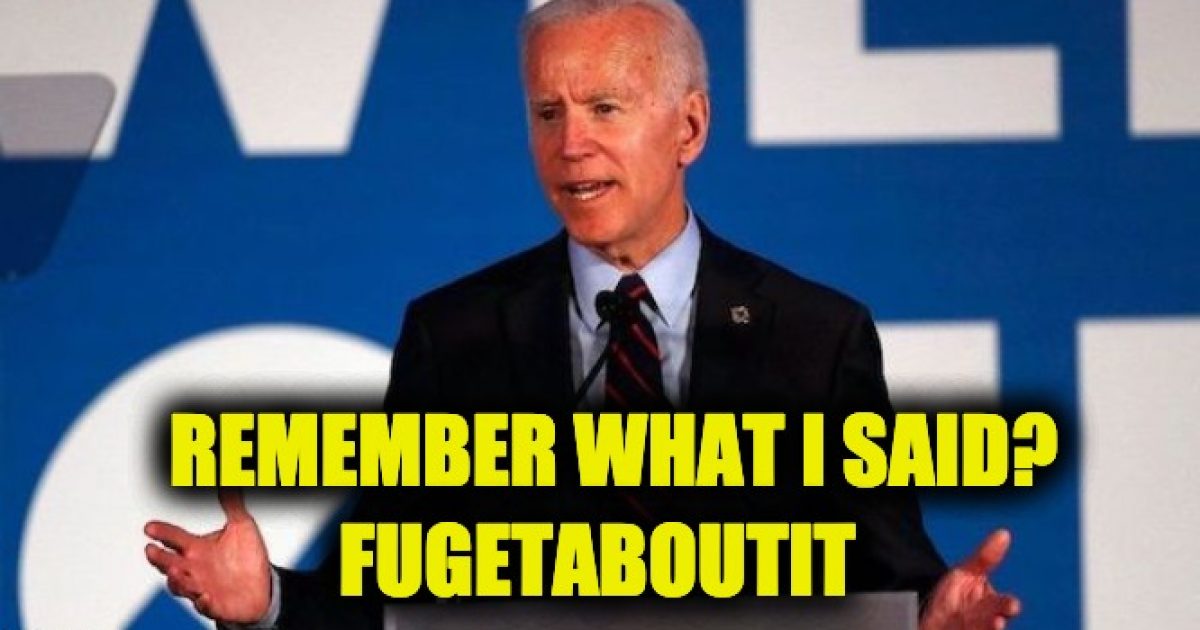 He’s still the Schmo of the United States (SCHMOTUS) In his second major policy flip-flop in a week Joe Biden now says, “We need to get tough with China. China poses a serious challenge to us, and in some areas a real threat.” Which wouldn’t be wrong if it didn’t reverse a policy he’s had for two decades, and he didn’t say the complete opposite thing a month ago.

On May 1st (a favorite day for socialists) at a campaign stop in Iowa City Biden said,

The SCHMOTUS doubled-down on his stance two weeks later in New Hampshire:

Biden was roundly criticized for his statements,  For example,  Fellow Democratic presidential hopeful Rep. Tim Ryan of Ohio told CNN that Joe Biden’s China statement as “stunningly out of touch.”

“I actually think that’s stunning,” Ryan said. “And I love Joe Biden. But I think that’s stunningly out of touch with where we are right now.” Ryan cited China’s initiatives such as building militarized islands in the South China Sea and dominating the electric car and solar power industries.

“They’re putting billions of dollars behind these projects, and they have a 100-year plan,” he added. “We’re in a 24-hour news cycle. And they’re winning, and that’s the urgency that I’m bringing to this race.”

Well, Ryan and the other critics of Biden’s China stance no longer have to worry. Because on Tuesday Biden was in Iowa again and did a 180-degree turn on China.

“We are in a competition with China. We need to get tough with China. They are a serious challenge to us and in some areas a real threat.”

Now that he had the same position on China as Trump, he criticized the President’s strategy.

And every single step that Donald Trump is taking is only exacerbating the challenge. While Trump is tweeting, China is making massive investments in technologies of the future. While Trump is name-calling, China is building roads, bridges, and high-speed rail. While Trump is pursuing a damaging and erratic trade war, without any real strategy, China is positioning itself to lead the world in renewable energy. While Trump is attacking our friends, China is pressing its advantage all over the world. So you bet I’m worried about China — if we keep following Trump’s path.

What Biden didn’t address is the fact that he has always been a big supporter of increasing trade with China and in 2012 he said that China was fixing the very same issues President Trump is trying to address with China today.

Biden has always supported expanded trade with China. In 2000, he voted to approve Permanent Normal Trade Relations with China. In a presidential debate in 2007, when asked, “Would you call for tariffs to protect American consumers from unsafe products from China? Are you willing to go there?” Biden answered, “I’m not. No, I’m not willing to go there. You don’t need to start a tariff war. All you have to do is enforce the law. Enforce the law.”

So which position is really Bidens? Perhaps what he really believes is that the Chinese government shouldn’t fund abortions, also known as the Xi Amendment.

The truth is Biden doesn’t really know about foreign policy. As former secretary of defense under Obama wrote in his biography Biden’s “been wrong on nearly every major foreign policy and national security issue over the past four decades.”