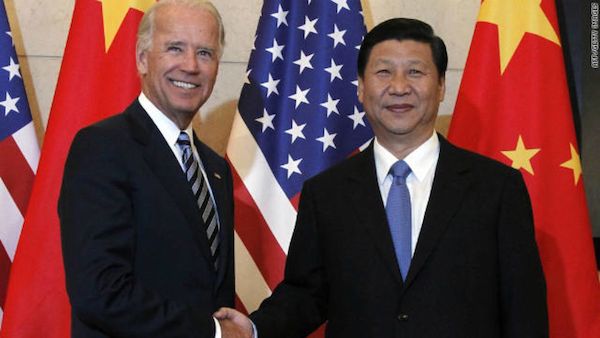 Per a recent Gallup Poll, Americans have never had a lower opinion of China than it does today. Only 33% of Americans have a favorable view of the Communist country. One of those 33 % with favorable disposed to China is running for President. Throughout most of his political career, Joe Biden was a supporter of China. Despite decades of Chinese tariffs, stealing American intellectual property, territorial water disputes, propping up North Korea, atrocities against its own people, etc., Joe Biden was a supporter of the CCP.

On May 1st, 2019, Biden mocked President Trump for believing China was a threat.

Biden was roundly criticized for his statements,  For example,  Fellow Democratic presidential hopeful Rep. Tim Ryan of Ohio told CNN that Joe Biden’s China statement as “stunningly out of touch.”

“I actually think that’s stunning,” Ryan said. “And I love Joe Biden. But I think that’s stunningly out of touch with where we are right now.” Ryan cited China’s initiatives such as building militarized islands in the South China Sea and dominating the electric car and solar power industries.

“They’re putting billions of dollars behind these projects, and they have a 100-year plan,” he added. “We’re in a 24-hour news cycle. And they’re winning, and that’s the urgency that I’m bringing to this race.”

In June 2019, a month after he mocked Trump’s China stance, Biden flip-flopped. He said, “We need to get tough with China. China poses a serious challenge to us, and in some areas, a real threat.”

That wouldn’t be a suspect statement if it wasn’t a reversal of a policy he’s had for two decades, made when it looked as though his campaign was faltering, and it looked as if he wouldn’t get the nomination.  His reversal was probably made to relieve the political pressure.

Jim Geraghty of NRO provides some other examples of Biden’s China love:

In 2000, he [Biden] voted to approve Permanent Normal Trade Relations with China. In a presidential debate in 2007, when asked, “Would you call for tariffs to protect American consumers from unsafe products from China? Are you willing to go there?” Biden answered, “I’m not. No, I’m not willing to go there. You don’t need to start a tariff war. All you have to do is enforce the law. Enforce the law.”

Not willing to go there?  In 2020 President Trump “went there” and China folded.

Actually, the CCP did nothing, the made agreements about intellectual property in the Phase 1 agreement negotiated with Trump. THIS President will not allow the communists to get away with breaking the agreement. But first, he will find a way to punish them for the China virus.

Maybe Biden’s favorable opinion of China comes from his memories of negotiating with Chinese leaders.  This past February, he claimed that as VP, he worked on the Paris Climate Accord with former Chinese leader Deng Xiaoping. That negotiation has to be considered a significant accomplishment considering that Deng Xiaoping died 23 years before the agreement was signed. Negotiating with the dead is a unique skill.

Biden’s son Hunter has a special relationship with the Communist nation. As revealed in Peter Schweizer’s book Secret Empires: How the American Political Class Hides Corruption and Enriches Family and Friends:

In December 2013, Hunter traveled to Beijing aboard Air Force Two with his dad, VP Joe Biden. Coincidently (if you believe in coincidences) ten days later, “Hunter’s company, Rosemont Seneca, became a partner in a new investment company backed by the state-owned Bank of China.” They called the new company,  Bohai Harvest RST (BHR).

In a NY Post article summarizing the Hunter Biden/China part of his book, Peter Schweizer wrote:

Via a statement by his attorney on October 13th of 2019, Hunter Biden announced his intention to resign from the board of directors of BHR, the Chinese investment company he helped to create by October 31st, 2019. As of 2020 Tax Day,  six months after he promised to resign, Hunter was is still on the board

Joe Biden has criticized President Trump for every step he’s taken in fighting the CoronaVirus. That includes calling the POUTS Xenophobic for the China travel ban, which many, including, Dr. Fauci credits saving American lives.

So if he had the power, which way would Biden go with China? Probably the wrong way. As Robert Gates, former secretary of defense under Obama wrote in his biography— Biden’s “been wrong on nearly every major foreign policy and national security issue over the past four decades.” And his love affair with China is a big part of it.  Just take a look at the video below: