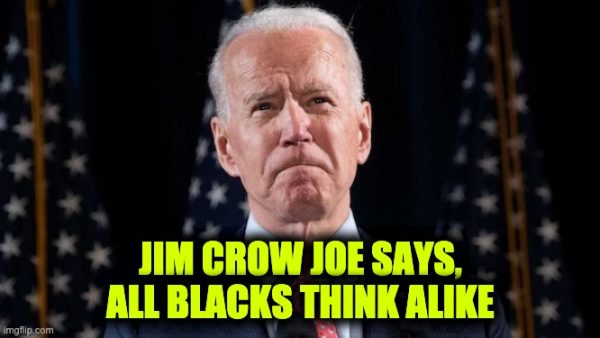 If he weren’t a Democrat, this would be the end of his campaign.  On Thursday morning Biden unloaded his latest racist faux pas. He said he believes that African-Americans all think the same. Joe Biden Blacks think alike

During Thursday’s interview, Biden said, “What you all know, but most people don’t know, unlike the African American community, with notable exceptions, the Latino community is an incredibly diverse  community with incredibly different attitudes about different things.”

.@JoeBiden: “Unlike the African-American community, with notable exceptions, the Latino community is an incredibly diverse community" pic.twitter.com/CFO4Q40jEI

One of the things that is utterly shocking is that Joe Biden has made racist statements and supported racist people his entire career, and he’s still considered an icon on the left largely. That’s because he was the Vice President of the first Black President.  But then again, he described that first Black POTUS as “the first mainstream African-American who is articulate and bright and clean.” And Jim Crow Joe praised e praised the “civility” of an arch-segregationist late Mississippi Sen. James O. Eastland.

Eastland wasn’t the only segregationist Biden supported, for example:

Maybe Biden thinks that Democrats “own” the votes of African Americans because they don’t really have much diversity of thought. After all, he did say, “if you have a problem figuring out whether you’re for me or Trump, then you ain’t black,”

At a campaign event last summer in Iowa, Biden told supporters, “poor kids are just as bright and talented as white kids.” He quickly corrected himself after some applause by adding: “Wealthy kids, black kids, Asian kids. Isn’t it racist to believe that all poor kids aren’t white?

Racial jungle? If a Republican said that ANTIFA would show up at his house. There are so many more examples of Joe Biden disparaging, or passing laws to hurt African Americans or other minorities. Jim Crow Joe Biden encapsulates everything that the left claims that President Trump is but isn’t––bigoted, authoritarian, sexist, angry, too free with his words. That’s on top of the fact that he’s clearly losing it.

Despite that he’s running on most of Bernie’s socialist platform, Biden is one of those “old school” Democrats after all. The Democratic Party’s history is one that opposed the abolition of slavery, imposed Jim Crow laws, fought against the Civil Rights movement, started the Ku Klux Klan, and continues to keep African Americans as a dependant sub-class of Americans to this day with their terrible policies that have devasted the black community and all but destroyed the black nuclear family. Despite all of this, Democrats count on African Americans voting for them in droves because they’ve successfully labeled Republicans as the problem.

Some of this post was first seen at Clash Daily.