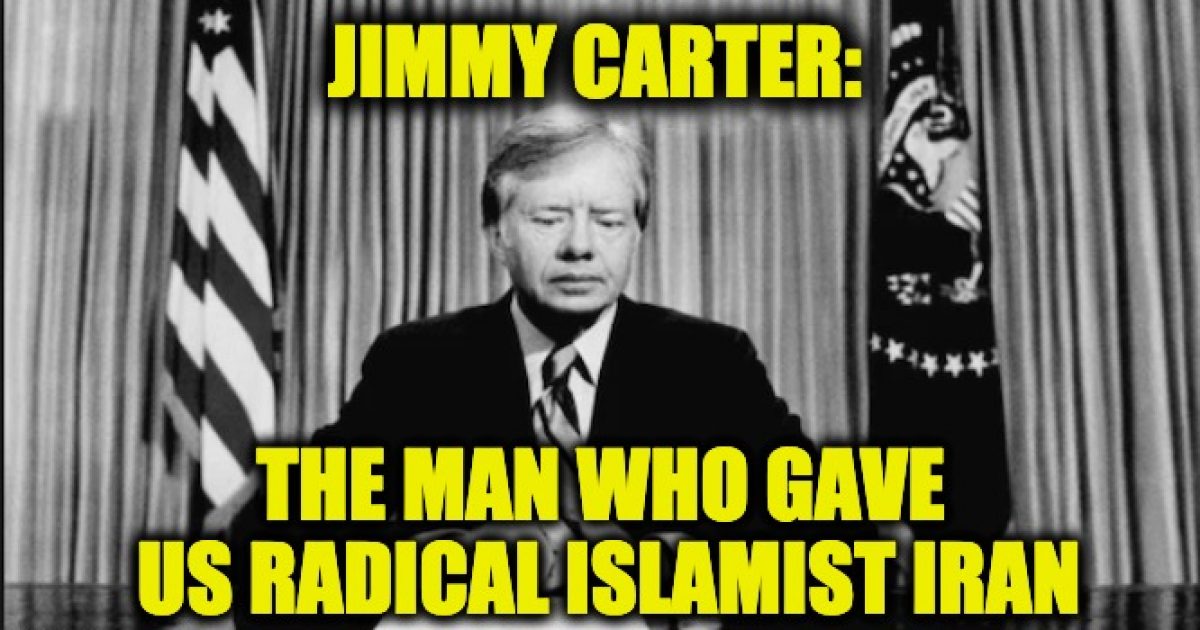 As a country, two things we have learned from Barack Obama is if things are going lousy blame the previous administration and if your successor fixes your mistakes, take credit for it. There are times, however, when predecessors have earned the responsibility for the bad things going on in the world. A great example is the rogue regime of crazies that are running Iran.

The “achievement” of Jimmy Carter’s that will endure for a long time will be the fact that there’s a bunch of Islamist crazies running Iran who want to control the entire Middle East, blow up Israel and the United States. God forbid! If the Iranian crazies who run the country ever get their hands on “the bomb” the resulting countless deaths will also be part of why we remember Jimmy Carter (and Barack Obama)

A few years ago there was an interesting analysis in the JPost about Carter and Iran that said in part:

Carter viewed Khomeini as more of a religious holy man in a grassroots revolution than a founding father of modern terrorism. Carter’s ambassador to the UN, Andrew Young, said “Khomeini will eventually be hailed as a saint.” Carter’s Iranian ambassador, William Sullivan, said, “Khomeini is a Gandhi-like figure.” Carter adviser James Bill proclaimed in a Newsweek interview on February 12, 1979 that Khomeini was not a mad mujahid, but a man of “impeccable integrity and honesty.”

In other word’s, Jimmy Carter and his foreign policy team had their collective heads up their arses.

The Shah, on the other hand, had the Peanut President down pat. He told his personal confidant, “Who knows what sort of calamity he [Carter] may unleash on the world?”

Michel D. Evens, an expert on Middle East affairs says Carter considered Khomeini a ‘holy man’ and believed every crisis could be resolved with diplomacy. It was Carter’s Kumbaya-pacifism that got him into trouble

Carter never got it that Khomeini, a cleric exiled to Najaf in Iraq from 1965-1978, was preparing Iran for revolution. Proclaiming “the West killed God and wants us to bury him,” Khomeini’s weapon of choice was not the sword but the media’s.  Using tape cassettes smuggled by Iranian pilgrims returning from the holy city of Najaf, Khomeini, fueled disdain for what he called gharbzadegi (“the plague of Western culture”).

But that didn’t slow down Jimmy Carter, who felt that deep down, everyone wanted to be peaceful and friends of America, despite that the Ayatollah Lunatic Khomeini was already calling the U.S. the “Great Satan,” and taught that democracy was the equivalent of prostitution.

Carter pressured the Shah to make what he termed human rights concessions by releasing political prisoners and relaxing press censorship. Khomeini could never have succeeded without Carter. The Islamic Revolution would have been stillborn.

Gen. Robert Huyser, Carter’s military liaison to Iran, once told me in tears: “The president could have publicly condemned Khomeini and even kidnapped him and then bartered for an exchange with the [American Embassy] hostages, but the president was indignant. ‘One cannot do that to a holy man,’ he said.”

But anyone who would allow students under his rule to take 60+ diplomats hostage for 444 days is not what I would consider a “holy man.” But unlike most liberals, Carter believed that most leaders had good in their hearts, even when they didn’t.

Mike Evens author of “In The Final Move Beyond Iraq” wrote in the Jerusalem Post:

I sat in the home of Gen. Huyser, who told me the shah feared he would lose the country if he implemented Carter’s polices. Carter had no desire to see the shah remain in power. He really believed that a cleric – whose Islamist fanaticism he did not understand in the least – would be better for human rights and Iran. He could have changed history by condemning Khomeini and getting the support of our allies to keep him out of Iran

Carter’s belief that every crisis can be resolved with diplomacy – and everything not solved by diplomacy is a wrong solution. 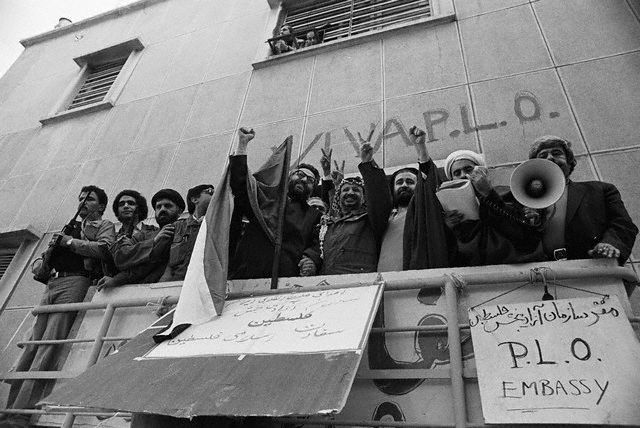 The Former Israeli Embassy Taken Over By The PLO

Some governments are totally evil and must be openly confronted and defeated. Khomeini had the help of the PLO when he came back to Iran that alone should have been a big hint about Khomeini. But then again, Carter believed the Palestinian terrorist to be “good guys.” The PLO supplied weapons and terrorists to murder Iranians and incite mobs in the streets. No wonder Yasser Arafat was hailed as a friend of Khomeini after he seized control of Iran and was given the Israeli Embassy in Teheran, where PLO flag still flies overhead.

Forty years after Jimmy Carter installed Ayatollah Khomeini and his team of radical Islamists into power, the government he helped to create threatens the lives and liberties of the American people, fires upon American troops based in Iraq, and is still seeking nuclear weapons which the JCPOA allows them to do in 6-11 years.

But none of this had to happen, the hostages, the years of Iranian threats, hanging homosexuals for sport, throwing Christians in prisons, and other horrible torture of people who do not follow the Iranian political rules, and its radical Islamist Shariah law.

The Shah of Iran was not a boy scout, but thanks to Jimmy Carter, he was replaced by a terrorist supporting radical Islamist state, whose slogan is “Death To America.”

In recent week’s people have been wondering if we were going to war with Iran, and as of now, the answer is no. But America wouldn’t have regular crises with the rogue Iranian regime if Jimmy Carter knew what he was doing.