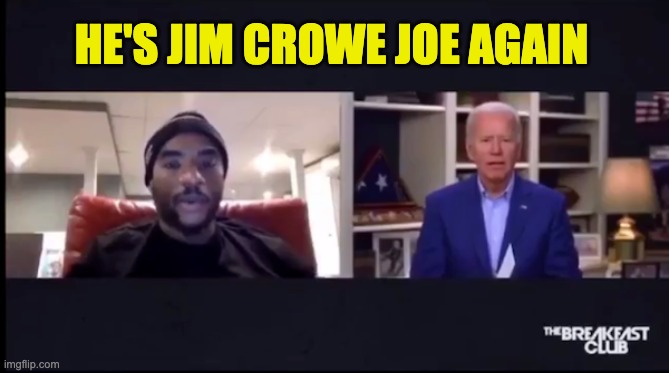 Who knew that it was up to Joe Biden to determine a person’s race? On Friday the presumptive Democratic Party nominee said black Trump supporters “ain’t black.” His condescending statement evoked immediate backlash from blacks all over the country. The statement came during an interview on The Breakfast Club with host ‘Charlamagne tha God.’

“Listen, you gotta come see us when you come to New York, VP Biden because it’s a long way until November and we got more questions,” Charlamagne said.

“You got more questions? Well I’ll tell you, if you have a problem figuring out whether you’re for me or Trump, then you ain’t black,” Biden shouted.

“It doesn’t have nothing to do with Trump,” the radio host replied. “It has to do with the fact I want something for my community.”

“Take a look at my record, man. I extended the voting rights 25 years, I have a record that is second to none. The NAACP has endorsed me every time I’ve run. Come on, look at the record.”

A shocked Sen. Tim Scott who per Biden is not black told Stewart Varney on Friday that presumptive Democratic presidential nominee  made the “most condescending and arrogant comments toward the black community he has ever heard.”

“And President Trump comes along, and through his criminal justice reform, corrects the absolute mistakes made by Joe Biden; 1.3 million African-Americans voted for Trump,” Scott said. “He’s saying to 1.3 million African-Americans that you are not black? Who in the heck does he think he is? That is the most arrogant, outrageous comment that I’ve heard in a very long time and I take offense to that.”

The newly un-black senator also expressed his feelings on twitter.

1.3 million black Americans already voted for Trump in 2016. This morning, Joe Biden told every single one of us we “ain’t black.” I’d say I’m surprised, but it’s sadly par for the course for Democrats to take the black community for granted and brow beat those that don’t agree.

The Twitter response was explosive and the hashtag #BidenIsARacist was trending.

This isn’t just a “gaffe.” Racist Joe Biden has made this kind of statement before.

“Biden’s comment is beyond disgusting; it’s flat-out racist. Remember, this is the same Biden who condescendingly described Obama as the “African-American who is articulate and bright and clean.” Racist then, racist now.” @brazen_infidel

Then there are that whole “Poor kids are just as bright and just as talented as white kids.”

#QuidProJoe: "Poor kids are just as bright and just as talented as white kids."

Once again, a ‘White #Liberal’ trying to define ‘Black’— @realDonaldTrump has done more for Blacks in 3 years than Biden has accomplished for Blacks during his entire life. #KAG ?? #Trump https://t.co/nYyG9dCPWb