Do They Make Kosher Breakfast Tacos? 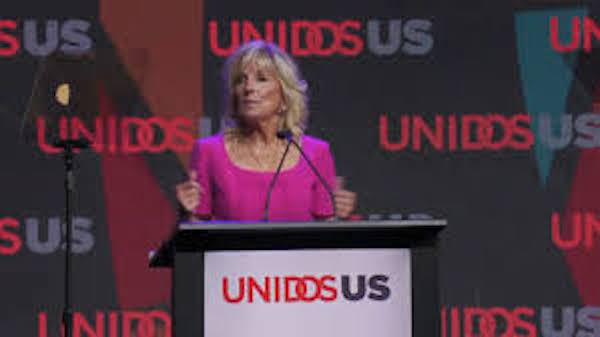 During a speech Monday at “Siempre Adelante: Our Quest for Equity,” honoring the work of Raul Yzaguirre, president of the UnidosUS, the country’s largest Latino civil rights advocacy group. The wife of the presidential gaffe machine said

“Raul helped build this organization with the understanding that the diversity of this community, as distinct as the bodegas of the Bronx, as beautiful as the blossoms of Miami and as unique as the breakfast tacos here in San Antonio, is your strength,”

Unique as breakfast Tacos? I don’t believe she was being bigoted, just stupid.

Leading up to the taco gaffe, she mispronounced the word, Bodega.

Once again, Dr. Jill Biden butchers the Spanish language in furtherance of pandering to a client constituency (the org FKA National Council of La Raza). I hereby bless your timelines with Dr. Jill's rendering of "bodega". pic.twitter.com/Z4FSXtlUMe

It’s hard to criticize her for the Bodega pronunciation. After all, Joe has been in public office for 49 years. Most probably, she hasn’t been to a general market supermarket. The chance she went to a Latino market is even more remote.

The National Association of Hispanic Journalists was not pleased:

“Using breakfast tacos to try to demonstrate the uniqueness of Latinos in San Antonio demonstrates a lack of cultural knowledge and sensitivity to the diversity of Latinos in the region,” the organization wrote. “NAHJ encourages Dr. Biden and her speech writing team to (take)the time in the future to better understand the complexities of our people and communities.

“We are not tacos. Our heritage as Latinos is shaped by various diasporas, cultures & food traditions. Do not reduce us to stereotypes.”

That’s one of the big problems with Democrats. They divide Americans by their backgrounds, African-Americans, Asians, Hispanics, etc.

But they don’t understand. It’s not bad that they try to reach these groups using specific media. But these different backgrounds want the same thing as “white” Americans. To feed their family, send their kids to a good school, have enough police to protect their families, etc.

America is not a melting pot. It’s a gumbo. In other words, we are one united country with the same goals, but we sprinkle it with our ethnic backgrounds, but our family comes first.

I'm an American who was born to legal Mexican immigrants.

I do not identify as Latinx.

I do not identify as a bo-guh-da.

I do not identify as a breakfast taco, either.

Husband and wife gaffing together not out of anger but out of stupidity–neither one should be allowed to speak in public.

“The first lady apologizes that her wo rds conveyed anything but pure admiration and love for the Latino community,” Michael LaRosa, the first lady’s spokesman, said.

Basically, the apology said, ‘I am sorry you didn’t understand what I said?

A better apology would have been something like, “I screwed up, I’m sorry?’ But it seems Jill Biden is like her husband in another way, blaming others for her mistakes. It could have been worse. At least she didn’t say Putin wrote her speech.

Either way, her apology was bo-ga-us.