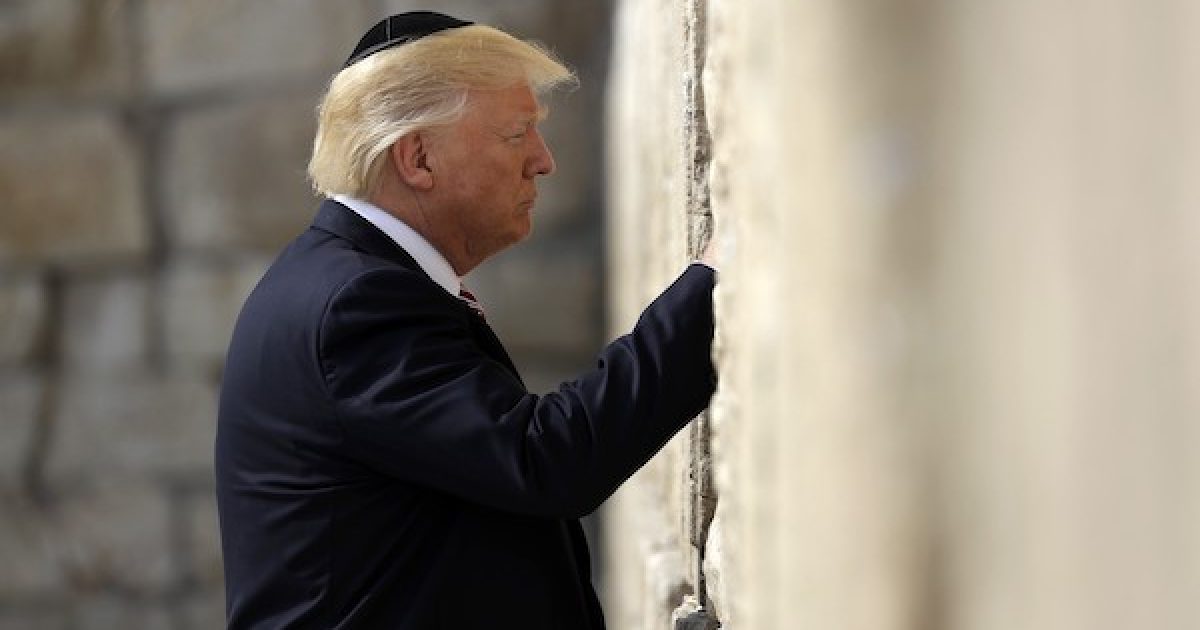 Answering press questions on Tuesday President Trump commented  “Any Jewish people that vote for a Democrat — I think it shows either a total lack of knowledge or great disloyalty,” While the Democrats, media, and liberal Jewish organizations (which covers most of them) are generating so much anger at what the President said they might lose their bowels. The Dems are even spinning his words. Trump wasn’t talking about disloyalty to America, he was talking about disloyalty to the Jewish people, and  President Trump is 100% correct.

Over thirty years ago Secretary of State James Baker said: “F**k the Jews they won’t vote for us anyway.” But because most American Jews’ Blind Democratic Party Loyalty no matter what, today, the Democratic Party attitude is “F**k the Jews they will vote for us whatever we do!” So to please their far liberal base, they’ve drifted toward Antisemitism, and they know they won’t lose many votes and that hatred goes way beyond the BDS of Omar and Tlaib, and has been happening for years.

My first article warning that the Democratic party was becoming anti-Semitic was posted on January 29, 2007. Eleven years later the party’s Antisemitism had metastasized and infected much of the party.  In 2003 former Congressman James Moran (D-VA.) made the false charge that the leaders of America’s Jewish community sent America into war in Iraq to benefit Israel, a charge that Democratic Party President Barack Obama repeated in 2015

Louis Farrakhan was justifiably criticized for calling Jews termites, but before Farrakhan, Hank Johnson (D-GA) used that phrase. At an event at the 2016 Democratic Convention Johnson, who once worried that too many people on the island of Guam might tip it over, called Jewish people who live in disputed territories to “termites” that destroy homes. Johnson said it during an event sponsored by the U.S. Campaign to End the Israeli Occupation, an anti-Israel organization that galvanizes supporters of the Boycott, Divestment, and Sanctions movement, or BDS.  After his comment caused an uproar, Johnson gave a half-hearted apology. He was sorry about offending but wasn’t sorry for saying it or even or recognized that it was anti-Semitic.

What did the Democratic Party say about Johnson’s Antisemitism? Nothing.

Maxine Waters is another believer in the AIPAC Jews controlling America anti-Semitic canard: Earlier this year a video was released of Waters embracing Louis Farrakhan. Asked multiple times whether she still supports the anti-Semitic Nation of Islam leader, Waters refuses to answer. At a 2012 luncheon,  Waters announced her belief in one of the anti-Semitic canards, she said she won’t take money from AIPAC because as she suggests it has too much power over congress.  See the video below:

Senator Patty Murray is not an anti-Semite. She just doesn’t care about antisemitism In January 2018 a Senate committee was evaluating the nomination of Ken Marcus for the position assistant secretary for civil rights at the Department of Education. Mr. Marcus was subjected to an aggressive slander campaign by leading anti-Israel groups seeking to kill his nomination because he has worked to combat the anti-Semitic boycott, divestment, and sanctions (BDS) movement on college campuses and is the founder of the Louis D. Brandeis Center for Human Rights Under Law, a group that among other things fights Antisemitism. When meeting with Marcus supporters, a senior policy adviser to Democratic Senator Patty Murray said her office in the U.S. Senate Committee on Health, Education, Labor, and Pensions (HELP) does “not care about anti-Semitism,” according to two people who attended the meeting. After those comments became public, Patty Murray did not comment on her policy advisers statement.  In other words, she did not care about her staffer’s “not caring.”

In 2011 the DCCC published a petition looking for 100,000 signatures in support of Occupy Wall Street which had already been proven to be Antisemitic. President Obama and other Democrats also supported OWS.

In 2011 House Majority Whip, James Clyburn appeared in an event with Jew-hater Louis Farrakhan. Rabbi Abraham Cooper,   of the Simon Wiesenthal Center in California, wrote in a Pittsburgh Post-Gazette op-ed.

Saying Americans should separate the positive message (black empowerment) from the bad (anti-Semitism) just doesn’t cut it anymore. Rev. Farrakhan does not deserve the respectability of having Rep. James Clyburn of South Carolina sit alongside him. We hope Mr. Clyburn follows the lead of Melanie Campbell and withdraws from the Pittsburgh event.

Clyburn told Farrakhan’s hate-magazine “Final Call” that he was “not bothered in the least bit” by those criticizing him for appearing at the event with the Jew-hating Farrakhan.

Rep. Clyburn also has a nasty habit of debasing the suffering of Holocaust victims.

Many of the Democrats in power who are either supporters of the anti-Semitic Louis Farrakhan including 21 members of the Congressional Black Caucus), or fans of the anti-Semitic Linda Sarsour who have shared platforms with her including Jerrold Nadler, Nydia Velasquez, Brad Sherman, Mike Quigley, Al Green, Robin Kelly, Jamie Raskin, Donald McEachin, and New York Governor Andrew Cuomo who for some reason announced his belief that Jews can’t dance, an indication that it is he who is the family Fredo.

A new member of Congress whose hatred is ignored is representative in NY-19th district is Antonio Delgado.  Delgado was supported by anti-Israel group J-Street and made a statement during a debate that Israel was not a democracy,

Notice that Delgado was emphasizing those darn anti-democratic joos? And the basics of what he was saying was a lie. In Israel, all citizens of Israel have the right to vote no matter what their background. He forgot to mention that as soon as Israel pulled out of Gaza it became a terrorist base or the fact that at least twice Israel offered to give the Palestinians in Judea and Samaria about 98% of what they wanted  (once during the Clinton presidency and the other during Bush #43) and both times their offer was refused.

Democrats such as NY’s Kirstin Gillibrand protected anti-Semites in the Women’s March such as Linda Sarsour and Tamika Mallory. Despite that people finally realized what this site has been warning for two years and that the Wiesenthal Center begged her to withdraw her support for the two anti-Semites, Gillibrand has not removed her support and has continued to speak at the Women’s Marches.

Al Sharpton is a card-carrying anti-Semite who led two anti-Semitic pogroms in NYC. He was a regular visitor at the Obama White House, and Democrats fawned over Sharpton his 60th birthday gala in 2014. It was attended by Democrats like Chuck Schumer, Kirsten Gillibrand, and Jerold Nadler. Despite his hatred of Jews, most of the 2020 Democratic Candidates visited Sharpton to kiss his ring,  The visits to kiss the Sharpton ring of hate does not mean those candidates are anti-Semitic, it just means they condone Antisemitism.

A year ago, D.C. Council member Trayon White Sr. (D-Ward 8) posted a video on Facebook claiming the Rothschilds (meaning the Jews) controlled the weather, then upon receiving push-back, he changed his mind and apologized. But before he could be forgiven, he did it again. At a city council meeting, White claimed, “There’s this whole concept with the Rothschilds—control the World Bank, as we all know—infusing dollars into major cities. They really pretty much control the federal government, and now they have this concept called resilient cities in which they are using their money and influence into local cities.”

There are many Democrats in power who are either supporters of the anti-Semitic Louis Farrakhan (21 members of the Congressional Black Caucus) and fans of the anti-Semitic Linda Sarsour. Those who have shared platforms with Sarsour include Jerrold Nadler, Nydia Velasquez, Brad Sherman, Mike Quigley, Al Green, to name just a few.

Back in March of 2019 after Ilhan Omar made her second anti-Semitic declaration in less than a month the Democrats who run the House were asked to censure Omar and her hatred. They refused to recognize her Antisemitism; instead, they passed a generic resolution that basically said that being mean to others is a bad thing—big deal, I watched Romper Room as a child also. The Democrats refuse to recognize Antisemitism. It hearkened back to the days when Democratic President FDR allowed about 200,000 Jews to die in the Holocaust because he believed there were enough Jews in America already.

There are two recent Democratic Party leaders with hatred toward both Jews and the Jewish State recently office. Barack Obama, the former President of the United States, is an anti-Semite, as well of the old number two guy in the Democratic Party Keith Ellison who is now the Attorney General of Minnesota (Rep. Omar’s home state).

There are countless other examples reported on this site over the years.

Even the Forward, a left-wing Jewish news site that began as the Jewish Daily Worker, is blasting the Democrats. In their case wasn’t because of the Democrats Antisemitism but for their silence. Their column, “The Left can no longer excuse its anti-Semitism.” was discussed in a great Hot Air article by Ed Morrissey. I highly recommend you read it by clicking here.

President Trump is correct, any Jew who votes for a Democratic is showing either a total lack of knowledge or great disloyalty,  I would add that they are feeding the Antisemitism of the Democratic Party.  Because of the blind loyalty of the Jews to the Democratic Party shows party leaders that anything Democratic the party does most Jews will vote for them. Therefore the party doesn’t have to give a rat’s arse about the Jews. Or as the great Zionist philosopher, Ze’ev Jabotinsky once said;

“It is incredible what political simpletons Jews are. They shut their eyes to one of the most elementary rules of life, that you must not “meet halfway” those who do not want to meet you”