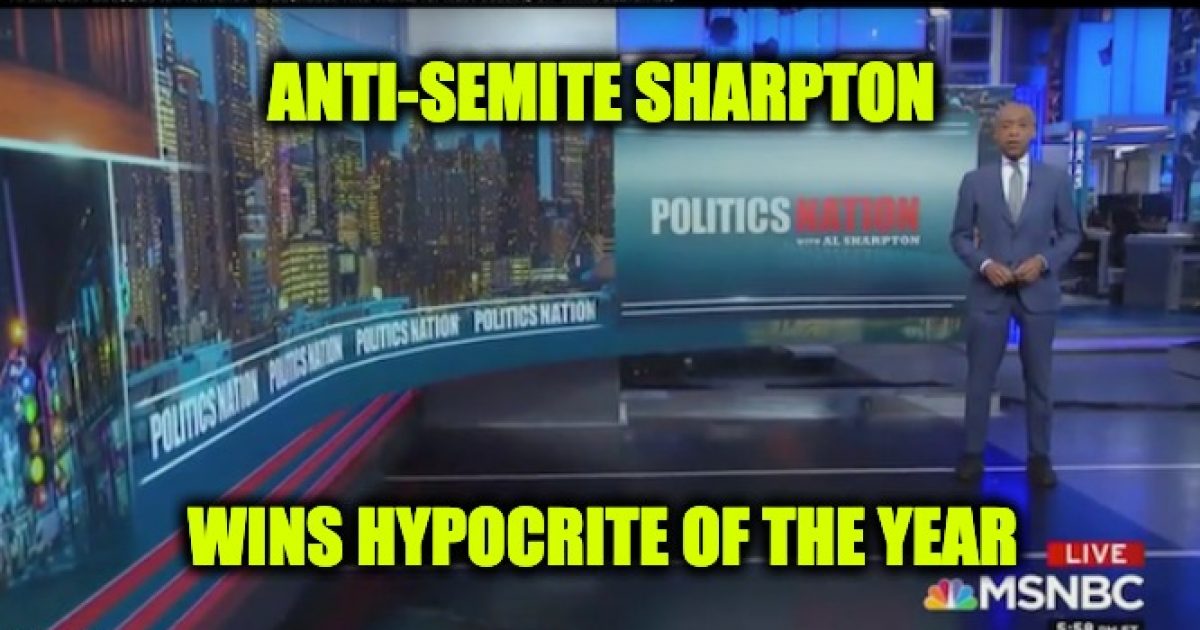 If there is a Nobel Prize for mendacity or an Oscar for hypocrisy, this statement by Al Sharpton would get the award.  This scumbag who calls himself a Reverend and a Human Rights leader has spent a lifetime spreading Antisemitism but never acknowledged or apologized has the nerve to talk about the need for Trump to fight Jew-hatred. Just the fact that he mentioned Antisemitism gave me the creeps.

Allow me to pin on my yarmulke on and explain. Jew-Hater-Sharpton

I found this transcript and video on the great website Mental Recession.

President Trump said that because of the killing of Al Baghdadi, that the world is a better place. And I would give credit to he and those that were responsible for it. But we have a lot of work that must still be done in the area of terrorism. In the same area of the world where Al Baghdadi was and in our own nation. Where a year ago today, we saw in Pittsburgh at the tree of life synagogue 11 people killed by a domestic terrorist. We see the threat of domestic terrorism, hate groups, even FBI director Chris Wray said that white supremacy is a major part of that in this country. We must be committed to fighting terrorism all over the world, but we cannot duck the rise of hate groups and terrorism at home. And remembering this one year ago today, what happened in Pittsburgh at Tree of Life, ought to make us all say yes, give credit for what happened with the leader of ISIS. But let’s not forget the sobering memory of 11 lives lost and many others that were lost to those domestic terrorists that are bent on hate and bent on white supremacy and anti-Semitism and racism and homophobia. We have to fight terrorism, hate, and people taking lives on all fronts, and yes, give credit when we win, but don’t think the battle is over because we fought one fight. We must continue, and we must be operating with a sense of urgency. That does it for me. Thank you for watching.

Remember the Tawana Brawly Hoax? What most people don’t remember is that Al Sharpton  refused to meet Abrams during the Tawana Brawley hoax because meeting AG, who was Jewish, would be “like asking someone who watched someone killed in the gas chamber to sit down with Mr. Hitler.” Comparing a Jew to Hitler? Now there’s a friend of the Jews.

In the month before the Crown Heights Riot when Sharptonwhen NYC Jews complained about the Antisemitism of Black College professor Leonard Jeffries.  Sharpton called them race-baiters, adding, “If the Jews want to get it on, tell them to pin their yarmulkes back and come over to my house.”

On the second day of the Crown Heights riot according to the sworn testimony of Efraim Lipkind, a former, resident of Crown Heights, Sharpton started agitating the crowd.

After days of anti-Jewish rioting in Crown Heights, at the funeral of Gavin Cato, the little boy who was riding his bike and was accidentally hit by a car in the Rebbe’s precession,  Al Sharpton gave a powerful eulogy inspiring hatred and Antisemitism:

Although they weren’t Jewish, Angelina Marrero, Cynthia Martinez, Luz Ramos, Mayra Rentas, Olga Garcia, Garnette Ramautar, Kareem Brunner, the seven victims of the massacre at Freddy’s Fashion Mart are dead because a four-month-long anti-Jewish campaign of hate by Al Sharpton that incited a man to firebomb the clothing store killing the seven innocents.

Lately, Sharpton has tried to make nice with the Jewish People,  but he’s never apologized for any of the above.

In August 2014, Politico.com published a feature story titled, “How Al Sharpton Became Obama’s Go-To Man on Race.”The piece stated that “Sharpton not only visits the White House frequently, he often texts or emails with senior Obama officials such as [Valerie] Jarrett and Attorney General Eric Holder. Really? If he cares so much about Antisemitism why didn’t he chide Obama for his eight years of Jew-Hatred?

And if he really wants to fight Jew-hatred, why does he support Louis Farrakhan?

The truth is that Al Sharpton is a fraud as well as a hater. The Democratic candidates who felt the need to get his blessing, the New Yorkers such as Gov. Cuomo and Chuck Schumer who recently attended his birthday gala and the former conservatives who kiss up to him such as Joe Scarborough and Hugh Hewitt should all be ashamed of themselves.