If She Is A Conservative, I'm A Young Skinny Guy With A Full Head Of Hair 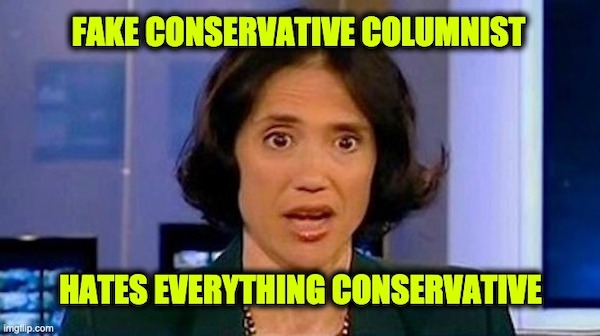 On Wednesday, Jennifer Rubin tweeted the latest of a very long list of her anti-conservative hit-jobs. She falsely claimed that President Trump wants to kill children.

She made the blatantly false claim on Twitter in response to an article at The Hill, which said the president threatened to cut funding for schools that refuse to open for in-person learning this fall.

“[N]ow he wants to kill your kids,” she claimed in her fact-free tweet.

now he wants to kill your kids https://t.co/6VvGsIQv4d

The same could be asked of Rubin.  Why does she want to starve children?  Many kids get their best meals as part of a school lunch program. If the children do not attend school, one parent will have to stay home and watch the kids.  In single-parent households, it’s the only working parent, who may lose their job when that parent stays home. But either way, there will be a loss of income. Will that loss of income force parents to cut down on food for the family? Clothes? Medicine?

When this page started writing that Rubin spent more time bashing conservatives and conservative principals than supporting them, many of my conservative friends told me to give her a chance, she wasn’t that bad. That changed as they began to realize she was a fraud.

Dan Riehl once explained that “Jennifer Rubin is a Berkley graduate and former labor lawyer who became a Republican because of the Democratic party’s terrorist-appeasement oriented foreign policy. But conservative positions go way beyond supporting a strong military and favoring a strong response to terrorism.  There are other positions, such as fiscal responsibility, that are important also.

Steve Hulett, a labor leader in Hollywood, knew Jenifer Rubin when she was a labor lawyer, He wondered about her supposed switch to conservatism. Hulett says:

he knew Rubin well from 2000 to 2005 when he was president of the Animation Guild, a labor union representing animation and visual effects artists, says her politics were those of a mainstream California Democrat right through the 2004 election. “She talked like a straight-ahead Hollywood liberal.” We used to chew the fat all the time in her office and over at lunch at Café del Sol near Dreamworks. She supported Kerry in 2004 and worked closely with [Jeffrey] Katzenberg, who is a big time Democratic donor. I didn’t know what to think when she moved east and started blogging like mad as a conservative. I don’t know if it’s a marketing pose, or if she really believes it, or what. But it is odd.

Well, Steve, based on her track record at WAPO, she has proven that her supposed conservatism is a pose to get a job. And that she doesn’t really believe in conservatism.

Rubin threw hate at every Republican except Romney during the 2012 primary season. Perhaps because Mittens is a fake conservative just like Rubin.

When Conservative Ken Cuccinelli was running for Virginia governor Rubin spewed hatred at him:

Virginia Attorney General Ken Cuccinelli is a “hard-edged and confrontational” conservative with a “highly divisive” agenda. What’s more, he’s a pouty wimp who “plays the victim” for having called gubernatorial campaign opponent Terry McAuliffe a “bully.

She went beyond being a fake conservative and proved she is an awful human being after then-White House press secretary Sarah Huckabee Sanders was eating dinner with her family and was asked to leave because she worked for Trump. Rubin announced that she too would never serve Sarah Huckabee Sanders‘ in a and that Sanders deserved a “life sentence” for being in President Donald Trump’s administration and “inciting against the press.”

Her attacks on President Trump aren’t even consistent as pointed out by Charles Cooke in National Review: Rubin denounced Donald Trump’s decision to withdraw from the 2015 Paris Agreement as “a dog whistle to the far right” and designed to please his “climate-change denial, right-wing base that revels in scientific illiteracy.” Previously, after Barack Obama had approved the agreement, Rubin characterized it as “nonsense” and argued that it would not achieve anything.  Rubin described Trump’s 2017 decision to withdraw from the Iran nuclear deal as the “emotional temper tantrum of an unhinged president.” But she previously said that “if you examine the Iran deal in any detail, you will be horrified as to what is in there.” Rubin had always supported the United States officially recognizing Jerusalem as Israel’s capital and moving its embassy from Tel Aviv to Jerusalem. Early in his presidency, she even criticized Trump for not making the move yet, saying that it was indicative of his tendency to “never keep his word.” She concluded that Trump “looks buffoonish in his hasty retreat.” But in December 2017, after Trump announced that he would move the embassy, she characterized it as “a foreign policy move without purpose.”

Recently, while appearing on MSNBC, the official network of insane liberal hate, Jennifer Ruben, the Washington Post propagandist, and Mitt Romney groupie claims to be “conservative,” suggested that more Republicans than Democrats would die from the coronavirus. She also spread the fake story that President Trump called the pandemic a “hoax” for weeks.

Even Meghan McCain slammed her for that for those words:

This is ghoulish and craven, even by Jennifer Rubin standards. Why does anyone feel the agency to politicize pain and possible death? It is GODLESS. https://t.co/q9cp7oQn5V

It’s time for Rubin to stop claiming to be what she disparages—conservative. The name column should be changed from “Right Turn” because that title is a lie.

Perhaps its time for the Washington Post to hire a real conservative to blog from the “right side” of issues. Why not hire someone like Ed Morrissey of Hot Air or one of the other great conservative bloggers?