Which Leftist Will Replace Jen Psaki As Press Secretary? 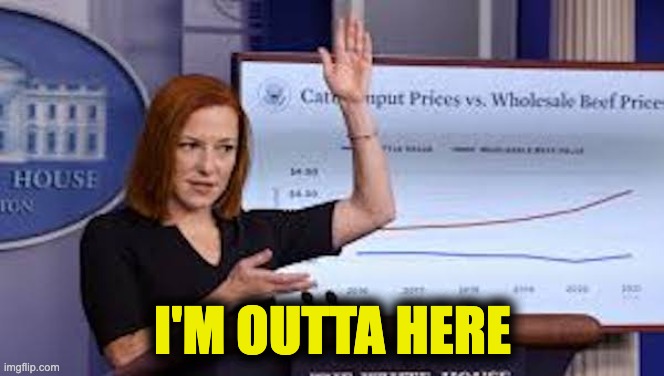 After only 14 months on the job, White House press secretary Jen Psaki is headed for a big cable news payday.

Ethical concerns aside, there’s an opening to succeed her at the lectern.

While the White House hasn’t identified any likely successors, there are several candidates — most already on staff — who will receive consideration. Here they are, in order of likelihood:

She is a black female, which to President Joe Biden means she is eligible for the Supreme Court.

An immigrant, she’s also the top deputy press secretary and has done briefings when Psaki is away.

The 44-year-old radical was a failure as Kamala Harris’s chief of staff during her disastrous 2020 presidential campaign before she landed a plum White House job. She also was the national spokeswoman for the hard left MoveOn.org, a political analyst for MSNBC, and she worked on the failed presidential campaigns of John Edwards and Martin O’Malley.

Being a true far-left Democrat, Karine is anti-Israel.

For example, in an opinion piece she wrote for Newsweek in March 2019, Jean-Pierre praised Democratic politicians for not going to that year’s AIPAC conference, saying, “boldly choosing to prioritize diplomacy and human rights over the power of a lobbying organization.” She made other false accusations and statements about Israel and AIPAC in the same op-ed. She accused AIPAC of “severely racist, Islamophobic rhetoric” and “trafficking in anti-Muslim and anti-Arab rhetoric while lifting up Islamophobic voices and attitudes.”

Jean-Pierre also is gay, so she checks every identity politics box and, additionally, has likely never left the New York/Washington corridor. I probably need not go into other options, but shall, briefly.

Unlike Jean-Pierre, Bedingfield served on a winning campaign as deputy campaign manager for Biden in 2020.

During the campaign, she slammed and released a letter to Times executive editor Dean Baquet, taking issue with an op-ed about the Hunter Biden story written by investigative reporter Peter Schweizer.

When stories of a Harris/Biden conflict began to leak out, Bedingfield criticized Harris’s managerial mishaps, which should be to her credit for stating the obvious.

Bedingfield filled in at the White House daily briefings just last week as triple-vaccinated Psaki and Jean-Pierre came down with COVID-19.

The 39-year-old served in a senior communications role for the National Security Council during the Obama administration.

Price has already been a voice for the Biden team’s left-wing and confusing reaction to Russia’s Ukraine invasion.

Another Obama retread, Kirby would be the best option, which means he has no chance when one reviews Biden’s other awful personnel decisions (Cabinet, vice president, Supreme Court).

Before joining the Obama Administration, USN John Kirby, Rear Admiral (Ret), worked as a diplomatic and military analyst for the left-wing CNN.

Unlike most other Team Biden members, the Pentagon spokesman often appears on Fox News to discuss the controversies of Biden’s presidency, including last summer’s disastrous withdrawal from Afghanistan.

She left Team Harris four months ago for MSNBC due to dysfunction and was initially considered a likely candidate for Psaki’s job.

At 32, Sanders is young but already has worked for two presidential campaigns. Sanders has openly said she hoped to be the first black female press secretary, which could hurt her chances, though it really shouldn’t in the world of Democrats.

Between working on the Sanders campaign in 2016 and the Biden campaign, Sanders was a divisive commentator on CNN. After the Parkland, Fl. shooting, Sanders opined that the shooter would have received different treatment if he was black or brown.v

As press secretary, Psaki received much criticism. In many cases, when faced with a position disagreeing with the administration’s view, she would ridicule the opposition instead of explaining why the administration’s position was more correct. Looking at the latest ideologues who may replace her, however, Team Biden’s leftist message will only worsen.
vvvv
A.J. Kaufman is a columnist at Alpha News and here at The Lid
vvvv
vvvv
Facebook Twitter Flipboard