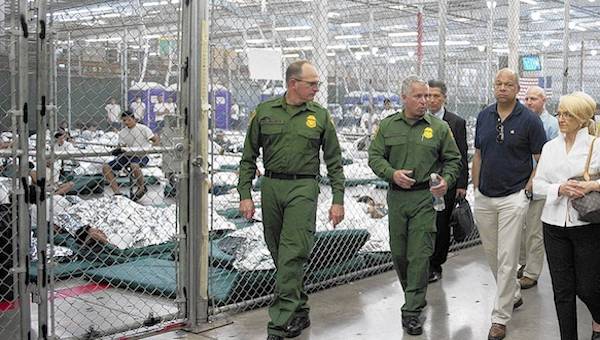 They’re telling us it’s not a crisis as millions of people from almost every country have spent the last year swarming over our Southern border. And we’re about to see more.

Despite frequent scenes in which we see ‘poor refugees’ smuggled in under life-endangering conditions (it’s part of a more significant trend) besides those who have been waltzing in unimpeded across the Southern border, the numbers are nowhere near as bad as they might soon become.

Because until now, there have been Covid-related Title 42 provisions for immigration enforcement to fall back on letting at least some of the illegal entrants be redirected back to the Mexican side of the border.

Despite protests from swing-state officials in his own party, there is every indication that Joe will soon end Title 42, leaving far fewer tools with which border enforcement can send anyone back.

Biden’s first year, by the numbers…

That will have significant consequences. We’ve been dealing with the first year of Biden’s disastrous presidency… notice what they say about Biden having effectively ‘implemented the radical left’s goal of abolishing ICE.’

Additionally, the new ICE removal data reviewed by the Federation for American Immigration Reform (FAIR) indicates that about half of the FY 2021 removals occurred during the first four months of the fiscal year, under the administration of President Donald Trump. Thus, in the last eight months of the fiscal year, under President Biden, only about 27,000 illegal aliens were removed –barely 100 per day.

“At the apex of the illegal immigration surge that began with the inauguration of President Joe Biden, U.S. Customs and Border Protection (CBP) were encountering some 7,000 illegal entrants each day, not including the countless number who went undetected, while ICE was averaging just 100 removals,” observed Dan Stein, president of FAIR.

“For all intents and purposes, the Biden administration has implemented the radical left’s goal of abolishing ICE. It is also noteworthy that the administration’s paltry 100 removals per day in FY 2021 all occurred before Homeland Security Secretary Alejandro Mayorkas issued departmental edicts that bar ICE from arresting and removing all but the most violent foreign criminals and terrorists, and severely restrict where agents are permitted to apprehend them. In other words, removals in FY 2022 will likely plummet even further, all while the administration-induced surge of new illegal immigration continues unabated,” Stein continued.

The Department of Homeland Security (DHS) is preparing to apprehend up to 18,000 illegal immigrants come spring and summer as the weather warms up and Title 42 is expected to be lifted soon.

…To put it another way, the number of mostly Haitians who crossed into Del Rio, Texas, and were forced to camp under the international bridge because there was nowhere else to put them in September 2021 capped out around 15,000. DHS is having to prepare to house, care, and transport more than a Del Rio bridge per day.

White House Communications Director Kate Bedingfield told reporters on Wednesday when Title 42 is eventually lifted, “there will be an influx of people to the border.”

Obama’s Jeh Johnson Puts Those Numbers In Their Proper Perspective…

This was him during the Trump years…

“When I was in office at Kirstjen Nielsen’s job, at her desk, I’d get to work around 6:30 in the morning, and there’d be my intelligence book, sitting on my desk,” Mr. Johnson told MSNBC’s “Morning Joe” crew on Friday. “The PDB and also the apprehension numbers from the day before. And I’d look at them every morning — and my staff will tell you if it was under 1,000 apprehensions the day before, that was a relatively good number. And if it was above 1,000, that was a relatively bad number, and I would be in a bad mood the whole day.”

…“On Tuesday, there were 4,000 apprehensions,” he said. “I know that a thousand overwhelms the system. I cannot begin to imagine what 4,000 a day looks like, so we are truly in a crisis.”

What do you imagine he would say now — supposing he had a dose of some kind of truth serum?

If he was describing one-time surges of 4000 illegal immigrants caught in a single day ‘truly a crisis,’ and that 1000 ‘overwhelms the system’ — what do you think the normalizing of 18,000 a day would look like?

Allen West invoked the word ‘invasion.’ Then, he backed it up with the Constitution.

It’s about time some Governors looked into what authority Allen West was talking about when he described options they had to defend their states when the federal government refused to fulfill their Constitutional duty to defend the border.

America’s enemies are playing for keeps.

It’s about time her defenders were too.