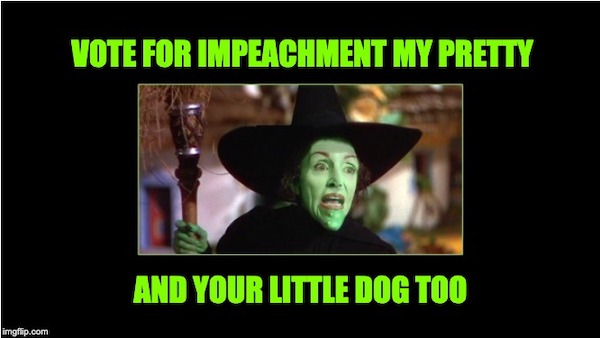 Remember when  Nancy Pelosi said that she wasn’t going to whip the impeachment vote and would let everyone vote their conscience? That was a lie. Rep. Jeff Van Drew, who switched to the GOP right after the impeachment vote, said local Democratic leaders told him to “obey” and vote for impeachment…and where did they get their orders?

.@SpeakerPelosi on Articles of Impeachment: "We are not whipping this legislation, nor do we ever whip something like this. People have to come to their own conclusions."

“They’ll make their own decisions. I don’t say anything?“ Bull Crap!! Pelosi allowing members of the Democratic caucus to think for themselves, is as impossible as Chuck Schumer not running over a few old ladies to get to a TV camera, or Adam Schiff telling the truth about President Trump—it just doesn’t happen.

Pelosi didn’t do the dirty work herself, as former Speaker Tip O’ Neill once said, “All politics is local.”

Rep. Jeff Van Drew (R-NJ) was a Democrat until after the farcical impeachment vote explained that his pressure to vote for impeachment came local party leaders:

“I might have been. Let me tell that story really quickly actually it’s important. So I was speaking to one of the counties, I have eight counties in my district, and I was speaking to one of the county chairs and as I spoke to that chair, he said, I just want to tell you something that you absolutely are going to vote for impeachment and I said no, I’m not, I think that this is a very weak impeachment. I think it’s wasted millions of dollars, hours of time, has not been productive, has split the country apart, has caused a fractioning of the country and literally has caused civil unrest in a sense and he said well I’m telling you if you want to run in this county, you’re gonna have to vote for it, you’re gonna have to obey and the bottom line was that was the final point. There were all of these other issues and I could tell you what some of the other issues were where I believed differently but I kind of went along, but that issue really, the fact that you almost talked quid pro quo so because I’m gonna vote in a way I don’t want to vote you’re gonna force me and then allow me to run. That’s not what America is about, that’s not what our election system should be about.”

But where did the local leaders marching orders come from? There is only one logical place the orders could come from. The ultimate fundraiser…who has every local Democratic Party leader on speed dial…Nancy Pelosi.