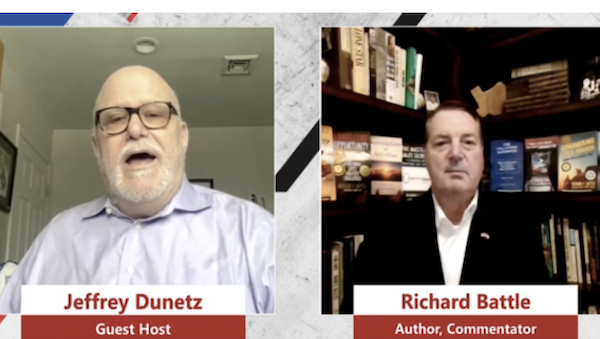 Yesterday Feb,16, Jeff Dunetz, The Lid, had the honor of guest hosting the Schaftlein Report (see video below). My guest was Richard Battle, award-winning author, speaker, media personality, and advisor to companies and politicians. Most importantly, he’s a resident of the great state of Texas. Richard and I had a great conversation about the hot news of the day.

The topics we discussed included:

Make sure to visit Richard’s website: https://richardbattle.com/ and consider purchasing his latest book, Life’s Daily Pleasure. A book filled with inspiring nuggets that encourage, inform, entertain, and lift the readers’ spirit with hope for a brighter future.

Mark will be back for today’s show with his usual Thursday guest (M.E.). But make sure to watch/listen to Mark’s program every Monday-Thursday. It’s always a great show, but to be honest, it’s a little more extraordinary when I’m the guest (my wife thinks so).

Truthfully no matter who’s the guest, you will enjoy tuning into the Schaftein Report every Mon-Thurs. You find the latest episodes with video on the show’s website https://schaftleinreport.com/ and the Schaftlein Report’s Facebook page, which can be found by clicking here. You can als0nlisten to every show on Apple Podcasts here, Audible Podcasts by clicking here, or iHeart Radio at this URL.

Enjoy the Wednesday episode below, and make sure to listen tonight to listen to Mark and me discuss today’s news. But don’t miss any episode of the Shaftlein Report every M-Th. See you later.

Enjoy the video below: