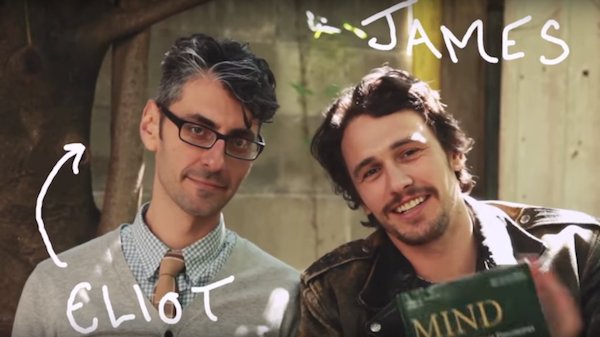 The latest video of actor James Franco and Philosophy Professor Eliot Michaelson YouTube series  Philosophy Time is a classic. Guest Elizabeth Harman, professor of philosophy at Princeton University delivers what is likely the most long-winded imbecilic explanation of why Abortion is moral in the history of long-winded imbecilic explanations, and in the end, her argument is destroyed by James Franco using just

You see, according to Ms. Harmon abortion is moral because it is killing a fetus, and because the fetus is dead it will never grow up and amount to anything. Folks, this isn’t a satire or one of my trademark snarky comments, that is really her argument.  It is hard to believe that she is teaching students at an Ivy League college.

What’s easier to believe is that when Harmon was an “early fetus” the great fairy of stupidity sprinkled fairy dust on her mother’s womb.

Or to paraphrase a favorite line from the movie Billy Madison:

Ms. Harmon what you’ve just said is one of the most insanely idiotic things I have ever heard. At no point in your rambling, incoherent response were you even close to anything that could be considered a rational thought. Everyone in this room is now dumber for having listened to it. I award you no points, and may God have mercy on your soul.

Below is a condensed transcript of her argument and the video of this Philosophy Time segment:

Harmon “I defend the view that there is nothing morally bad about early abortion. So, a lot of people think, ‘Well, it’s permissible to have an abortion, but something bad happens when the fetus dies.’ And I think if a fetus hasn’t ever been conscious, it hasn’t ever had any experiences, and we aborted it at that stage, actually nothing morally bad happens… So, James, when you were an early fetus, and Eliot, when you were an early fetus, all of us I think we already did have moral status then. But we had moral status in virtue of our futures… But some early fetuses will die in early pregnancy due to abortion or miscarriage. And in my view that is a very different kind of entity. That’s something that doesn’t have a future as a person and it doesn’t have moral status.”

Franco: “Can’t you only judge that in hindsight?”