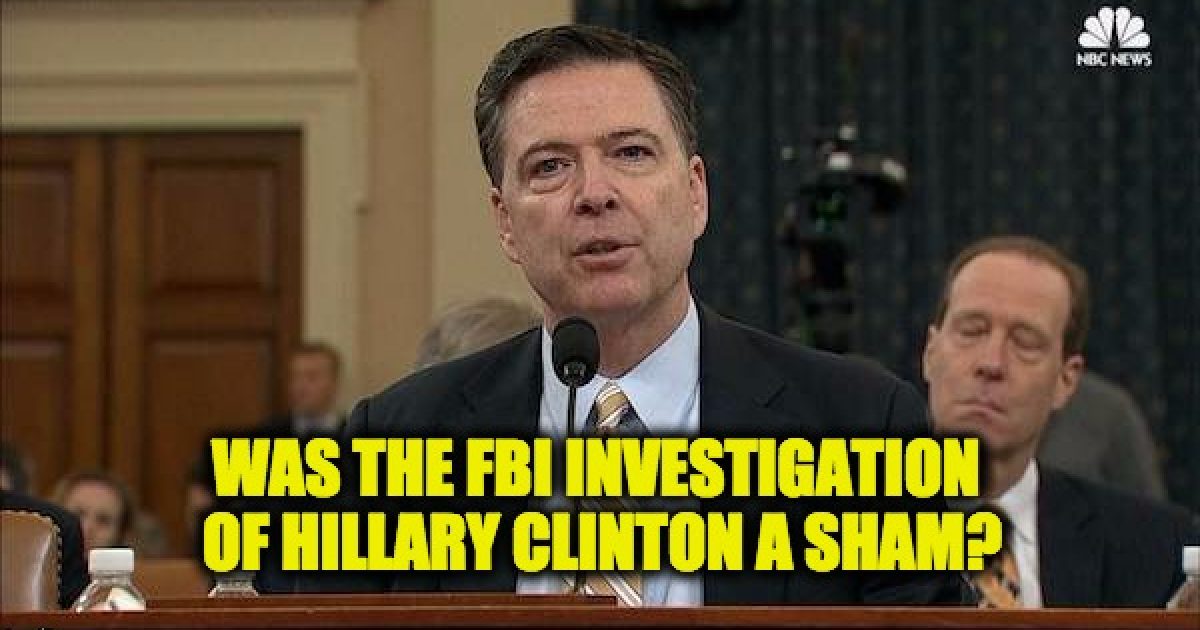 Many people were surprised when we learned that when Hillary Clinton testified to the FBI over 4th of July weekend in 2015, the agents didn’t require her to take the “sworn oath to tell the truth” nor did they record the interview. Now we know why. The fix was in. Even before FBI investigators interviewed key witnesses including Hillary Clinton herself,  former FBI director James Comey had already decided not to refer her for prosecution. Evidence released by Senators Chuck Grassley and Lindsey Graham in a letter to FBI Director Wray, revealed that Comey drafted the exoneration speech sometime in late April or early May a full two months before Clinton’s testimony as well as the testimony of sixteen other key players including Cheryl Mills, Bryan Pagliano, Heather Samuelson, Justin Cooper, and John Bentel

Per the Senators, the way they discovered the information because of a Democratic Party request to investigate Comey:

Last fall, following allegations from Democrats in Congress, the Office of Special Counsel (OSC) began investigating whether Comey’s actions in the Clinton email investigation violated the Hatch Act, which prohibits government employees from using their official position to influence an election. [Note:The OSC permanent, independent investigative agency for personnel matters in the federal government and is not related to Robert Mueller’s temporary prosecutorial office within the Justice Department] In the course of that investigation, OSC interviewed two FBI officials close to Comey: James Rybicki, Comey’s Chief of Staff, and Trisha Anderson, the Principal Deputy General Counsel of National Security and Cyberlaw.  OSC provided transcripts of those interviews at Grassley’s request after it closed the investigation due to Comey’s termination.
Both transcripts are heavily redacted without explanation. However, they indicate that Comey began drafting a statement to announce the conclusion of the Clinton email investigation in April or May of 2016, before the FBI interviewed up to 17 key witnesses including former Secretary Clinton and several of her closest aides.  The draft statement also came before the Department entered into immunity agreements with Cheryl Mills and Heather Samuelson where the Department agreed to a very limited review of Secretary Clinton’s emails and to destroy their laptops after review.  In an extraordinary July announcement, Comey exonerated Clinton despite noting “there is evidence of potential violations of the statutes regarding the handling of classified information.”
In their letter, the two chairmen requested all drafts of Comey’s statement closing the Clinton investigation, all related emails and any records previously provided to OSC in the course of its investigation.

For example one of the redacted transcripts includes this exchange which the Senators believe comes from the interview with Ms. Anderson:

Q:  So moving along to the first public statement on the case or Director Comey’s first statement the July 5, 2016 statement.  When did you first learn that Director Comey was planning to make some kind of public statement about the outcome of the Clinton email investigation?
A:  The idea, I’m not entirely sure exactly when the idea of the public statement um first emerged.  Um it was, I just, I can’t put a precise timeframe on it um but [redaction].  And then I believe it was in early May of 2016 that the Director himself wrote a draft of that statement …
Q:  So when you found out in early May that there was, that the Director had written a draft of what the statement might look like, how did you learn about that?
A:  [Redacted] gave me a hard copy of it…
Q:  So what happened next with respect to the draft?
A:  I don’t know for sure um, I don’t know. There were many iterations, at some point there were many iterations of the draft that circulated…

The letter written by Grassley and Graham (embedded below) raises the key point–whether or not the entire investigation was just for show. “It is unclear whether the FBI agents actually investigating the case were aware that Mr. Comey had already decided on the investigation’s outcome while their work was ongoing”

The Senators point out that the answer to whether or not the investigation was a sham is probably under one of the redactions in the transcripts. But based on what we learned tonight, I believe the answer is already known.