DOJ Was Negotiating Julian Assange Immunity-Cooperation Deal But James Comey Killed It, WHY? 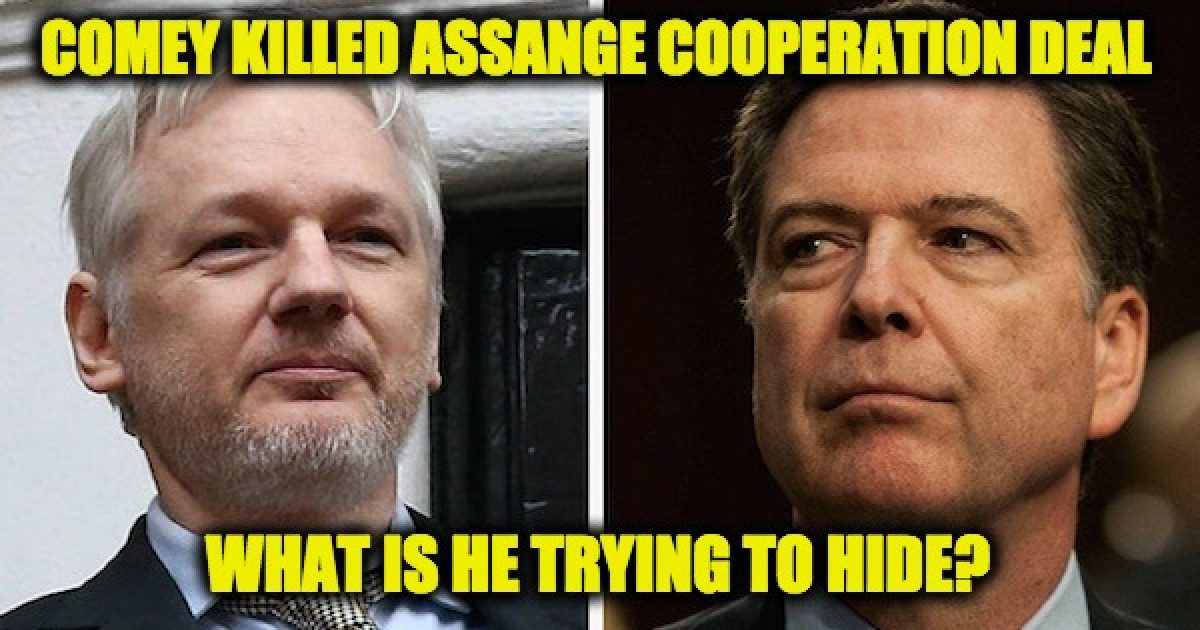 Reporting from John Solomon at The Hill on Monday sheds light on a little-remarked episode in the Russiagate saga from February and March 2017.  It may hold the key to a lot. Solomon’s sources say that during negotiations with WikiLeaks’ Julian Assange, from which the Justice Department hoped to get an immunity agreement and some cooperation with Assange on redacting information from upcoming WikiLeaks data dumps, FBI Director James Comey spiked the whole process.  Because of Comey, negotiations were shut down.

After Comey shut the negotiations with Assange down, attempts to revive them were unsuccessful.  The end result was the devastating WikiLeaks release on 7 April 2017 of a CIA-developed hacking framework with which to build custom malware.  This wasn’t just information about the kind of capability the CIA had; it was code-level data.

In the interim – in early March 2017 – WikiLeaks released a trove of information revealing that the CIA had developed cyber tools that could mimic the profile of Russian hackers, and make it look as if a hack had been done by the Russians when it was actually the CIA.

Both WikiLeaks releases occurred after Comey spiked the negotiations, which occurred in February 2017.  But the odd thing about his intervention is that it apparently was done by going around the Justice Department negotiators.  Comey got the deal-making shut down via another route.

That route was Senator Mark Warner (D-VA).  Long-time Warner associate Adam Waldman, a lobbyist to whom Assange had reached out in January, as the Trump inauguration approached, was brokering the talks and had put Assange in touch with Bruce Ohr and senior counterintelligence official David Laufman at the DOJ.  Their series of contacts had the negotiations in full swing by mid-February 2017.

That’s when Comey weighed in, by going through Warner rather than the DOJ principals.  According to John Solomon, prosecutor David Laufman was determined to go ahead with the deal for Assange.  But Assange pulled back, spooked by the Comey intervention and the mixed signals.  Although the back-and-forth continued into March, Assange never had the confidence he needed to commit to the deal.

Solomon has these comments:

Waldman couldn’t believe a U.S. senator and the FBI chief were sending a different signal, so he went back to Laufman, who assured him the negotiations were still on. “What Laufman said to me after he heard I was told to ‘stand down’ by Warner and Comey was, ‘That’s bullsh**. You are not standing down and neither am I,’” Waldman recalled. …

Multiple sources tell me the FBI’s counterintelligence team was aware and engaged in the Justice Department’s strategy but could not explain what motivated Comey to send a different message around the negotiations through Warner.

The events in sequence

It may help to remember that we’ve heard before about Mark Warner and Adam Waldman trying to make contact with a Russiagate player.  It was at this exact time, in fact – in February and March 2017 – and the target, in that case, was Christopher Steele.

Indeed, a report from Fox News by Ed Henry, in February 2018, contained the very text-message correspondence by Warner that reflected his contact with Comey on shutting down the Assange talks.  But that wasn’t visible in the Fox report, which was focused on the pursuit of Steele.  We are now finding out that one of the texts in Warner’s text history is the one relating to the Comey intervention.

According to Solomon’s timeline, Adam Waldman contacted Bruce Ohr (whom he knew from previous work with DOJ) in January to set up a DOJ contact with Assange.  The first message Solomon’s documentation shows was on 12 January 2017 (a busy day for Russiagate, as readers, will remember).  Waldman himself met with Assange three times in London between then and 3 February, when Waldman and Ohr connected in person in Washington.

Waldman and Laufman were linked up within 24 hours, and the negotiations through Waldman took off with Assange.

It’s worth noting something quite impressive in the next few days, although it might not seem to be directly related to the Assange timeline.  On 8 February, Comey went to see Trump at the White House.  His memoranda on communications with Trump are posted on the FBI records site and include a brief email series memorializing the Oval Office visit.

The subject line under which the entire series occurred was “Sen. Warner Call.”  In other words, the emails about Comey’s visit to the White House that day were sent under that subject line.

The correspondents in the series were Comey and his chief of staff James Rybicki.  The exchanges occurred as follows (all dates 8 February 2017):

Please call [redacted] at 6:45 PM. His EA will answer and connect you.

Was this set up as a result of my request? I had asked Jason.

Meeting is done. Took me to oval. Will be doing another memo. Respectfully,

No. Request of the Senator.

Also sat and chatted with Mike Flynn in lobby.

Thus, while Warner’s friend Waldman was working the Assange negotiations (and, as we also learned later, trying to arrange a meeting with Christopher Steele), Warner was apparently involved in setting up the Oval Office meeting between Comey and Trump on 8 February.

It was a little over a week later that Comey intervened to shut down the Assange offer.  The Fox story from February and the Solomon article on 25 June both reflect the intimation of this event in the same text message exchange between Waldman and Warner, which took place on 16-17 February 2017.

Have had important call about ur message will have answer tomorrow

The critical call was from James Comey, and the answer was: Stand down.  Solomon:

“He told me he had just talked with Comey and that, while the government was appreciative of my efforts, my instructions were to stand down, to end the discussions with Assange,” Waldman told me [John Solomon]. Waldman offered contemporaneous documents to show he memorialized Warner’s exact words.

David Laufman did come back with the counter-order to keep the negotiations going.  Which is interesting in itself, because it seems to make clear that Comey and the DOJ staff were at odds on this matter.

But Assange never felt assured that he could rely on the terms and commitment after Comey pulled the rug out from under the initial process.

About three weeks later, on 7 March, the first of the WikiLeaks dumps on CIA data was released.

Now I want to recall something reported last year when I wrote that release up.  Besides the fact that government officials were acknowledging the truth of the revelations from that dump (e.g., that the CIA could mimic Russian hackers in its cyber-skulduggery), the officials also said they had known since late 2016 about the breach of CIA security that resulted in the WikiLeaks release.

U.S. intelligence and law enforcement officials said on Wednesday that they have been aware since the end of last year of a security breach at the CIA that led to anti-secrecy group WikiLeaks publishing agency documents on its hacking tools.

The officials, who asked not to be identified, told Reuters that they believed that the documents published by WikiLeaks on Tuesday were authentic.

Investigators were focusing on CIA contractors as the likely source of passing materials to WikiLeaks, the officials said.

… an FBI investigation of the CIA leak was just opened on Wednesday, 8 March [2017].

It’s a good question why the investigation was just launched today, if officials have known since last year that there was a leak.

It’s an even better question now that we know James Comey shut down the negotiations with Assange, which were intended to limit the damage from the leaks in exchange for limited immunity.

What was Comey doing?

These unusual activities on Comey’s part make interesting food for thought, juxtaposed with his persistent refrain that he stepped in to exonerate Hillary in July 2016 because of Russian-hacked information, gained by U.S. intelligence, that Loretta Lynch had assured the Hillary campaign she wouldn’t let the email probe “go too far.”  (Again, a never-proven allegation.  See the link for more.)

At this point, we do have to wonder.  Was it really the Russians who (again, allegedly) hacked Democratic emails and (allegedly) caught Debbie Wasserman Schultz telling a Soros staffer that Lynch had passed on that assurance to a Hillary aide?

If it wasn’t the Russians – if it was maybe the CIA – was there a reason why Comey wouldn’t want to limit how much of that became visible through a WikiLeaks dump?  If U.S. officials knew about the compromise of CIA data, they had a pretty good idea what was in those pilfered files.  Why would Comey go around the DOJ negotiators to shut down the talks with Assange?  That guaranteed the exposure from the CIA data dump would be worse than it had to be.

Is it for the same reason, then, that Comey has been rather weirdly persistent with his tale about wanting to protect the Hillary email probe from the appearance of corruption, suggested by the “Russian-hacked intelligence” story involving Lynch and Wasserman Schultz?  Why would he keep mentioning that little theme-let in his representations to Congress and the public?

Does Comey want to foster a narrative that hints at CIA complicity in collecting (or maybe just having) information about other figures in the Obama administration?  It wouldn’t be hard to think of a motive for that – but it would certainly open a can of worms.

Meanwhile, Mark Warner’s agency in so many situations in that short period last year is certainly noteworthy.  It does leave me wondering if it was really just for himself that Warner was trying so hard to set up a meeting with Christopher Steele.

But I am left with two principal take-aways.  One is that the level of knowledge Obama agencies have repeatedly shown about IT system compromises is inconsistent with their occasional, convenient-seeming expressions of surprise about such compromises, or about things that were being done on their computers, or on the computers of key organizations like the DNC and the Hillary campaign.

The main thing that means is that they didn’t really have to struggle to reconstruct what had happened, in the months after the public found out about it.  In a number of cases, it’s a good bet they knew either in real time, or at least well before disclosures were made to the public.

That leads to the second takeaway – one that never seems to change.  They knew.  They watched.  They monitored.  Either they’re making up fairy stories now about how much they knew – e.g., that CIA cyber tools had been pilfered; that U.S. intel had Russian-hacked intel on the cyber correspondence of Democratic officials – or they really did know that much; in which case, they’ve been playing dumb about a lot of things.

And yet in all that knowledge, watching, and monitoring, they never found anything to nail Trump with.

This Mueller “investigation” is so dirty and tainted by all its ancillary features, it can never be used to go after Trump anyway.  But if there were anything to go after him for, we’d have to know it by now.

Home Invasions: All the Ways the Government Can Lay Siege to Your Property
March 2nd, 2021 Sons of Liberty Media