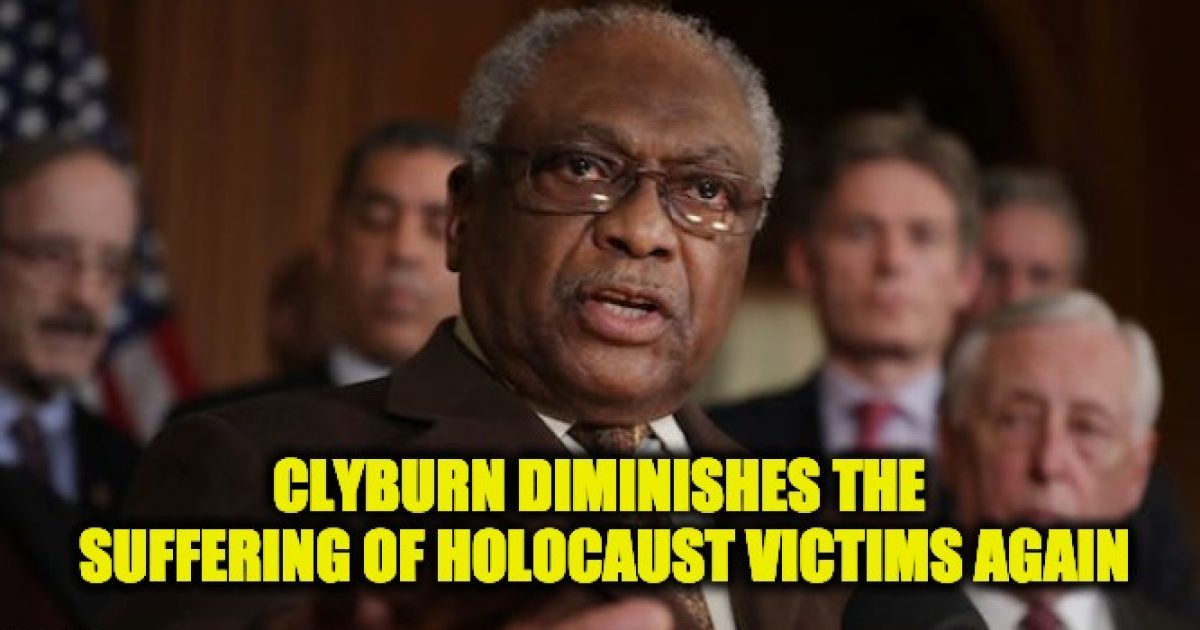 He did it again. For the second time in a month and the third time in memory,  House Majority Whip, James Clyburn has made inappropriate references to the Holocaust which only serve to reduce the perception of the horrors suffered by victims at the hands of Hitler and the Nazis.

In an interview with NBC News Clyburn (D-SC) compared President Donald Trump to Adolf Hitler, saying the president and his family are the “biggest threat to democracy” in his lifetime.

As quoted by Politico, Clyburn said:

“Adolf Hitler was elected chancellor of Germany. And he went about the business of discrediting institutions to the point that people bought into his stuff,” he said, arguing later that Hitler’s shift from chancellor to dictator is an often overlooked part of history.

“Nobody would have believed it now. But swastikas hung in churches throughout Germany. We had better be very careful,” Clyburn said.

Less than three weeks ago when defending the Antisemitism of Rep. Ilhan Omar compared her suffering to that of the Holocaust sufferers and basically told the children of Holocaust survivors to shut up. Clyburn’s position seemed to be that because she had a  bad experience in a Kenyan refugee camp, it was okay Rep. Omar to spew some of the worst anti-Semitic stereotypes, even canards that were used by the Nazis to generate hatred of the Jews.

Clyburn’s words were so hurtful that the Anti-Defamation League, which is more like a progressive arm of the Democratic Party than an Anti-Defamation organization  made an extremely rare criticism of a liberal:

To put this tweet in perspective, this is the same ADL that warned Jews not to criticize Obama for his Antisemitism and told Jews to lay off Keith Ellison when he was running to head the Democratic Party.

“The people of Germany believed Hitler’s foolishness that led to the Holocaust. They believed that stuff,” Clyburn said. “People will tend to believe what they hear through the media.

Clyburn singled out “extreme right-wing” bloggers in particular for criticism. He accused such bloggers of forcing Shirley Sherrod to resign from the Department of Agriculture after misrepresenting statements she made to make her appear racially biased. He also said they had libeled the progressive group ACORN, leading to the group’s disbandment.

What is it with Clyburn? Why does he insist on reducing the perception of the suffering of the 6 million Jews who suffered through the Holocaust, those who survived the Holocaust horrors and the Jews who mourn their pain today and every day?

Perhaps it’s because of Clyburn’s friendship with Louis Farrakhan, in 2011 he wrote in the magazine of The Nation of Islam, called The Final Call, “I want to thank Min. Farrakhan for offering up a number of precepts that we ought to adhere to.”

Based on his constant debasing of Holocaust suffering, we know which of Farrakhan’s precepts to which Clyburn is referring.