Why Is Rep. Clyburn Allowed To Use The Holocaust As A Political Weapon? Where’s The Media? 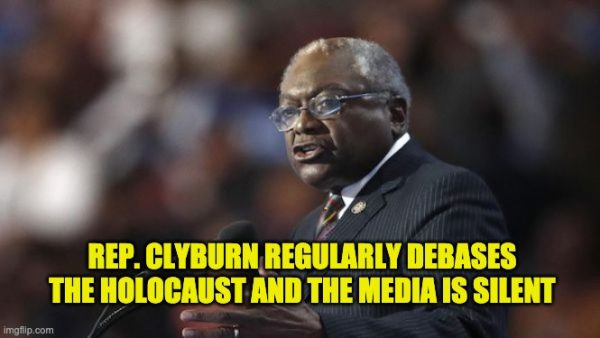 It’s a basic rule of American politics, never use the Holocaust or any of its related terms such as Nazis or Hitler, for political warfare. The Holocaust is a singular event in world history and not just because of its scale and inhuman horror. Yes, there have been, and sadly will be other genocides of other groups, and there have even been other atrocities against the Jewish people.  But generally, a genocide is waged to suppress a group, keep them out of a countries politics, or to take their land or some other economic reason.  The Holocaust was different– the Jews targeted by Hitler, and the Nazis had no desires to take over the country’s land and held relatively little power–they were just hated. The Nazis took Jews from all over Europe and killed them. Rep.James Clyburn continually uses the Holocaust as a political weapon without facing any criticism from the mainstream media. Rep. Clyburn Holocaust

His latest inappropriate reference was Sunday night during an interview on the Axios program on HBO:

I used to wonder how could the people of Germany allow Hitler to exist. But with each passing day, I’m beginning to understand how. And that’s why I’m trying to sound the alarm.”

Clyburn compared Republicans’ coalescing around Trump to Nazis supporting Hitler amid his rise to power. He argued that falsehoods in Trump’s State of the Union address showcased the issue.

“Fully half of those lies, the Republican side of the House stood up and cheered they knew that was not true. But they cheered him on. I really believe that the people of Germany knew Adolf Hitler was lying. And before they knew it, they no longer had a chancellor but a dictator. Anything that’s happened before can happen again.”

Clyburn started his answer by explaining that he’s a student of history. But his Hitler reference shows his lack of understanding of the Holocaust. Hitler references inappropriate because their hyperbolic nature cheapens the memory of the actual horrors that millions of people, including six million Jews (1.5 million of them were children). Perhaps he believes Americans rea are not intelligent enough to understand his prose unless narratives are blown way out of proportion, or maybe he lacks the semantic agility to craft the appropriate prose to interest and inform an audience. Perhaps he lacks the semantic dexterity the case because Clyburn has used inappropriate Hitler references before.

After the Charlottesville incident in 2017, Clyburn said Trump was like Hitler. He did it again, in January 2018 Clyburn was on the Don Lemon show comparing America today to the election of Hitler:

“Having studied history and having taught history, I can only equate one period of time with what we are experiencing now and that was what was going on in Germany around 1934 right after the 1932 elections when Adolf Hitler was elected chancellor,” Clyburn said.

What a distortion of history Trump is neither a bigot or a fascist. If Clyburn is was really a history teacher, he would know that as a system where the government controls everything, including the means of production, in other words, fascism is a socialist system.  And while Putin is most assuredly a despot, he is not a Hitler nor is his iron-fisted rule in the same universe as the Holocaust. Clyburn’s words diminish the memory of the Holocaust, or as it is called in Hebrew, השואה, the Shoah.

On March 7th of 2019,  when Rep. Omar’s anti-Semitism first became an issue, Clyburn worked to protect Omar. He talked about her experience in Sudan and in Kenyan refugee camps and, in the process, slammed the children of Shoah victims who dared to preserve the memory of parents’ suffering.

That comment was so hurtful the ADL broke its unspoken rule against criticizing Democrats and actually bashed a liberal.

Later in March (the 20th), Clyburn made the Trump/Hitler analogy again:

Why does he insist on cheapening the memory of the suffering of 6 million Jews who suffered through the Holocaust, along with those who survived the Holocaust horrors and the Jews who mourn the victim’s pain every day? Perhaps it’s because of Clyburn’s friendship with Louis Farrakhan, in 2011 he wrote in the magazine of The Nation of Islam, called The Final Call, “I want to thank Min. Farrakhan for offering up several precepts that we ought to adhere to.” Based on his constant debasing of the Holocaust, perhaps we know which of Farrakhan’s precepts to which Clyburn is referring.

Here’s the bottom line.  Donald Trump never forced people to put tattoos on their arms, crowded them into death camps where they would suffer torture till they were gassed, shot, thrown in ice water, or died some other horrible death. After those horrific deaths, Trump never mutilated their corpses by taking out what can be reused like gold teeth and wooden legs and tossing what remains into a crematorium.

You see Rep.Clyburn until President Trump does something like the above, any comparison to Hitler and/or the Nazis is not only false and inappropriate,  but it cheapens the memory of the people who suffered during the Holocaust and causes more pain for those who try to honor their memories. There is no way Trump will let that happen against Jews, Gypsies, or any other race or gender, or ethnic group.

If President Trump had made the sane inappropriate reference as Clyburn spews regularly, the media would be all over him with criticism. But they are silent when Clyburn does it. Just another example of media bias.

Please Note: Other things that shouldn’t be used for comparison are horrors such as slavery in America and Apartheid in South Africa. In their own unique way, they are also incomparable to anything else.