James Clapper: If FBI Spied On Trump, It Was A ‘Good Thing’ For America 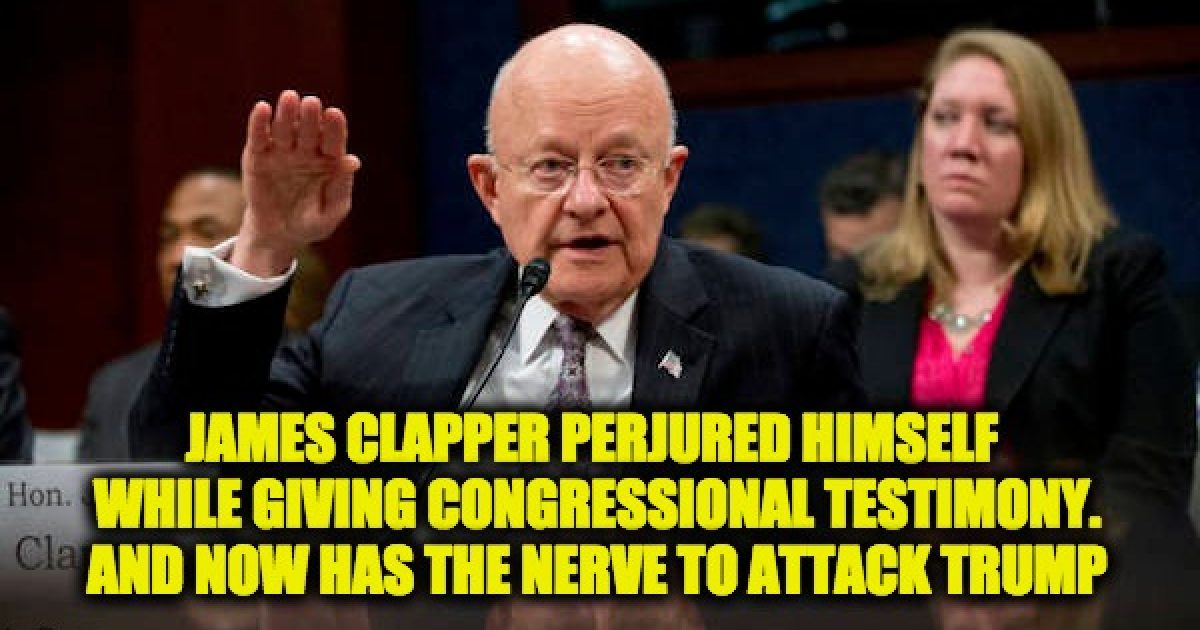 Friday was a long day with a lot of terrible news, and former Director of National Intelligence James Clapper added to it.

He was interviewed on CNN on Thursday night.  In the course of the interview, Don Lemon quoted from one of Trump’s latest tweets.

[CNN’s Don] Lemon stated, “Here’s what the president tweeted this morning. He said, ‘Wow, word seems to be coming out that the Obama FBI spied on the Trump campaign with an embedded informant. Andrew McCarthy says, ‘There’s probably no doubt that they had at least one confidential informant in the campaign.’ If so, this is bigger than Watergate!’”

Lemon continued, “That is an extraordinary claim, and based on your experience, what is the likelihood that it’s true?”

Clapper answered, “Well, I think this is hyperbole. They may have someone who was talking to them in the campaign, but the focus here, as it was with the intelligence community, is not on the campaign, per se, but what the Russians were doing to try to instantiate themselves in the campaign or to influence it or leverage it.”

Then Clapper made his outrageous statement: “So, if there was someone that was observing that sort of thing, that’s a good thing because the Russians pose a threat to the very basis of our political system.”

All right, so at least he didn’t say “kakistocracy.”

What saddens me is the deflection and faux moral posturing.  “Hyperbole”?  If the FBI had an informant in the Trump campaign, then it had one.  There’s no “hyperbole” involved in pointing that out.

Disputing whether the verb “to spy” applies, which seems to be what Clapper is getting at, is being disingenuous.  We’re not talking about 10-year-olds trying to peer into each other’s windows.  We’re talking about the FBI.  There’s no such thing as the FBI having informants monitoring your activities, and that not having weighty implications, about which there is no need to be “hyperbolic.”

But Clapper’s especially focused moral contradiction is the business of the Russians “posing a threat to the very basis of our political system.”

That has been the mantra of the Russiagate narrative, but no one ever defines it in a way that makes sense.  That’s pure demagoguery: an attempt to railroad people with trigger sentiments.  Sorry, I’m not selling America down the river for an emotional bumper sticker that has no meaning.

Here’s what has meaning.  The actual basis of our political system — which is about a government that is consensual, limited, constitutional, and federal — is the U.S. Constitution.  The Fourth Amendment to the Constitution says the government can’t spy on the people except with probable cause, which means having the “criminal predicate” for a law enforcement operation that the talking heads were alluding to on Thursday.

Clapper apparently wants to gloss over the bright, constitutional line between spying on Russians (green light) and spying on the American citizens in the Trump campaign (red light, and you don’t move a muscle until it changes after a judge agrees with your reasoning).

Anyone can babble vague, plausible-sounding nonsense about undermining confidence in our political system.  But the tangible, meaningful priority is whether our liberties and rights are being protected.  The most significant factor in that, by far?  Whether the leaders of government acknowledge themselves to be bound by constitutional limits and the rule of law.

Clapper whiffed at-bat on that, but he’s certainly not the only one.  The way of thinking he articulated Thursday night is a dead letter.  Too many of the people know the difference.  And that, at least, is some good news to balance the bad.