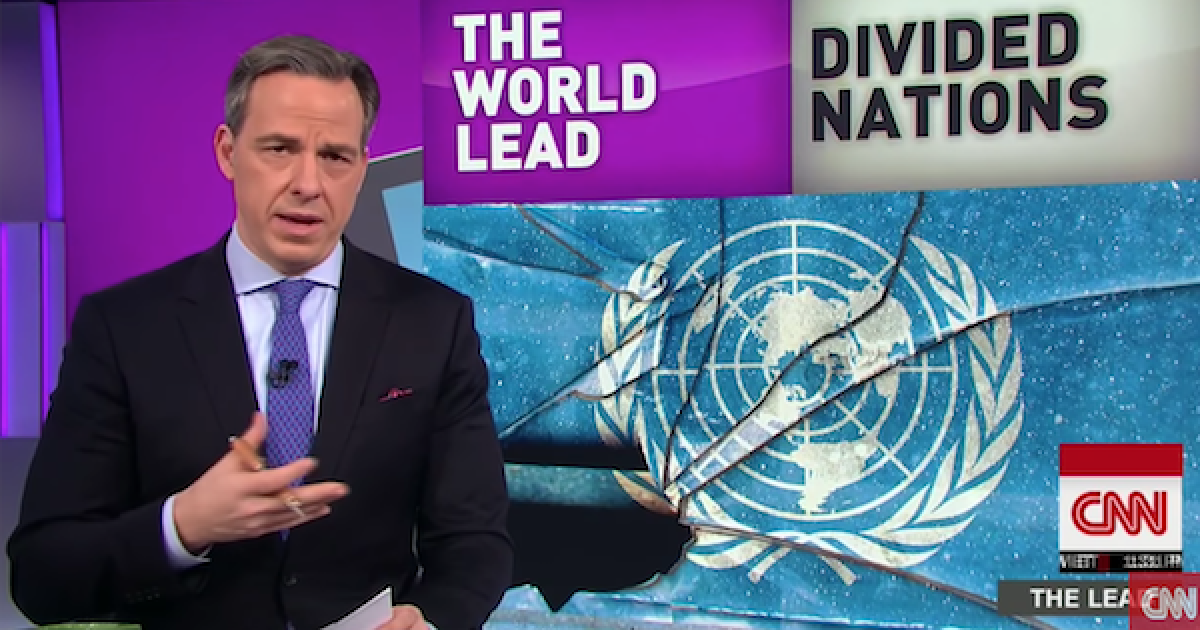 I am sure that many of my fellow conservative’s will give me much crap about this post but I happen to believe that Jake Tapper is one of the fairest reporters on TV. I don’t always agree with him,  and it is true that he’s been very hard on President Trump, but here’s the thing his conservative critics forget–he is just as hard on the Democrats.

Yesterday Tapper demonstrated again how he tells the truth as he pointed out the hypocrisy of  Thursday’s UN Vote condemning President Trump’s decision to move our capital to Jerusalem.

Jake Tapper: Remember yesterday how United States ambassador to the United Nations, Nikki Haley, said the U.S. would be taking names of countries that supported a resolution critical of the Trump administration’s decision to recognize Jerusalem as Israel’s capital? Well, let’s hope Haley brought a lot of pens and paper, because 128 countries voted against the United States today, many of them U.S. allies.

Only nine countries voted with the U.S. There were 35 abstentions. Among the 128 countries that voted to condemn the U.S. on this issue were some countries with rather questionable records of their own. Take Venezuela’s representative today.

Jake Tapper:  The U.S. imperils global peace says the representative of Venezuela, a country in a humanitarian disaster. With violence in the streets and economy in complete collapse, citizens malnourished, citizens malnourished, dying children being turned away from hospitals, starving families joining street gangs to scrounge for food. On what moral platform does the government of Venezuela stand today?

Not to be outdone, of course, the U.S. also got an earful today from, Syria. We’re in the seventh year of the brutal Syrian civil war that’s killed half a million people and displaced millions. Syrian President Bashar al Assad has used chemical weapons against his own citizens including children.

Also feeling a bit preachy today, Yemen, which helped draft the resolution condemning the U.S., seemingly more focused at least during the speech on where the U.S. puts it’s embassy on Israel than on the 7 million Yemenis on the brink of starvation in that country’s civil war.

(Video) Khaled Hussein Alyemany, U.N. Permanent Representative Of Yemen: In light of the circumstances that our region is experiencing and which constitutes a threat to international peace and security.

Jake Tapper: Yemen concerned with stability in the region, interesting.  There are plenty of policies and actions that are perfectly valid to criticize about the United States and about Israel and certainly, whether this move will help the peace process in any way seems one of them. But listening to these countries including North Korea and Myanmar and Turkey and China, lecturing the United States in any way about human rights and peace might seem a bit much.

But here is a bit of context that you might not know. According to U.N. watch which monitors the United Nations, the United Nations General Assembly from 2012 and 2015 has adopted 97 resolutions, specifically criticizing an individual country and of those 97, 83 of them have focused on Israel. That is 86 percent.

Now, certainly Israel is not above criticism, but considering the genocide of the Rohingya people in Myanmar, the lack of basic human rights in North Korea, the children starving in the streets of Venezuela, the citizens of Syria targeted for murder by their own leader using the most grotesque and painful of weapons, you have to ask, is Israel truly deserving of 86 percent of the world’s condemnation? Or possibly is something else afoot at the United Nations? Something that allows the representative of the Assad government to lecture the United States for moving its embassy?

Some would read the transcript above or view Jake Tapper’s 3-minute monolog on the video below, and come away thinking that the CNN Anchor supported the President’s move. If you did…you are wrong! Maybe he does or maybe he doesn’t but you cannot tell by what he said.  You see Tapper only pointed out the hypocrisy of the nations who supported the anti-US action. He gave an honest context to the news without offering his opinion.

Just like the example above, much of the criticism Jake Tapper gets from my fellow conservatives is really people’s own interpretation of the honest context he is providing.  Unlike some others, at CNN Jake Tapper is trying to be fair. Whether or not we agree with him (and I often don’t) is a totally different issue.