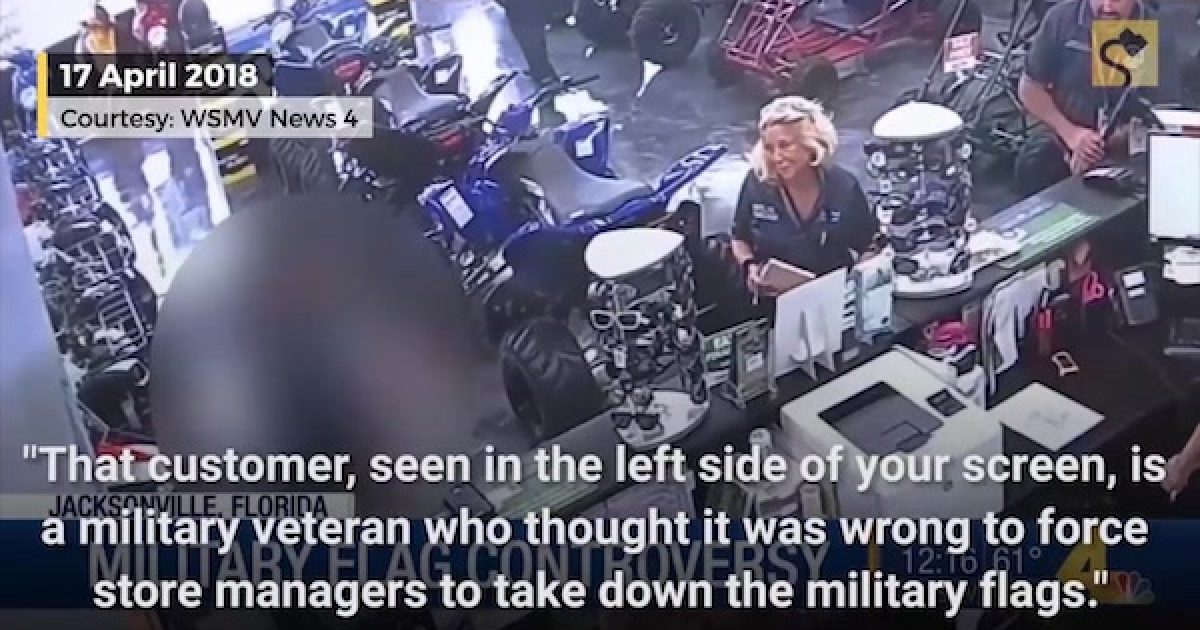 A firestorm has been brewing down in Jacksonville, Florida over the last day or two. At the center of the controversy is a power sports business called Jaguar Power Sports caters to military veterans, a city employee who has no respect for America’s heroes, and an outpouring of support from patriotic Americans.

Jaguar Power Sports, flies flags from each of the military branches, plus a pair of American flags and a Jacksonville Jaguars flag. According to city ordinances, the military flags were against code, which is what led city inspector Melinda Powers into their store on Monday.

Surveillance video captured city inspector Melinda Power getting in the face of the customer at Jaguar Power Sports on Blanding Boulevard.

Employees told News4Jax on Monday that she was so disruptive and disrespectful to the veteran, they asked her to leave.

About noon Monday, Power went into the store and issued a written warning citation because she said military flags flying on the roof were in violation of city code. The rooftop display includes two United States flags, a Jacksonville Jaguars flag and flags representing each branch of the military.

“We cater to our men and women, both retired and active military, so it was personal. We felt like it was a personal attack,” store manager Marcy Moyer said.

According to employees, the warning caused a customer to become upset. The customer seen in the video is a military veteran who thought it was wrong to force store managers to take down the military flags.

“The way she handled the situation was terrible,” Moyer said.

At one point, the video shows Power getting in the man’s face.

“She says, ‘What did you do for this country?’ He says, ‘I took three bullets to the leg. I almost lost my life for this country. I’m retired. I’m a veteran.’ She gets in his face this close and says, ‘You did nothing for this country,’” store employee Katie Klasse said.

Managers said despite the warning citation, the flags would not be going anywhere soon.

Here’s what the store owners had to say about what happened:

Almost immediately outcry from the community was heard by the Mayor’s office, and the local Republican leadership swung into action.

Mayor Lenny Curry (R) was unequivocal in his statement upon hearing what Jaguar Power Sports had been through:

1. I Have directed city staff that military flags should be treated same as US flag. Let them fly. I Have reached out to the business owner & will review employee procedures. COJ employees r expected to be respectful of our customers – you, the people of Jacksonville.

2. We support our military and veterans, and we appreciate businesses who honor their service.

The mayor’s chief of staff, Brian Hughes, also released a statement to local media, expressing the mayor’s disgust with the situation.

“We are disturbed by some of the claims made about a City employee and are reviewing the facts. We are also reviewing the current ordinances regarding flags and signs to ensure accurate information was shared. The business was issued a warning, and was not fined. Warnings are issued to provide property owners information about a possible violation, and corrective action.

“I have contacted the dealership and provided the owner with the mayor’s contact information for them to discuss directly. Mayor Curry and his administration respect and appreciate those in uniform who have served and continue to serve our community, and our country.”

Soon after the mayor’s office learned of what happened, Jaguar Power Sports got the good news they were hoping for and their citation was rescinded.

For her part, city inspector Melinda Powers said the entire situation was a catastrophic series of mistakes.

She says that the flags were against code, but that the conflict in the store was just a misunderstanding, and that she has the utmost respect for our nation’s veterans. Yeah Sure, and The Lid has a full head of hair.

The folks at Jaguar Power Sports want to thank everyone for their support: