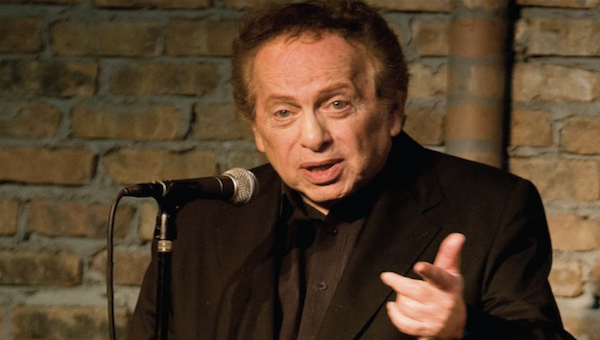 Comedian Jackie Mason passed away yesterday on July 24th. He made me laugh like no other comedian ever did, perhaps because he was a visible Jew, but unlike some other Jewish comedians, he never apologized for his Jewishness; he bragged about it.

Born Yacov Moshe Hakohen Maza, Mason came from a long line of rabbis that included his father, grandfather, great-grandfather, and great-great-grandfather. His three older brothers were also rabbis.  After being ordained as a rabbi, he led congregations in Pennsylvania and North Carolina but, after a few years, quit the rabbinate to answer his true calling, making people laugh.  But he never forgot his rabbinical learning, “Every time I see a contradiction or hypocrisy in somebody’s behavior,” he once quipped, “I think of the Talmud and build the joke from there.”

In the short time since his death was announced, celebrities and other notable figures mourned Mason’s death. Gilbert Gottfried called him “one of the best.  Sean Hannity remarked that he was “irreverent, iconoclastic, funny, smart and a great American patriot. His life was even celebrated by  “The Fonz.”

Truly one of the funniest shows I have ever seen .. ever .. thank you Jackie and now you get to make heaven laugh https://t.co/LV8bSZyFjG

Mason was also a political conservative who never gave in to the Hollywood liberals. But most of all, he was funny as all heck:

On “The Simpsons,” he played Krusty the Clown’s father, Rabbi Krutofski, and won Primetime Emmy Award in 1992 for Outstanding Voice-Over Performance for his performance as Hyman Krustofsky.

Jackie Mason also won a Tony for his first one-man show on Broadway, “The World According to Me!” No matter where he was: TV, Broadway, Radio, Movies, or the time I saw him walking in a park in Delray Beach, Florida, it didn’t matter. He made people laugh and enjoy themselves.

According to attorney Raoul Felder who was a long-time friend of Mason, the fact that he stopped and talked to me at a Delray park wasn’t an unusual occurrence.

We shall never see his like again. This was a mold that was broken,” an emotional Felder said. “We’re going to miss him.” “He spoke to everybody and listened to their troubles,” recalled Felder, who wrote a series of books with Mason. “He used to listen to all the waiters’ complaints.”

May God comfort Jackie Mason’s wife, daughter, and other mourners, and may his memory always be for a blessing (and a laugh).

Below is a long video of Jackie Mason’s humor, his award-winning show, “The World According to Me!”

Below is a long video of Jackie Mason’s humor, his award-winning show, “The World According to Me!” enjoy: