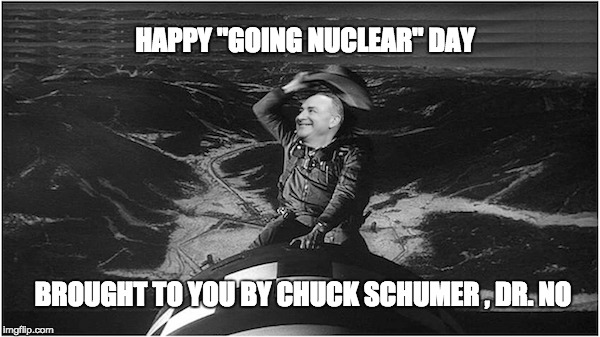 There ain’t nothin’ more powerful than the odor of mendacity! (Big Daddy in the Tennessee William’s “Cat on a Hot Tin Roof”)

On Friday, Washington D.C. will be filled with the aroma of the fallout from the use of the “nuclear option” being forced upon the Senate by Minority Leader Chuck Schumer. On Thursday the stench is much worse. The nation’s capital is filled with the odor of mendacity. Led by the NY Senator, Democrats who objected to filibustering judges in the past lined up to filibuster the most competent judge nominated to the Supreme Court in years, forcing the GOP to invoke the “nuclear option.”

The rationale for the Democrats trying to block the inevitable placement of Judge Gorsuch on the court is that Senator Schumer, also known as Dr. No, has been doing his best to obstruct everyone President Trump has nominated. Schumer caused delays in the voting to approve cabinet members who were going to be approved anyway. And now with the filibuster he is fighting the appointment of Trump’s first Supreme Court nomination. Dr. No understands that Gorsuch will eventually be approved, that is not the issue. The issue is that the very leftist wing of the Democratic Party, still mourning the loss of Hillary Clinton, wants Schumer to fight every single item that the new president proposes.

In supporting the filibuster, many of these mendacious Democrats are not only ignoring the qualifications of Gorsuch (endorsed by the American Bar Association, Barack Obama’s solicitor general, and even Judge Merrick Garland whose selection by Obama was ignored by the Senate because of the “Biden Rule” thought Gorsuch was a good pick), but they are also ignoring their own words.

The filibuster of Judge Gorsuch is even more absurd when one realizes that Judge Bork, a brilliant jurist who was unfairly slandered by Ted Kennedy as a hater of all things American, received an up or down vote. So did Clarence Thomas who was accused by the Democrats of being a sexual predator (obviously he was confirmed) because he was both African-American and conservative. But Judge Gorsuch whose only crime was that the president who appointed him beat Hillary Clinton in the election, gets filibustered.

In the end, when it comes to Supreme Court Justice votes in the future, today’s vote and the resulting nuclear option will have little effect. There was NEVER a 60 vote threshold for nominating Supreme Court justices, and Judge Gorsuch will be a supreme court justice by the weekend.

The real result of the Democrat filibuster is the continued disintegration of the congress into a partisan political street fight, first begun on January 23, 2009 when House minority leader Eric Cantor visited the White House on the 1st weekend of Barak Obama’s presidency. When Cantor offered some suggestions for the upcoming stimulus bill, the new president told him the ideas were not welcome because,“Elections have consequences, and at the end of the day, I won.”

President Trump has tried to bring the parties together, meets with people of all sides, and seems willing to make compromises. Despite this, NY Senator Chuck Schumer retains the role of Dr. No and objects to anything President Trump proposes. Until Schumer becomes a legislator rather than a roadblock, America will suffer from a dysfunctional legislature, perhaps even leading the GOP-led senate to eliminate the only remaining filibuster for legislation. When this happens it will be the result of the near-automatic filibuster of judges appointed by a POTUS of the opposing party which was invented by Chuck Schumer in the first year of the Bush #41 administration. In November of 2003 the NY Times explained:

Gridlock, thy name is Chuck Schumer.