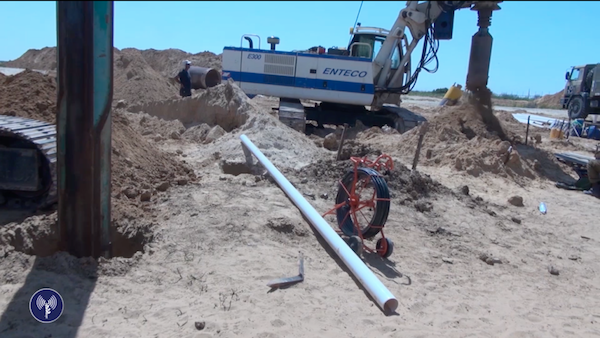 Israel’s Gaza wall is going underground. There is already a barrier along its border with Hamas controlled Gaza, now they are expanding their protection with an underground wall to prevent terrorist incursions via tunnels Hamas builds under the border. Before and during the last war between Israel and Hamas, the terrorist fighters used tunnels to attack civilians and blindside IDF troops.

The underground barrier was announced three years ago but now the IDF says it will accelerate the construction of the underground wall and it will be done within two years:

The Israeli army will spend $800 million on building a massive underground barrier along its border with Gaza. The wall will stretch along the entire 40-mile frontier and will be 40m deep.

Much will be concrete, latticed with iron bars and pipes laden with sensors. The army also plans to build a 6m-high steel barrier above it to prevent Gazans from crossing into Israel.

The army expects to have workers building the wall around the clock by October, though it will probably take years to complete. It has already set up concrete factories along the border.

(…) The barrier will also extend into the Mediterranean, to prevent Hamas frogmen from swimming ashore. “I think the other side will have to re-evaluate the situation in view of the barrier,” said General Eyal Zamir, the Israeli head of the southern command.

The wall will be set back a few meters from the border which among other things will prevent some of the criticism bout to come from the Democrats in the U.S., and countries with policies unfavorable toward Israel.

Hamas announced that the building of the underground barrier was a act of war. About which General Zamir told CNN “I think the other side will have to reevaluate the situation in view of the barrier’s construction….If Hamas chooses to go to war over the barrier, it will be worthy reason to go to war over — but the barrier will be built.”

Israeli military officials also distributed aerial photographs and GPS coordinates of two residential buildings in Gaza that they say hides entrances to Hamas tunnel networks. General Zamir said that in wartime the buildings would be legitimate targets. One of the two is home to a Hamas member with five children, connecting to a nearby mosque, according to the IDF. These are said to be two in “bank of targets.”

“Our intelligence shows without any doubt that Hamas is building its infrastructure for the next round of fighting in the civilian arena,” Zamir added.

Zamir explained that  Hamas purposefully builds the tunnels under civilian structures to provide human shields for its operations. That being the case, the general warned, “these sites are legitimate military targets. Anyone inside of one, should another conflict begin, endangers himself and endangers his family, and the responsibility is on the Hamas organization.”

A video report about the wall construction is below: