Who's Afraid Of Dementia Joe? 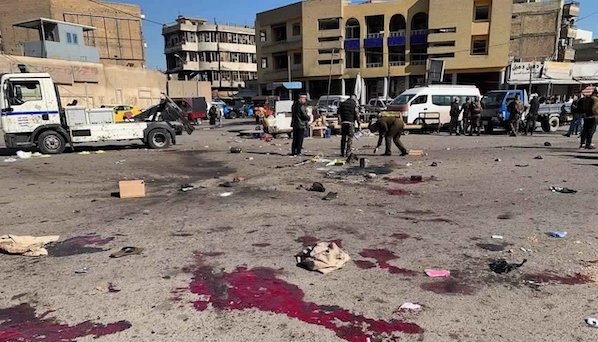 On Joe Biden’s first full day as POTUS, ISIS launched its first major attack in Iraq in three years. The terrorist group took credit for a double suicide bombing in the Iraqi capital, Baghdad, on Thursday morning that killed at least 32 people and wounded more than 100.  ISIS welcomes Biden.

Trump, for whatever people may think of him, made it a top priority to ‘bomb the hell out of ISIS’. They were effectively wiped off the map. Scratch that. They were literally wiped off the map. That is to say, there was a de facto country controlled by ISIS when Trump took office (one that only sprang into existence during that steady hand of Obama/Biden leadership), and before long, he had kept the promise and the so-called ‘Caliphate’ was wiped off the map.

Joe Biden was the one guy in the room who opposed the killing of Osama Bin Laden on the day he was dispatched to hell, and he told us that doing the same with Solemani. Sleepy Joe was more interested in casting doubts on Trump’s decision than he was even in showing approval for the death of the guy PERSONALLY and DIRECTLY responsible for the deaths and maimings of so many American soldiers, particularly those ripped apart by what Solemani gifted to the Islamist terrorists— vehicle-destroying IEDs.

He’s shown himself to be weak on terror. And who’s his pick for head of state? This guy:

No, what made the U.S. less safe was the leaning tower of Jell-O also known as President Biden who was described by the Obama-Biden Defense Secretary Robert Gates as being “wrong on nearly every major foreign policy and national security issue over the past four decades.”

Now it could just be a coincidence that ISIS decided to pick Joe Biden’s first full day in office to blow up not one, but two suicide bombers in Iraq –if one believes in coincidences.

This video shows the moment the second bomb went off in a local market in Iraq's Baghdad. The death toll has risen to at least 28 pic.twitter.com/9teCUwqDz2

Those who believe this was a coincidence probably also believe in the tooth fairy, monsters under their beds, and Hillary Clinton’s innocence in the Clinton Foundation-State Dept. pay for play scandals.

ISIS has a long track record of showing just as much attention to the propaganda value of an attack as to the attack itself. Are they sending a message? If so, what message? And why did they wait until the first day of Biden’s Re-Bama Presidency to do it? Because they were afraid to do it while Donald Trump was still President.

Could it be that Obama’s old ‘Jayvee team’ hasn’t forgotten the tepid response of the LAST Democrat administration? Do they think they’re going to get a free pass? Does Biden even know HOW to give a strong answer that’s more than just boilerplate DC bluster? Because the last 8 years Joe spent in the White House should underscore just HOW ineffective that particular approach IS with terrorists such as ISIS.

Is he going to take them out?

Or Lead From Behind?

Now that the decisions actually mean something it’s time to see whether he’s capable of making any tough decisions. I am not very confident that he can show strength without getting our troops unnecessarily involved in an overseas war—which would be another reversal of a Trump success.