Is Fauci Trying For A New Pandemic? 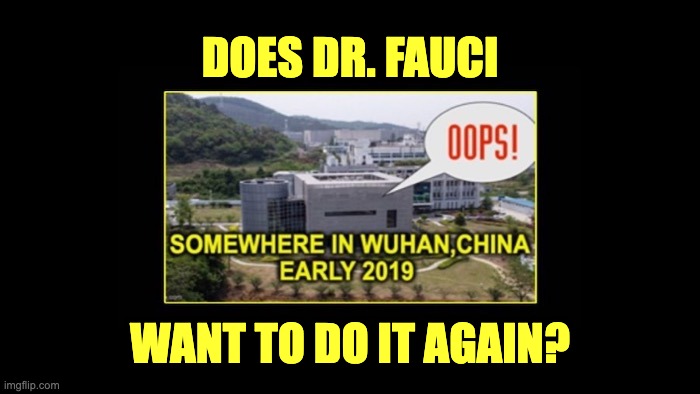 Just a year ago, the National Institutes of Health (NIH) admitted to funding gain-of-function research on bat coronaviruses by the Wuhan lab in China. The U.S. partially funded this research. But the contract for that grant stipulated that the funding could not be used for gain-of-function experiments—they either missed or ignored that part.

Many believe that a leak from coronavirus bat research caused the COVID pandemic that killed millions of people worldwide. Dr. Anthony Fauci, director of the National Institute of Allergy and Infectious Diseases (a division of the NIH), authorized the payment to the Wuhan lab.

In other words, the MSM’s “holy” doctor moved the goalposts to meet his needs.

The $653,392 grant to EcoHealth was made through the National Institute of Allergy and Infectious Diseases (NIAID), which is run by Fauci. It covers a period until Aug. 31, 2027, for a project titled “Analyzing the potential for future bat coronavirus emergence in Myanmar, Laos and Vietnam.”

“In 2021, Dr. Fauci said, almost prophetically, he worried about ‘unregulated’ laboratories, perhaps outside of the United States, doing work ‘sloppily’ and leading to an inadvertent pandemic… Clearly the U.S. government and Dr. Fauci knew that viral GoF was concerning… But while Fauci encouraged U.S. scientists to pause their GoF studies, Fauci offshored the paused research to China. In 2012, Fauci gave a new grant to Peter Daszak’s EcoHealth Alliance for influenza research in China. In 2014, Fauci gave another new grant to Daszak for SARS research in China. Daszak partnered with who? The Wuhan Institute of Virology (WIV)… This is a bipartisan, national security issue and together we must immediately pause all viral gain-of-function research…”

On the House side, Reps Steve Scalise, R-LA., James Comer, R-KY,  and Jim Jordan, R-OH, sent an angry letter to Fauci, who will leave the office at the end of the year. The letter said in part:

“[Y]your decision to continue the flow of grant funding to EcoHealth is, at best, a gross mismanagement of taxpayer dollars,” the Republicans wrote.

“It is outrageous that the results of U.S. taxpayer-funded experiments are unavailable to the U.S. government, particularly when those experiments could shed light on the origins of a virus that has killed more than one million Americans,” they added. “It is unconscionable that you would choose to continue to fund a company that has violated its NIH grant terms in a manner that helps to keep this valuable information from the U.S. government and American taxpayers.”

Fauci lied about the origins of COVID and what is gain of function. Eco-Heath/Wuhan Lab broke the agreement not to use U.S money for gain of function research, and they never gave congress the report they were supposed to provide. So please tell me again, why is  Congress allowing Fauci to give them more money?