When The IRS Targeted Jewish Activists 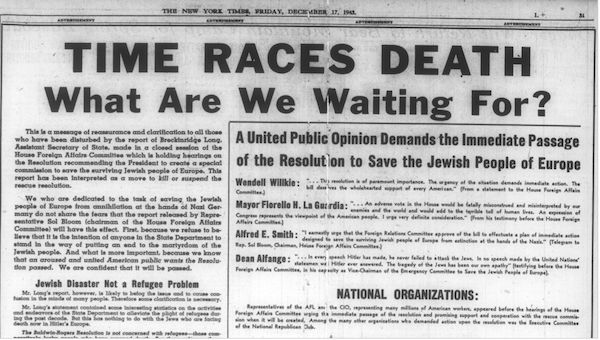 In a successful lawsuit, it was proven that the Internal Revenue Service under Barack Obama discriminated against Z-Street, a Zionist organization that disagreed with the President’s views regarding Israel. For the American Jewish community, it’s a reminder of a disturbing episode that took place during the Holocaust era.

The Jewish target of U.S. government wrath in the 1940s was the Bergson Group, a political action committee led by Peter Bergson (Hillel Kook), a Zionist emissary from Palestine. The group used newspaper advertisements, rallies, and lobbying to press the Roosevelt administration to rescue Jews from the Nazis.

To put it mildly, President Franklin D. Roosevelt was unhappy about those protests. One senior White House aide reported that FDR was “much displeased” when the Bergson Group brought 400 rabbis to Washington to plead for rescue. First Lady Eleanor Roosevelt told Bergson himself that the President was “very upset” about one of the group’s newspaper ads, which FDR felt was “hitting below the belt” because it accused him of turning a blind eye to the Nazi massacres.

The State Department, too, was annoyed by Bergson’s campaign for rescue. Assistant Secretary of State Breckinridge Long privately complained that the group’s newspaper ads “made it very difficult for the Department.” Long’s deputy, Robert Alexander, absurdly claimed that the slogan used in one Bergson ad, “Action–Not Pity,” had actually been invented by the Nazis as part of a conspiracy to embarrass the Allies.

Beginning in 1942, the Roosevelt administration sent the Federal Bureau of Investigation and the Internal Revenue Service after Bergson. They were looking for evidence of criminal activity, but their motivation was political. An internal FBI memo I obtained under the Freedom of Information Act bluntly explained why U.S. government action against Bergson: “This man has been in the hair of [Secretary of State] Cordell Hull.”

FBI agents gathered background information from what they called “persons in New York City who are familiar with Israelite matters.” They also eavesdropped on the Bergsonites’ telephone conversations, opened their mail, went through their trash, and planted informants in the group to steal documents from Bergson’s office. The FBI hoped to find proof the Bergson Group was secretly assisting the Irgun Zvai Leumi, the underground militia in Palestine that was headed by Menachem Begin. They found no such evidence.

The authorities’ second goal was to find a link between Bergson and the Communist Party. One FBI memo approvingly quoted a rival Jewish organization’s description of the Bergsonites as “a group of thoroughly disreputable Communist Zionists.” In a private letter, FBI director J. Edgar Hoover referred to the playwright Ben Hecht and six other leading Bergson activists as “fellow travelers.” But the FBI’s spying on Bergson did not turn up any evidence of a Communist link.

At the same time, the IRS launched a full-scale inquiry into the Bergson Group’s finances, seeking to revoke its tax-exempt status. For nearly a year, IRS agents repeatedly visited the group’s New York City headquarters, once for a stretch where they stayed from morning until night for more than two weeks.

Louis and Jack Yampolsky, a father-and-son accounting team that handled Bergson’s finances pro bono, had to dig out and reconcile every piece of financial information in the group’s records. “There were no photocopy machines in those days, so we had to hand-copy every disbursement and every receipt that was given for every donation,” Jack Yampolsky told me in an interview some years ago. “And because the Bergson Group had enormous grassroots appeal, it received literally thousands of one-dollar or two-dollar donations from people all over the country.

In the end, the IRS investigators could not find evidence of any wrongdoing. In fact, as the IRS team became familiar with the group’s work, they sympathized with it, and “when they finished, [they] made a contribution between them–every one of them gave a few dollars,” Bergson later told Prof. David S. Wyman.

The sympathy expressed by the IRS agents contrasted sharply with the sentiments expressed in some of the FBI documents I obtained. One FBI report about Bergson activist Maurice Rosenblatt derisively referred to the leftwing Coordinating Committee for Democratic Action, in which Rosenblatt was active, as “this Semitic Committee.” The FBI memo complained that Rosenblatt and his colleagues were trying to “smear” Nazi sympathizers in New York City.

“When there is a genuine threat, governments sometimes have to do things like eavesdrop,” Jack Yampolsky conceded. “But in our case, they were doing it for political reasons, and antisemitism also played a role. The fact that we vocally disagreed with U.S. government policy regarding the Holocaust and Jewish statehood was not a valid reason for the Roosevelt administration to enlist the FBI and the IRS in a war against the Bergson group.”

Dr. Medoff is the founding director of The David S. Wyman Institute for Holocaust Studies and the author of more than 20 books about Jewish history and the Holocaust. His most recent book, America and the Holocaust: A Documentary History, was published by the Jewish Publication Society of America. And available on Amazon (as are his other books).