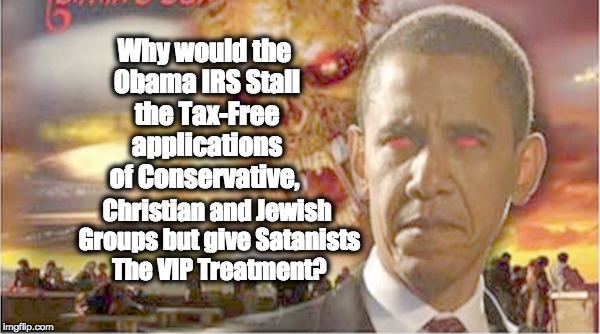 While the IRS was busy stalling tax-exempt applications from conservative, Christian, Tea Party and Pro-Israel Jewish organizations, they had no problem approving and even rushing applications for satanist groups.

It took a grand total of ten (10) days for the IRS to approve the tax-exempt status of the After School Satan Club back in 2014, newly released documents show.

Secular groups – including ‘satanist’ organizations – routinely complain of anything that smacks of Christianity in public schools. Since public schools are government-owned and operated, there can’t be any semblance of religion in and around them, according to angry atheists, because of the ‘separation of church and state.’ This includes nativity scenes, Bible verse displays, Ten Commandments, prayers, and any student group that distributes Bibles or other Christian literature.

Atheist organizations respond to these ‘incidents’ of religion by saying that if the authorities won’t do anything to stop them, then atheists and satanists should be afforded the same rights. It’s one of the few scenarios where atheists acknowledge being religious.

The IRS seems to prefer the satanist organizations to the Christian ones.

Documents obtained by Judicial Watch show the Internal Revenue Service (IRS) fast-tracked tax-exempt status for an “After School Satan Club” in Tacoma, Washington, while the federal agency was discovered to be either denying conservative and Christian groups the same status or making them wait for years.

According to the watchdog group that uncovered the IRS scandal during the Obama administration, the After School Satan Club at Point Defiance Elementary in Tacoma applied for its tax-exempt status designation on October 21, 2014 and received it only 10 days later on October 31, 2014.

Breitbart News reported in October of 2016 the announcement by the Satanic Temple of Seattle for its proposal of the After School Satan Club in the Point Defiance Elementary school.

“After School Satan Clubs will focus on free inquiry, rationalism, science, and character building,” the temple’s website says, and continues:

All After School Satan Clubs are based upon a uniform syllabus that emphasizes a scientific, rationalist, non-superstitious world view.

While the twisted Evangelical teachings of The Good News Clubs “robs children of the innocence and enjoyment of childhood, replacing them with a negative self image, preoccupation with sin, fear of Hell, and aversion to critical thinking,” After School Satan Clubs incorporate games, projects, and thinking exercises that help children understand how we know what we know about our world and our universe.

Judicial Watch reports Reason Alliance, based in Somerville, Massachusetts, operates as the Satanic Temple of Seattle with Lilith X. Starr as the director.

The group’s documents show the parent permission form used for children to join the club “asks for the name of the child’s church and pastor.” Records also indicate that Starr told Carla Santorno, superintendent of the Tacoma school district, that After School Satan Clubs are led by “caring Satanists.”

Jeff note:It is so typical of anything connected to the Obama administration, the IRS hurt Conservative, Tea Party, Pro-Life, Pro-Israel and other groups with political objectives the President didn’t like…But an after-school devil worshiping program, that gets the VIP treatment.