What The Heck Is Iran Up To? 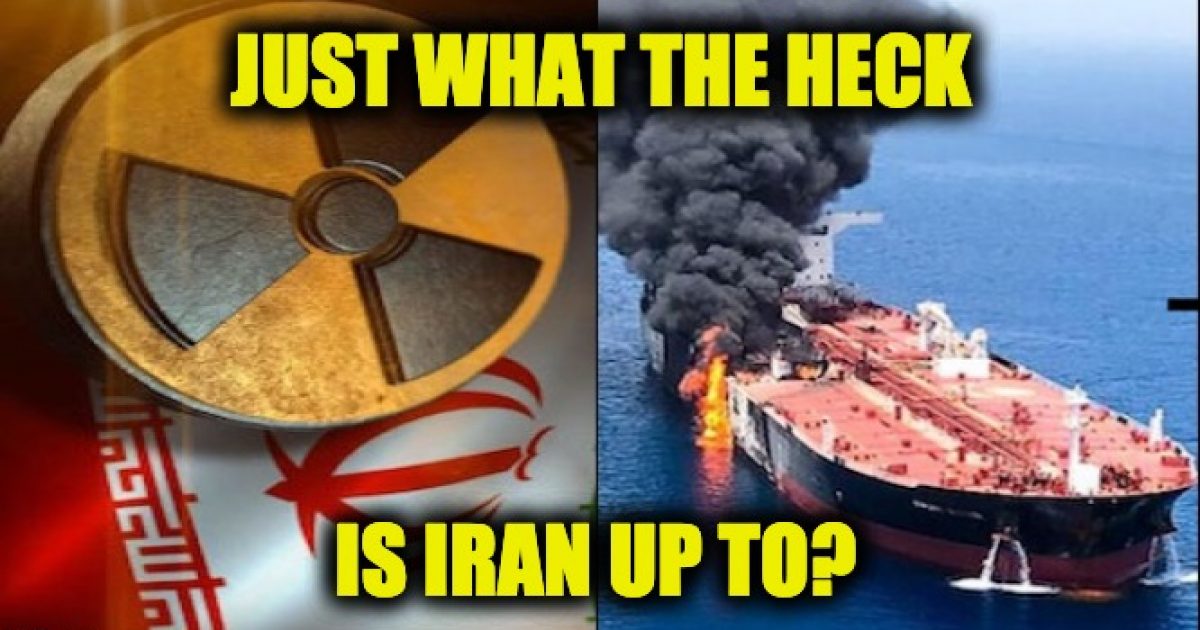 The rogue Iranian regime is continuing its spring offensive trying to drive a wedge between the United States and its European allies.  Early Monday morning, Behrouz Kamalvandi, spokesperson for the country’s atomic agency, announced Iran plans to break the uranium stockpile limit set by the JCPOA nuclear deal within the next 10 days. He made the announcement from Iran’s Arak heavy water plant.

“Today the countdown to pass the 300 kilograms reserve of enriched uranium has started and in 10 days’ time, we will pass this limit (June 27)…This is based on the Articles 26 and 36 of the (nuclear deal), and will be reversed once other parties live up to their commitments.”

Article 26 of the JCPOA says there will be no re-imposition of sanctions by the EU or the United States. Article 36 explains how a country can get out of parts of the agreement.

President Trump pulled out of the agreement in 2018. The countries staying in the agreement are China, France, Germany, Russia, and the United Kingdom.

Kamalvandi also warned that Iran could enrich uranium up to 20 percent, but if the countries remaining in the JCPOA convince the US to pull back the sanctions imposed since pulling out of the deal, they will start following the JCPOA guidelines again.

Although not weapons-grade, 20 percent purity is generally considered “highly enriched” uranium. 90% is considered weapons grade, but it’s easier to go from 20% to 90%, than 0-20%. Therefore this announcement moves Iran closer to nuclear weapons.

While treated as a surprise in the MSM, this move has been signaled since April. Last month, Iran scaled back some commitments under the deal and warned that in 60 days it would resume refining uranium to a higher degree if Europe failed to shield its trade from US sanctions. President Hassan Rouhani announced that Iran would stop observing restrictions on its stocks of enriched uranium and heavy water agreed under the nuclear deal.

In an interview translated by MEMRI, Last week Senior Iranian Official Mohammad-Javad Larijani, the Head of the Institute for Research and Fundamental Sciences, said on Iranian TV that the IAEA observers and inspectors, which he described as “cockroaches,” should not be allowed into Iran or its scientific facilities, and that Iran is under no obligation to provide them with information. He stressed that Iran is not actually committed to the JCPOA or the NPT because the other signatories are doing whatever they want, and he said that Iran should suspend and renegotiate its membership in the NPT. Larijani added that Iran has the right to engage in all types of nuclear research, including laser enrichment. He also said that Iran is not limited by the level of its uranium enrichment and that in some cases, it needs uranium enriched to 90%.

Actually, Iran never signed the agreement, neither did the US. A November 2015 letter from the State Dept, to then-Congressman Mike Pompeo said as much. The letter said in part:

The Joint Comprehensive Plan of Action (JCPOA) is not a treaty or an executive agreement, and is not a signed document. The JCPOA reflects political commitments between Iran, the P5+1 (the United States, the United Kingdom, France, Germany, Russia, China), and the European Union. As you know, the United States has a long-standing practice of addressing sensitive problems in negotiations that culminate in political commitments.

The success of the JCPOA will depend not on whether it is legally binding or signed, but rather on the extensive verification measures we have put in place, as well as Iran’s understanding that we have the capacity to re-impose — and ramp up — our sanctions if Iran does not meet its commitments.

Verification?? A secret side deal revealed by the Associated Press long before the deal was agreed to, Iran gets to self-inspect the Parchin military base with no IAEA inspectors present. All other military base inspections are allowed under the JCPOA. But, Iran has stated more than once they will not allow inspections of military sites, which has restricted the IAEA from completing its inspection tasks because they haven’t pushed the matter.

There is evidence that Iran had already broken other provisions in the agreement. New satellite images of Iran’s Fordo Nuclear Facility released in 2018 show Iran has reopened up the gates and added new construction to its nuclear weapons plant. Fordo is dug deep into a mountain and thought to be resistant to air strikes. There is no reason to expand the site unless Iran had a bomb-making program.

Released on May 31, 2019, was the International Atomic Energy Agency’s (IAEA) latest safeguards report on the verification and monitoring of the JCPOA, officially called “Verification and monitoring in the Islamic Republic of Iran in light of United Nations Security Council resolution 2231 (2015).” The report discusses one potential violation of the JCPOA. As explained by the Institute for Science and International Security, the breach was mentioned in footnote 27. The footnote states, “up to 33 IR-6 centrifuges have been installed, of which up to 10 have been tested with UF6 (uranium hexafluoride. Which is a chemical form of uranium that is used during the uranium enrichment process) This number of deployed centrifuges is far in excess of what is a reasonable interpretation of the deployment rate implied in Iran’s long-term enrichment plan.”

These threats of increased uranium are just the latest actions to ramp up tensions made by the rogue regime:

Per remarks by the secretary of state Pompeo on June 13th:

This is only the latest in a series of attacks instigated by the Islamic Republic of Iran and its surrogates against American and allied interests, and they should be understood in the context of 40 years of unprovoked aggression against freedom-loving nations.

On April 22nd, Iran promised the world that it would interrupt the flow of oil through the Strait of Hormuz. It is now working to execute on that promise. In early May, the Revolutionary Guard Corps attempted the covert deployment of modified dhows capable of launching missiles.

On May 12th, Iran attacked four commercial ships near the Strait of Hormuz.

On May 19th, a rocket landed near the U.S. Embassy in Baghdad.

Later, on the 12th the Iran-backed Houthi Rebels fired and took down an American Drone, and on June 13th Iran attacked two Japanese oil tankers just outside Iranian waters.

The reasons for Iran’s actions is to “tweak the nose” of the United States and to drive a wedge between the US and Europe as some will use the cancelation of the deal and sanctions by America to justify the Iranian actions since April. Trump had to pull out of the JCPOA, it didn’t restrict Iran only the United States and the other countries in on the agreement. The deal didn’t prevent Iran from building nuclear weapons, it only paused parts of their program for a decade. Additionally, the JCPOA allowed Iran to continue funding terrorism via groups like Hezbollah and the Houthis, despotic governments killing their own people such as Syria, and keep their reign of terror against the Iranian people.

While some scaremongers believe that Iran and the US are heading toward war, that’s not in the cards.  Iran is crazy, but they know if they get into a war into the US, it will be the end of their regime. Besides, as explained above, it is not their objective.

The President doesn’t want to get into war with Iran or anyone else —he campaigned against rushing into wars,  but that doesn’t mean he will cut off America’s most significant advantage by taking a military option off the table.

China gets over eighty percent of its crude oil transiting through the Strait of Hormuz. South Korea, Japan, these nations are incredibly dependent on these resources. We’re prepared to do our part. We always defend freedom of navigation. We are going to work to build out a set of countries that have deep vested interest in keeping that strait open to help us do that. President Trump has said very clearly, he doesn’t want to go to war. At the same time, we’ve made very clear that (…)  We– we always have the authorization to defend American interests. Remember, they now have attacked U.S. aircraft. They– on June sixth there was a missile fired from Yemen with– that we assessed had Iranian assistance that took down an MQ-9 aircraft [drone]. These are attacks on fundamental, international norms, and now on American interests, and we always have the right to defend our country.

Pulling out of the flawed JCPOA Iran deal was an excellent foreign policy move by the President. As explained many times in this space when President Obama and Secretary of State Kerry tried to sell American citizens on the deal, they were not honest about many of its provisions.

The JCPOA deal tied the hands of the United States more than it tied the hands of Iran. When specific provisions of the agreement expire six years from today, in 2025 Iran will be free to produce nuclear weapons, and by all indications, they will need only a few months to make the jump. The latest news announced by Behrouz Kamalvandi will shorten the period required to make that jump.

By re-imposing the sanctions, President Trump has squeezed the regime’s wealth and prevented war.  If they want to spend money on Islamist terror groups such as Hezbollah, and despotic regimes like Syria, they won’t have the funds needed to stabilize their economy.  The sanctions have given Iran a choice, give up on building atomic weapons and funding terror,  or have a viable economy.