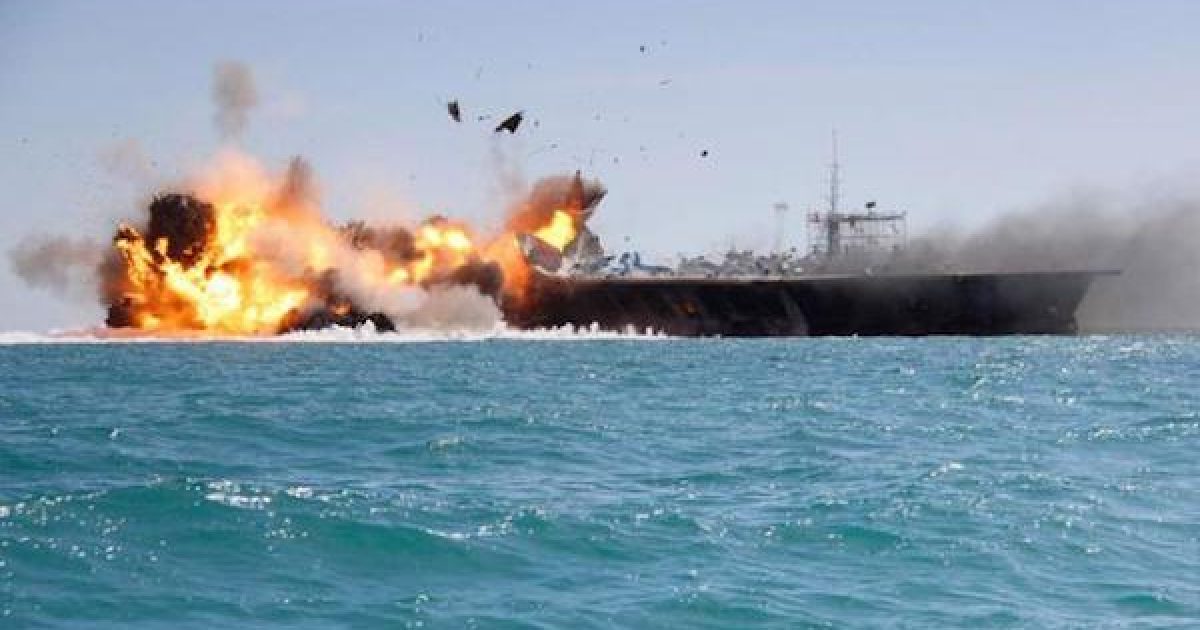 The exchange of words between the Trump administration and senior leaders in Iran got a lot of press this week.  On Sunday, Iranian President Rouhani warned America against courting the “mother of all wars,” his characterization of what war with Iran would be.  In a speech to a gathering of Iranian diplomats, Rouhani reiterated a previous oblique implication that Iran would prevent all oil exports from the Persian Gulf if the U.S. tried to block Iranian exports.

A senior military officer made the threat more explicitly:

“The Strait of Hormuz region must either be safe for all or be insecure for everyone,” said General Kioumars Heydari, quoted by Tasnim.

To Iranian President Rouhani: NEVER, EVER THREATEN THE UNITED STATES AGAIN OR YOU WILL SUFFER CONSEQUENCES THE LIKES OF WHICH FEW THROUGHOUT HISTORY HAVE EVER SUFFERED BEFORE. WE ARE NO LONGER A COUNTRY THAT WILL STAND FOR YOUR DEMENTED WORDS OF VIOLENCE & DEATH. BE CAUTIOUS!

The White House just issued this statement from John Bolton. “I spoke to the President over the last several days, and President Trump told me that if Iran does anything at all to the negative, they will pay a price like few countries have ever paid before.”

COLOR US UNIMPRESSED: The world heard even harsher bluster a few months ago. And Iranians have heard them —albeit more civilized ones—for 40 yrs. We’ve been around for millennia & seen fall of empires, incl our own, which lasted more than the life of some countries. BE CAUTIOUS!

(Somehow, with all this going on, Twitter is managing to lose users and market capitalization.)

Maj Gen Soleimani – who leads the Quds Force of Iran’s elite Revolutionary Guards – was quoted on Thursday as saying:

As a soldier, it is my duty to respond to your threats.

Talk to me, not to the president [Hassan Rouhani]. It is not in our president’s dignity to respond to you.

We are near you, where you can’t even imagine. Come. We are ready.

If you begin the war, we will end the war. You know that this war will destroy all that you possess.

All of this, we have heard plenty about in the mainstream media news.

Much less widely reported has been an apparent salvo of threats, actual and carried out, by Iran-backed Houthi rebels in Yemen – against regional commerce.

As it stands at the moment, it is still possible to characterize the damage done to a Saudi oil tanker in the Red Sea by a Houthi missile as a continuation of the occasional Houthi attacks on Saudi coalition vessels that started in late 2016.  That may be a reason why the latest attack, which occurred on Wednesday 25 July, has gotten little coverage in Western media.

But the sequence of events on Wednesday and Thursday suggests it’s more than that.  The morning of 25 July, Houthi sources reportedly took credit for targeting a Saudi vessel in the Red Sea. Regional reporting suggested their intended target was Saudi frigate Al-Dammam (F-816).

Within a few hours, reports circulated that it was actually an oil tanker that was hit.

About 14 hours after the initial report, senior Houthi leader Mohammad Ali al-Houthi was quoted as warning, “Our rockets can reach ports of the countries participating in the aggression

A few hours later – at this point, early on Thursday morning in the Persian Gulf – Iranian news outlet Kayhan, aligned with Ayatollah Khamenei, took up the Houthi threat, with an amplifying passage:

The Kayhan newspaper, close to Khamenei in a big headline is threatening Arab Gulf states: ” Spokesman of Ansarullah[Houthis] addressing the international companies: the missiles are on the way, evacuate Dubai, Abu Dhabi, and Riyadh.” pic.twitter.com/WyNbbqFb6E

Spokesman of Ansarullah[Houthis] addressing the international companies: the missiles are on the way, evacuate Dubai, Abu Dhabi, and Riyadh. 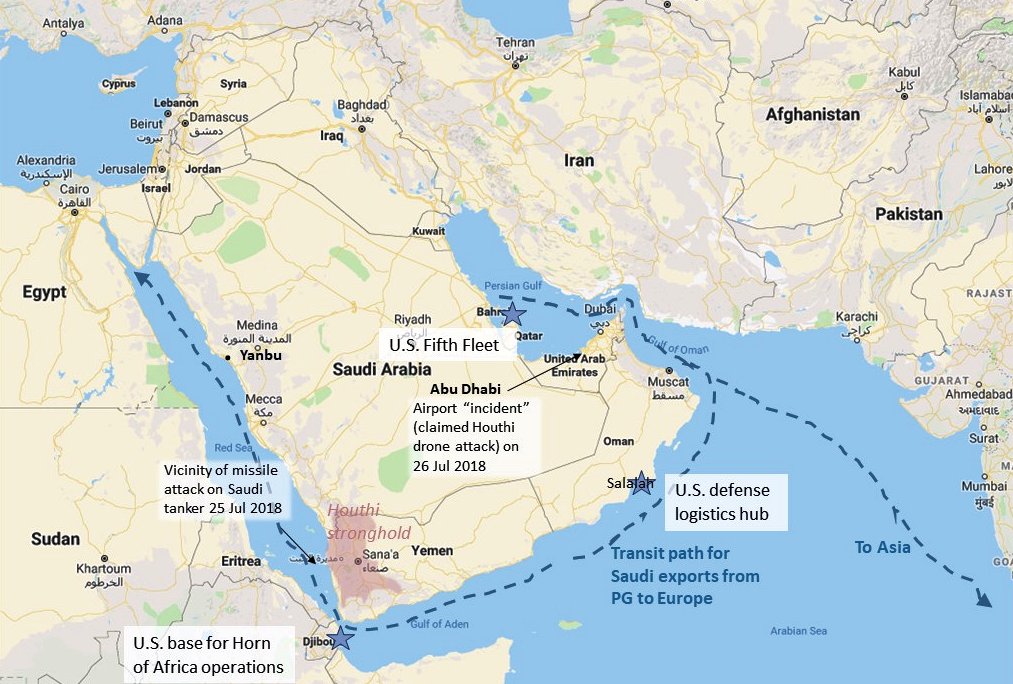 In the middle of this series of events, on Thursday, Qassem Soleimani’s belligerent comments were publicized in Tasnim. Don’t miss the significance of that. (More below.)

Also on Thursday, a Houthi claim was aired on a TV station in Yemen: that the Houthis had targeted the international airport in Abu Dhabi, UAE, using a drone. The UAE denied that such an attack had taken place.

But the airport authority did come out and announce that there had been an “incident involving a supply vehicle” at the airport Thursday afternoon.

Abu Dhabi Airports can confirm that there has been an incident involving a supply vehicle in Terminal 1 airside area of the airport at approximately 4:00 pm today.This incident has not affected operations at AUH and flights continue to arrive and depart as scheduled. (1/2)

Abu Dhabi Airports will continue to monitor the situation with the concerned authorities and further updates will be made available in due course. (2/2)

This naturally left a number of regional observers suspicious – especially given the Saudi announcement on Thursday morning, a few hours before the unusual reporting about the Abu Dhabi airport, that in the wake of the missile incident in the Red Sea on Wednesday, Saudi oil shipments through the Bab el-Mandeb Strait and the Red Sea were being suspended.

This last point is an indication of the seriousness of what happened this week.  The Houthis, damaging an oil tanker with a missile, got the Saudis to change their operating profile for oil transportation by sea.  As noted in the media, the Saudi announcement caused crude prices to jump.

There are two significant factors to discuss about this.  We’ll take the more general, economic one first.

The impact of this on the Saudi oil trade will be limited, at least initially.  The transit suspension won’t affect shipments that leave the Red Sea oil terminal at Yanbu and head for the Suez Canal.  Those tankers start out north of the Houthis’ reach and don’t head into their threat envelope.

It’s the tankers coming from the Persian Gulf oil terminals, headed to the Suez Canal and European customers, that will be affected.

Saudi Arabia has a significant upgrade to another Red Sea facility at Muajjiz underway (last link) and expects to open it for business sometime in 2018.  But it’s not open yet, and there are no indications that it is about to go operational.

So there is a real potential for this latest Houthi attack to shift the structure of the oil trade in the Eastern hemisphere.

The Saudis can sell Persian Gulf oil to Asia, and the Europeans can buy oil from other sources.  The shift seems superficially minor.

But the precedent of forcibly restructuring vendor-customer patterns by using anti-ship missiles in a chokepoint sets the whole international community back at least 30 years.  The profile emerges on the horizon: of the Persian Gulf “tanker war” of the 1980’s, and the aperiodic but commercially significant threats to the oil trade in the two decades preceding the Iran-Iraq war.

Moreover, if the Bab e-Mandeb entry to the Red Sea is “closed” for the time being, for a significant portion of the Saudi export trade, the threat represented for Riyadh if the Strait of Hormuz is then closed as well has just gotten a whole lot bigger.

In strategic economic terms, this would be one half of a big pincer move on much of the Gulf oil trade, affecting not just the Saudis, but everyone with an economic interest in moving oil (and gas) from the producers in the Persian Gulf hub.

What else will the “Houthis” try in the days ahead?

The play by Iran

This is why it’s important not to miss the rhetorical spin-up by Iran just ahead of the Houthi threats and claimed attacks on 25 and 26 July.  That is most notably the case with the volley from Soleimani.

Soleimani is the chief architect of Iran’s proxy forces and proxy wars in the Middle East, for which the main stages are Syria, Iraq, and Yemen.  (Soleimani-trained and fielded Hezbollah groups have been embedded with the Houthis for several years now.  See here, here, and here.)

Moreover, the move by the Houthis isn’t just about confounding the Saudis and other local Saudi-coalition partners in their war to restore the recognized government of Yemen.  The Houthi move serves that purpose, but its larger purpose – Iran’s goal – is to open a front on the oil trade that can confound the United States, as long-time guarantor of freedom and safety for maritime commerce in the world’s vital chokepoints.

Soleimani’s modus operandi is to push out to lines of confrontation where he can advance Iran’s agenda, using proxies, as far from Iran as possible.  He will utter threats relating to both the Strait of Hormuz and the homeland of the United States – but he will seek to make things happen where America must either back down or be drawn in, at a logistically convenient distance (both geographic and political) from Iran.

I previewed the southern Red Sea and Bab e-Mandeb Strait as a secondary venue for a confrontation with Iran earlier in July, after the last round of Iranian threats to the Strait of Hormuz.  My point in that article was about the means – new-generation weapon systems and tactics – with which the U.S. could counter Iranian and Iran-backed activities, even without an aircraft carrier in the theater.

Soleimani certainly didn’t need my help to think up the concept of challenging U.S. power by rattling the saber through the Houthis in the Red Sea.  But the likelihood is strong that that is what’s going on.  Besides the timing of the Iranians’ fit of talkativeness, the pattern of strategy is telling.

Houthi and Iranian interests don’t overlap perfectly in this.  The Houthis attacked Saudi ships because the Saudis are leading a coalition in the Yemeni civil war.  For the Houthis, it would ultimately be counterproductive to attack other foreign shipping (although they can also declare UAE-flagged shipping fair game, and based on their threats this week, as well as a previous attack on a UAE ship, it seems they probably will).  Under current conditions, I wouldn’t expect the Houthis to actively draw other outside nations into their civil war by attacking third-party shipping.

The Iranians, however, would at some point want to see other foreign shipping put at risk for maximum effectiveness.  There are multiple ways to accomplish that, such as arming Al-Qaeda in the Arabian Peninsula (AQAP) factions holding coastline positions on the Gulf of Aden (through cut-outs if necessary), and using the Hezbollah “trainers” embedded with the Houthis for unclaimed, shoot-and-scoot attacks.  Once an Iranian-sourced weapon has been used, Iran can use it again and leverage uncertainty about who actually launched the attack.

We don’t know everything that’s going on with U.S. plans and regional consultations.  It is doubtful that the Trump administration is ignoring what just happened in the Red Sea.  Policing the world’s chokepoints for this kind of threat is just about the oldest charter of the U.S. Navy, and one that we have shouldered under most conditions since 1945.  We do it because it is to our advantage to keep maritime commerce safe using naval power: a proposition almost always superior to taking sides in local conflicts ashore, and invariably superior to letting ourselves or others be politically extorted with chokepoint threats.

If Iran slow-rolls this on a coy, shoot-and-watch timeline, it may unfold slowly.  Other measures – outside of tactical, small-scale confrontations like this – may be in the scope of U.S. plans already, and if they have a preemptive effect, little may come of this week’s work.

But if it does become a widening pattern in the Red Sea, it will have to be addressed.  We’ll be taking some of those carefully assembled unique capabilities out for a test-drive.