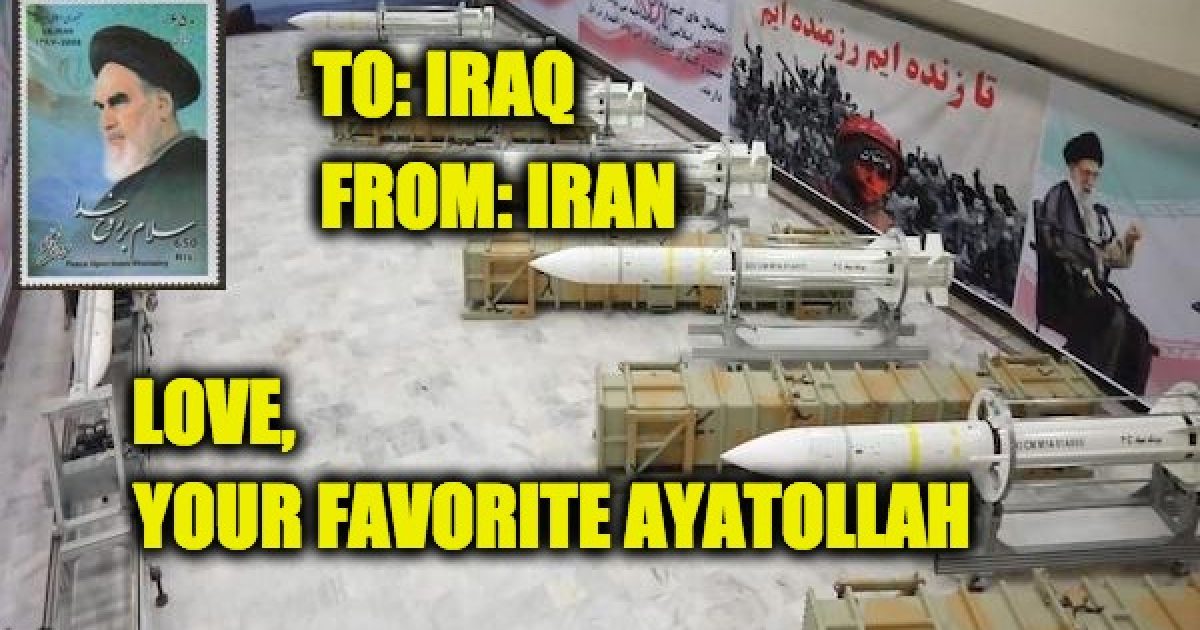 Reporting from Reuters, based on sources in Iran, Iraq, and Western intelligence agencies indicate that Iran is providing short-range ballistic missiles (SRBMs) to Shia militia forces in Iraq.

Iran has given ballistic missiles to Shi’ite proxies in Iraq and is developing the capacity to build more there to deter attacks on its interests in the Middle East and to give it the means to hit regional foes, Iranian, Iraqi and Western sources said. …

Iran has transferred short-range ballistic missiles to allies in Iraq over the last few months. Five of the officials said it was helping those groups to start making their own.

Secretary of State Mike Pompeo tweeted his concern about this development on 1 September:

Deeply concerned about reports of #Iran transferring ballistic missiles into Iraq. If true, this would be a gross violation of Iraqi sovereignty and of UNSCR 2231. Baghdad should determine what happens in Iraq, not Tehran.

And it is indeed a disquieting development.  In a post in July 2017, I previewed the likelihood of it in an extended analysis of the Syria-Iraq situation at the time.  I won’t rehash that analysis here, but it provides the background for the following important point about the new Iranian move.

This move is not about the twilight status of the “Iran deal,” or JCPOA, as the Reuters article suggests.  It’s about Iran’s geostrategic situation and intentions.

The Reuters piece (and hence much of the mainstream media coverage) is at pains to tie the ballistic missile gambit in Iraq to Trump’s reversal of U.S. concessions under the JCPOA.

But in the context of this particular development — moving short-range missiles into Iraq — the weapon systems in question have little if anything to do with that diplomatic game.  The Reuters report ticks them off:

The Zelzal, Fateh-110 and Zolfaqar missiles in question have ranges of about 200 km to 700 km, putting Saudi Arabia’s capital Riyadh or the Israeli city of Tel Aviv within striking distance if the weapons were deployed in southern or western Iraq.

These missiles are about two things:

1. Moving a conventional, tactical strike capability forward — and in particular, a capability that would form a deep-strike element for the advance of a ground force.

2. “Iraq-washing” the capability; i.e., putting it in Iraq, making it purportedly an asset of the Iraq-based Shia militias backed by Iran, so that attacking it requires attacking Iraqi interests on Iraqi territory.  This portends dragging Iraq into any beef the real target nations have with Iran: a complicating factor from every standpoint. 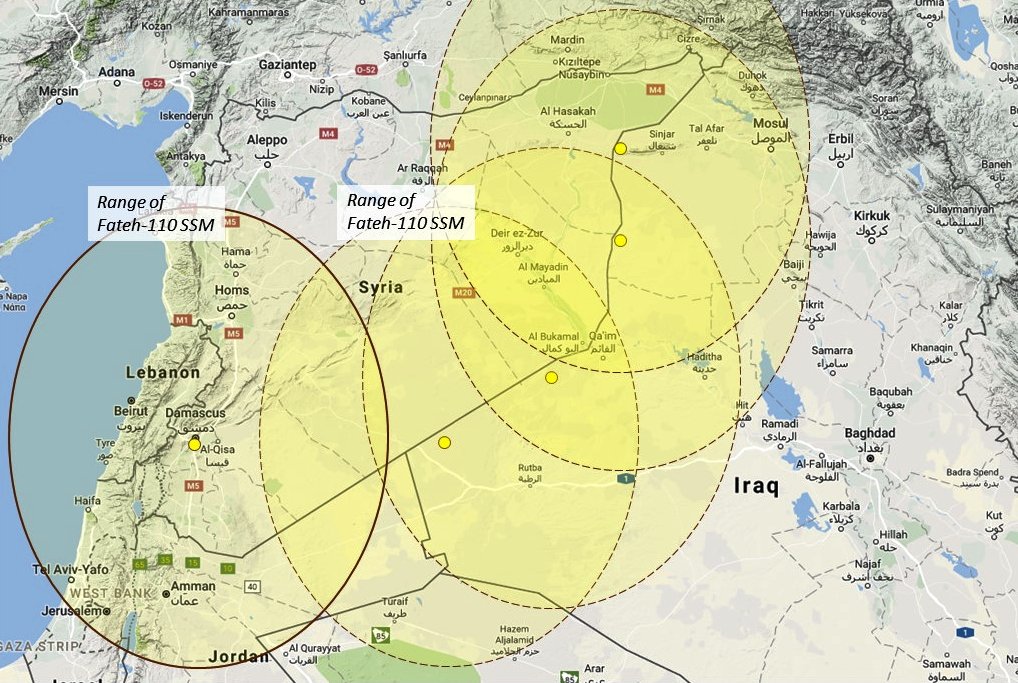 Syria already has Iran’s Fateh-110 SSM. This map depicts how Iran could deploy it to affect the ground fight in eastern Syria, using launch positions over the border in Iraq. (Google map; author annotation) 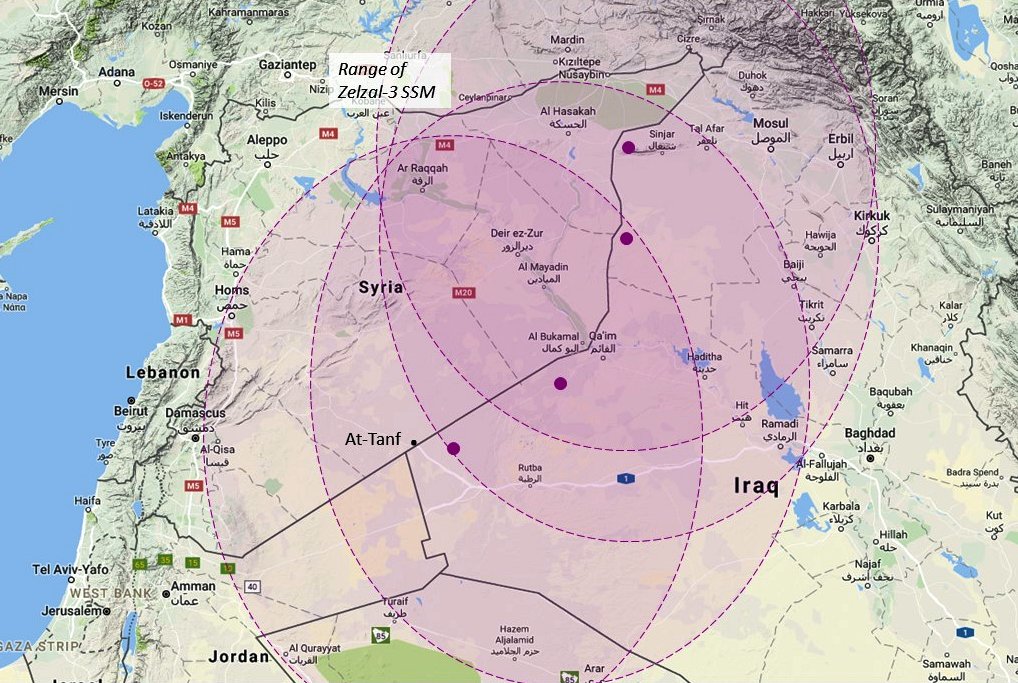 How Iran could deploy the Zelzal-3 SSM to support ground fighting in Syria, from across the border in Iraq. Note the threat range affecting Jordan and Saudi Arabia. (Google map; author annotation) 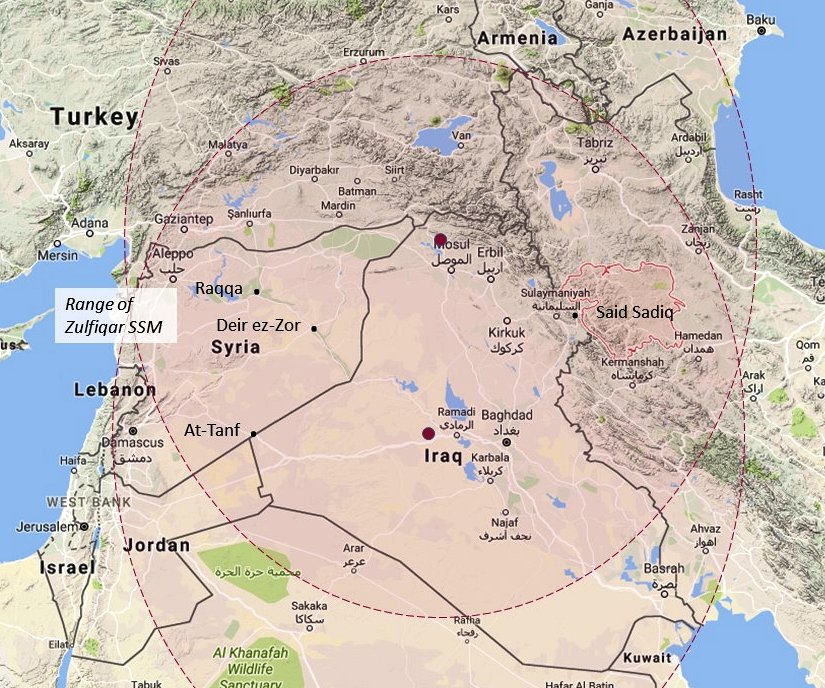 If Iran wanted to provide Zulfiqar coverage over all of Syria, launching from the positions depicted in Iraq would get the job done. (Google map; author annotation)

This move is one of the inevitable hazards the U.S. incurred by not moving in 2017 to close off the option for an Iranian “land bridge” across Iraq and Syria (see my 2017 post for more on that point).  Deciding to merely retain a nearby position in Syria, from which to hold that land bridge at risk, was a decision to let Iran do precisely this: build up assets in Iraq to improve — in Iran’s favor — the correlation of forces surging to make the land bridge a reality.

The current stock of missiles, if they are tolerated, will simply lead to Iran stockpiling more prepositioned assets in Iraq.  Air defense batteries and assault helicopters are by no means out of the question.  It will also mean that troops in the U.S. coalition, along with Saudis, Jordanians, and Israelis, will be held at risk by the forward-deployed missiles.

Besides Iran basically preparing the theater for a military advance, the time factor with doing it in slow motion will gradually condition other regional forces to Iranian and Shia-militia activities — desensitizing them to indicators that should put them on alert.  This is not a situation that should be tolerated.

It is not inconceivable that Saudi Arabia, Israel, or both will find a looming situation intolerable enough that they are compelled to take action.  The Iranians, in fact, seem to be at pains to advertise this move — very different from their frequent disavowals of activity in Syria — suggesting that the strategic planners in Tehran hope to provoke something with it.  (They certainly may hope to provoke a crisis that will take the pressure off their internal stability woes, as well as complicating the sanctions dynamic and the brewing standoff in the Persian Gulf.)

It’s all very well to lecture other status quo nations, like Israel and Saudi Arabia, on the importance of respecting borders and tending Westphalian order.  But a point is reached at which Westphalian order cannot be prioritized over dealing with the unendurable taking place on the other side of a border.  Iran moving tactical ballistic missiles into Iraq, with the obvious intention of holding Israel, Saudi Arabia, and Jordan at risk of intimidation, invasion, and/or attempts at neutralization, is the kind of development that rapidly becomes unendurable, and shifts Westphalian platitudes to the back burner.  It’s destabilizing in the extreme.

Nothing any longer holds this emerging situation in auto-check.  Obama took a jackhammer and blowtorch to the Pax Americana years ago, in his first term, and it isn’t coming back.  To turn this around, we would have to do something.

The day when “what we did” was made overt, stately-paced moves of our own are clearly in the past.  After eight years of Obama, we can’t simply proclaim principles and create stabilizing expectations.  That wand is no longer there to wave.

One of the chief obstacles to invoking our old post-1945 pattern now is that there is no consensus basis for justifying a significant U.S. move.  The authorization for the use of military force (AUMF) under which we are “fighting ISIS” in Syria doesn’t cover countering new proxy moves by Iran with theater-destabilizing weapon systems.  (Neither would the JCPOA.  Nothing in it would, in itself, justify countering the Iranian missile move.  And we can’t be more “withdrawn” from the JCPOA than we are, even if we declare the obvious: that Iran is proliferating arms in defiance of UN and U.S. sanctions that never went away.)

A major U.S. move involving force may not be necessary anyway.  But if we can’t talk Iraq down from being out on this limb, the move we end up making may well be providing diplomatic cover for a kinetic action by Israel or Saudi Arabia.  If either one has to make that move, the last vestige of a tether to the “old order” in post-World War I Mesopotamia will be gone.