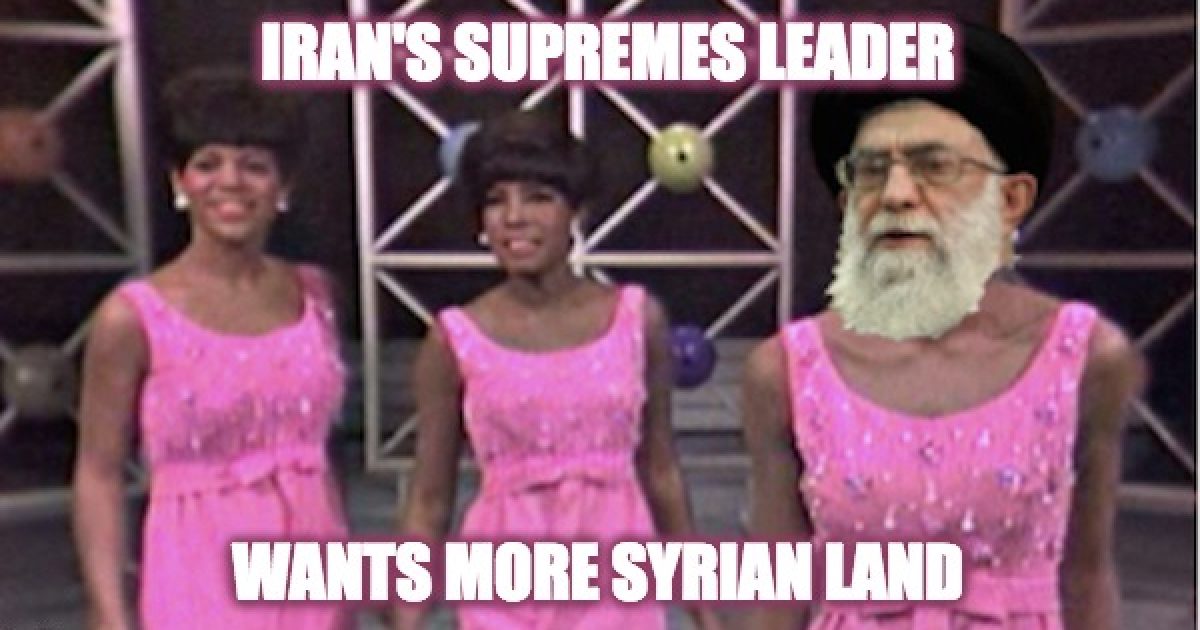 Since 2014, Iran has been taking advantage of the “fight against ISIS” to move Iranian and Iranian-backed forces into Iraq and Syria.

The campaign, spearheaded by Qods force commander Qassem Soleimani, began with Diyala Province in eastern Iraq and has spread through central Iraq to Tikrit, Fallujah, and Ramadi.  The campaign also involved a thrust into northern Iraq through As Sulaymaniyah to Mosul.  (See links below.)

In Syria, the Russian- and Iran-backed campaign to retake Syrian territory from anti-regime forces began in earnest about 11 months ago, with a concentrated initiative launched in late September and early October of 2016.  Little of the opposition in western Syria, where the campaign started, involved ISIS.

But as the campaign has pushed to the south and east, it has entailed more and more fighting against ISIS.  This is to Iran’s advantage because the U.S. coalition won’t defend or support ISIS.  (Claims to the contrary in Russian and Iranian national media are mere propaganda.)

Indeed, framing the fight in eastern Syria as a fight against ISIS has been the premise for the carving out of “safe zones,” which the U.S. coalition effectively cedes to Iran, and for the one-sided, U.S./Arab-free “Astana process” for negotiating on Syria.  America’s laggard, ISIS-limited approach to Syria has kept us out of position to block or even counter Iran’s encroachments on Syria (hence the Arab break with Iran-friendly Qatar a few months ago, when the progress of Iran’s cross-country campaign became increasingly assured).

Now, with ISIS being mopped up in Raqqa and Iran-backed forces pushing east from Damascus into Deir ez-Zor Province, the last chunk of eastern territory to be claimed is – Deir ez-Zor.

It’s not just the last meaningfully disputed part of eastern Syria, however.  (It’s not the last meaningfully disputed part of any of Syria, either.  Control of the eastern Golan in Quneitra, and Daraa Province, is still in dispute.  From the Golan redoubt, if it is not controlled by Iran, Israel can hold any approach to Israel from Lebanon or southern Syria at risk.  So Iran wants to gain full control of this area as well.)

The significance of Deir ez-Zor Province is that holding it is now the key to gaining a complete line of communication from Iran all the way to the Mediterranean.

Since 2013, Deir ez-Zor has been part of ISIS’s core territory: the Euphrates Corridor running from Raqqa to the western approaches of Baghdad.  In 2016, Iranian-directed forces pushed ISIS westward out of Ramadi and Fallujah (the approaches west of Baghdad).  Since then, with the fall of Mosul in 2017, and now the collapse of organized ISIS defense in Raqqa, ISIS has been increasingly squeezed into Deir ez-Zor Province.  There is still some ISIS-dominated territory in Iraq, upriver from Ramadi running to the Syrian border, but this territory is not well defended, and cannot be held if ISIS is dislodged from Deir ez-Zor.

A few weeks ago, I pointed all this out in a post proposing a U.S. coalition strategy to set the stage for a negotiated settlement in Syria.

Iran wants to gain control of Deir ez-Zor, because doing so will complete her land bridge across Iraq and Syria to the Mediterranean.  This move must be blocked if there is to be any hope of stabilizing the Middle East and keeping it peaceful enough to be habitable for its peoples.  If they are to have the opportunity for, prosperity, commerce, consensualism in politics, two-way access to other peoples and cultures, and lives that are not trapped between extremism, state corruption, and incessant infighting, radical-Islamic Iran must not be allowed to dominate the region.

If Iran is allowed to impose on the region, moreover, the instability will radiate outward in continuous waves, destabilizing everything around it.  Europe, the Mediterranean, Northern Africa, South Asia – none will remain as they are today.  The Iranian surge will spur Erdogan’s radicalizing Turkey to ramp up the neo-Ottomanism we have already seen for at least a decade.  It will also galvanize increasingly kinetic radicalism from the Sunni Arabs.  Completing Iran’s LOC to the Med isn’t the end of anything; it’s throwing the starting flag on the race of the region’s radicals to establish a caliphate.

The clear imperative for the U.S. coalition is to back rebel Syrian forces in defeating ISIS in Deir ez-Zor Province, and gaining control there.  With Kurdish forces dominating northeastern Syria, and the rebel forces holding Deir ez-Zor, the U.S. would enter hard settlement negotiations with a strong bargaining position – one that would honor our commitment to the Syrian rebels as well as meet the requirement of blocking Iran.

If Iran gains control of Deir ez-Zor, the outcome of any settlement negotiations would not only be effectively predetermined, but would have the added disadvantage of selling out Iraq completely over the long run.  We either win the fight for Deir ez-Zor for the U.S. coalition, and bolster Iraq’s independence on the other side of the border, or Iran gets her land bridge.

As if on cue, Iran is now arranging to “fight ISIS” in Deir ez-Zor, so as to both justify ramping up a fight there, and ensure against effective U.S. support for any non-ISIS fighters in the province.

The American military coalition strongly criticized on Wednesday a decision by the Lebanese Army and its allies to allow Islamic State fighters safe passage across Syria, and did not rule out airstrikes against the convoy, according to the coalition’s spokesman.

“We will take action where necessary; those would be absolutely lucrative targets,” Col. Ryan Dillon, spokesman for the American-led military coalition in Iraq and Syria, said. “We are monitoring them in real time.”

Make no mistake, as our old POTUS-in-Chief used to say.  ISIS is already in Deir ez-Zor.  The province is ISIS’ last area of concentration and defensive capability in eastern Syria.

But by offering ISIS a way out of Lebanon, what Iran is doing is easing her problem there, and shaping the fight for Deir ez-Zor by making sure ISIS will be harder to defeat in that more strategically pivotal location.  This won’t be the last time Iran tries this, no matter what we do about the busloads of ISIS heading across Syria on this particular day.

If ISIS is harder to defeat in Deir ez-Zor, then whichever attacker is willing and able to be more ruthless in the overall fight is the one that will prevail.  Iran hopes to arrange for that to be Iran, by tying the U.S. coalition’s hands in any support to a rebel force in Deir ez-Zor.  The rebels won’t be anxious to fight ISIS there at all, if Iran can make it too hard for America’s very defensive, triangulating tactical posture to be maintained.

Hence the seeming incongruity of escorting ISIS fighters from Lebanon to Deir ez-Zor.  If more ISIS can be shoehorned into Deir ez-Zor, no dithering half-effort by the U.S. will deliver the province to our partners on the ground.  We’ll have more difficulty, both logistically and in terms of motivation and morale, getting a sufficient force of ground-fighting partners into the province (where they don’t have strength in numbers at the moment).

Even as a few people in the U.S. are waking up to the threat of an Iranian LOC to the Med, Iran is working to preempt anything we may start imagining to do about it.  This is a problem that can’t be solved by delay, inattention, surreally limited aims, or negotiation from weakness.  We either reverse all those conditions, or Iran will win this one too.