I would pay money to see an Ilhan Omar perp walk on pay-per-view. 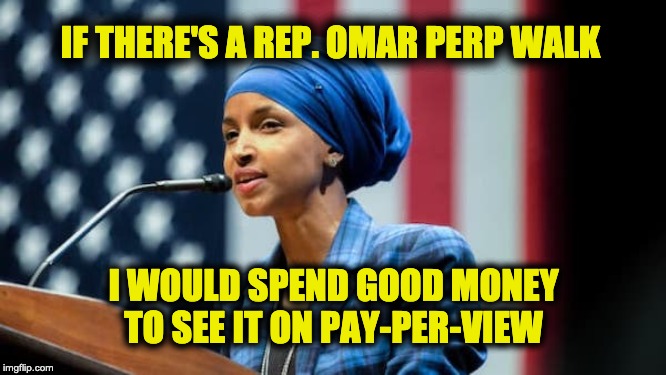 David Steinberg is reporting at the Blaze that the FBI and ICE are investigating Rep Ilhan Omar for activities between 2009 and 2017/ Those activities include the tangled web of her marriages to Ahmed Hersi and Ahmed Nur Said Elmi.

Federal investigators finally seem to be reviewing the overwhelming evidence against @IlhanMN.

And at least THREE agencies are considering her case:

Before we proceed with Steinberg’s latest report, allow me to suggest you might want to keep this timeline of Rep Omar’s life handy. It was mostly created by the Minnesota Star Tribune with some edits.

2008: Omar and Hirsi, now the parents of two children, reach an “impasse in our life together” and divorce in their faith tradition.

2009: Omar, at 26, marries Ahmed Nur Said Elmi, 23. Some contend he is her brother.  She identifies only as a “British citizen.” School records show he attended high school in St. Paul and studied art at North Dakota State University.

2011: Omar and Elmi end their relationship and divorce in their faith tradition, but do not legally divorce until 2017.

2012: Omar and Hirsi reconcile and have a third child together.

2016: Omar, endorsed by the DFL over longtime incumbent Phyllis Kahn, is elected to the Minnesota House, becoming the first Somali-American, Muslim legislator in the United States. But her campaign is rocked by allegations in a Somali news forum and the conservative Power Line blog suggesting that Elmi is her brother and they married for unspecified immigration benefits.

2017: Omar is granted a legal divorce from Elmi.

It is not confirmed that when she filed for divorce from Elmi, he exclaimed, “I’m telling mommy!”

David Steinberg has been investigating and reporting about Ilhan Omar for a few years. In his latest at The Blaze Steinberg reported:

“On Oct. 30, I reported that the Department of Justice had assigned an FBI Special Agent in Charge, or SAC, to review Rep. Ilhan Omar’s apparent, astonishing spree of felonies from 2009 to 2017,” he wrote.

Minnesota state Rep. Steve Drazkowski (R) had previously filed a complaint on the matter with the Minnesota District of the Department of Justice. That office — headed by U.S. Attorney Erica MacDonald, a 2018 Donald Trump appointee — directed the FBI to review the complaint. An FBI SAC formally met with Rep. Drazkowski, and others, in mid-October to receive a prepared file of evidence and related information.

I can confirm that the FBI has taken additional steps since this October meeting.

While Steinberg says that the FBI has taken additional steps, he doesn’t precisely explain what those steps were. But his previous reporting does point to potential crimes by the Congresswoman. Among other things, Omar, 38, is accused of marrying her brother, Ahmed Nur Said Elmi, in 2009 for him to gain entry to the United States. At the time, Elmi was living in London. Steinberg points to Elmi registration at North Dakota State University as a federal education violation, in addition to an immigration violation. Steinberg describes Omar’s crimes as “eight instances of perjury, immigration fraud, marriage fraud, up to eight years of state and federal tax fraud, two years of federal student loan fraud, and even bigamy.”

Incredibly — according to address records, and a statement from Omar herself — she was also still living with her first husband, and their two kids, throughout this second marriage.

Two at a time?  That’s why she has such a huge ego.  After all, this past October, she claimed that her critics despise her because they’re racists who can’t accept that she’s “one beautiful package.”  Sorry, Rep. Omar, but that’s a matter of personal preference and not the way I would describe you.

In 2017, Omar finally filed for divorce. Under penalty of perjury, she submitted a nine-question form to the court attesting to having lost all contact with her NDSU husband in June 2011.

Dozens of verified social media posts, photos, and even a 2016 interview with the NDSU husband indicate otherwise. It appears Omar perjured herself eight times answering those nine questions.

Steinberg is not alone, Judicial Watch filed a congressional ethics complaint against Omar in July 2019 saying she must be investigated for “perjury, immigration fraud, marriage fraud, state and federal tax fraud, and federal student loan fraud.”

The left-leaning Minneapolis Star-Tribune also reported on documents raising questions as to whether Omar married her brother as a means to “skirt immigration laws.”

It will be interesting to see if these additional steps as described by Mr. Steinberg result in some charges against Rep. Omar. If they lead to an arrest  I would pay money to see an Ilhan Omar perp walk on pay-per-view.