Russian Hacking Report Embedded & Analyzed (Their Conclusions Were Based On Nothing) 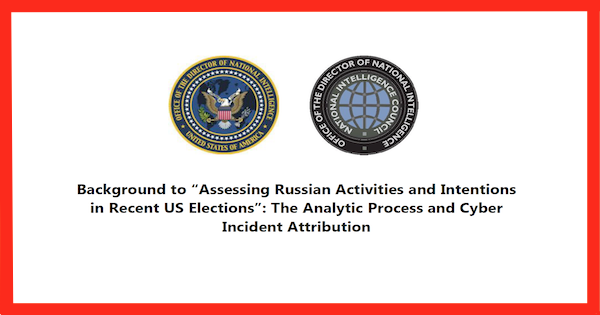 The Intelligence Community released their report on the hacking of the DNC and the Clinton campaign (full report embedded below) and in their opinion the reason for the hacking was that Vladimir Putin wanted Hillary Clinton to lose the election and preferred Donald Trump as president.

Because giving the specific evidence they have would compromise sources, the report was redacted and offered no specific evidence of the hacking, but it does prove the conclusions of the FBI, the CIA and the National Security Agency on their assessments of Moscow’s motives and intentions. Much of their conclusions on the motives were anecdotal in nature, i.e. Putin had been complaining about Hillary, so they concluded that he wanted Hillary to lose.

“Moscow’s use of disclosures during the U.S. election was unprecedented, but its influence campaign otherwise followed a longstanding Russian messaging strategy that blends covert intelligence operations — such as cyber activity — with over efforts by Russian government agencies, state-funded media, third-party intermediaries and paid social media users or ‘trolls,’”

The CIA, FBI and NSA all had their hands in preparing the report, two of the agencies (the CIA and FBI) was highly confident that Russia did the hacking to damage Ms. Clinton, the NSA was only moderately confident in that conclusion.

That conclusion wasn’t base on firm evidence:

“Putin most likely wanted to discredit Secretary Clinton because he has publicly blamed her since 2011 for inciting mass protests against his regime in late 2011 and early 2012, and because he holds a grudge for comments he almost certainly saw as disparaging him,”

“Beginning in June, Putin’s public comments about the US presidential race avoided directly praising President-elect Trump, probably because Kremlin officials thought that any praise from Putin personally would backfire in the United States. Nonetheless, Putin publicly indicated a preference for President-elect Trump’s stated policy to work with Russia, and pro-Kremlin figures spoke highly about what they saw as his Russia-friendly positions on Syria and Ukraine. Putin publicly contrasted the President-elect’s approach to Russia with Secretary Clinton’s “aggressive rhetoric.”

The report surmised that the  “Russian intelligence services tried to snoop on the candidates in the primaries, on think tanks and on important lobby groups.” You gotta feel bad for them, it means they had to watch all of the DNC debates.

The report also claimed that as the election drew closer the Russians were convinced that Hillary would win so their mission shifted to trying to de-legitimize the Clinton administration–just like what the Dems are trying to do to Trump. But what that shift really means is the Russians themselves thought the information they released was not having an effect on the outcome, so they went after a “president” Clinton.

Additionally they believe the Russians access to the Democratic National Committee’s network from July 2015 through at least June 2016, with its military intelligence service compromising Democratic Party officials’ email accounts between March and May of this year, the U.S. agencies said.

They also claim that the RT Network (formerly Russia Today) got the information from Russian intelligence to WikiLeaks head, Julian Assange. Which is very possible. In his interview with Sean Hannity, Assange said it wasn’t anyone connected with the Russian Government or parties, He did not exclude Russian media.

The Report did say the emails that Wikileaks published seemed to be legit.

The report below is an interesting read, the part of it that I find most suspicious was the Russians wanted Hillary to lose. I personally believe that they were trying to destroy our confidence in the free and fair elections no matter who lost.  There are plenty of reasons for Putin to want Hillary to win. The Clinton Foundation was VERY good to Putin and his friends, Trump was for drilling oil which will lower the price of crude and damage the Russian economy, and Trump wants to reinvigorate the military.

Over all to believe the report one has to take a lot of their conclusions based on faith, especially after reading the disclaimer on the 6th page labeled “i” on the bottom:

Many of the key judgments in this assessment rely on a body of reporting from multiple sources that are consistent with our understanding of Russian behavior. Insights into Russian efforts—including specific cyber operations—and Russian views of key US players derive from multiple corroborating sources.

Some of our judgments about Kremlin preferences and intent are drawn from the behavior of Kremlin-loyal political figures, state media, and pro-Kremlin social media actors, all of whom the Kremlin either directly uses to convey messages or who are answerable to the Kremlin. The Russian leadership invests significant resources in both foreign and domestic propaganda and places a premium on transmitting what it views as consistent, self-reinforcing narratives regarding its desires and redlines, whether on Ukraine, Syria, or relations with the United States

In other words they based some of their conclusions on Russian news media, twitter, Facebook, etc. Doesn’t instill much confidence in me.

Enjoy the full report below