The Intel Community is Clamoring for the “Comey Tapes” 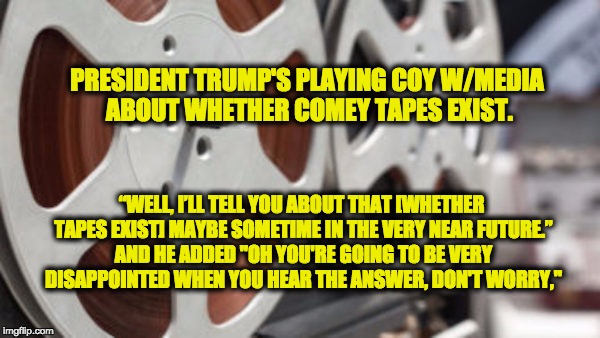 Washington D.C. was all aflutter this week in anticipation of the James Comey testimony in front of congress, and there is no sign of the hysteria letting up anytime soon.

The disgraced former FBI Director appeared before Congress on Thursday to answer questions stemming from his termination at the hands of President Donald Trump just weeks ago.  Many democrats believed that Comey’s release was due, at least in part, to an ongoing investigation into Donald Trump’s purported connections to the Kremlin that the left believes the President used to secure his 2016 electoral victory over Hillary Clinton.

Instead, what the left received was a whole lot of nothing on that front.  Yes, there is an ongoing investigation into attempts made by the Russians to influence the election itself, but even James Comey was forced to admit that Donald Trump himself is not under investigation.

In the midst of the hullabaloo, President Trump has alluded to the possibility of recordings of conversations between himself and Comey that are directly related to the issue at hand.  Now, the intelligence committee overseeing the investigation would like to get a listen to those audio snippets.

“The House intelligence committee is inquiring into whether or not President Trump taped his conversations with former FBI director James Comey.

“The committee’s chairman, Rep. Mike Conaway Texas, and the ranking Democrat, Rep. Adam Schiff of California, reportedly sent a letter on Friday to White House Counsel Don McGahn demanding the release of any ‘tapes’ of conversations or memos between Comey and the president.

“In addition, the House committee and a Senate committee sent a letter to Comey on Friday, requesting any notes in his possession that describe the meetings he had with Trump, be turned over to them by June 23, as reported by The Hill.

“The media went wild last month after Trump first claimed to have ‘tapes’ of his private conversations with Comey at the White House. The actual existence of such tapes has not been officially verified.”

For what it’s worth, James Comey himself indicated that he hoped such recording do exist, as they believe the content contained within would corroborate his version of events.

Whether the claim of tapes is a factual one, or a high-level bluff by the President in order to draw out the weakness of his newfound enemies is yet to be seen. Our vote is that the President is bluffing. During his Friday press conference Pres. Trump said he would not rule out his previous claims that there may be tapes of the conversation with Comey and told reporters, “Well, I’ll tell you about that maybe sometime in the very near future.” And he added “Oh you’re going to be very disappointed when you hear the answer, don’t worry,” a suggestion that the tapes do not exist.

However should they exist, and should the purported recordings make it to the light of day, or to a congressional hearing, they could finally spell the end of this unheard of Washingtonian nonsense once and for all, allowing the President to get back to work making America great again.