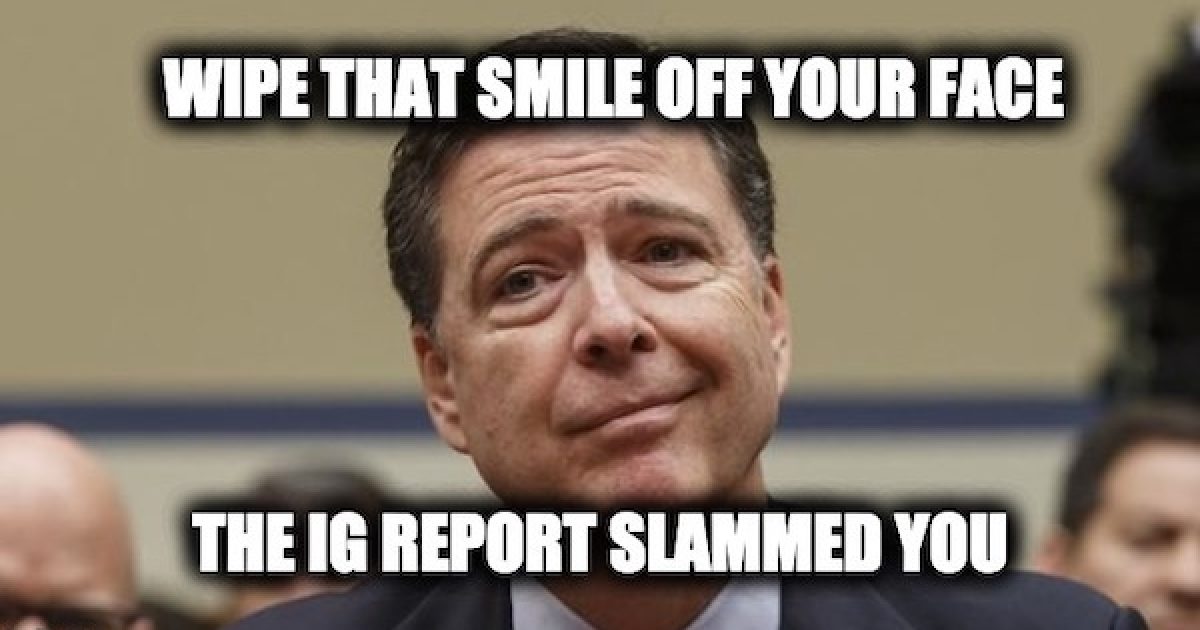 The Department of Justice Inspector General Michael Horowitz released his report on former FBI Director James Comey   (embedded below) covering his handling of his of the memos he wrote after each meeting he had with President Trump. The report skewers Comey saying he violated bureau policies and his employment agreement by drafting, leaking and retaining memos documenting discussions with President Trump. It also slams his leadership because his actions for setting a dangerous example for the “over 35,000 current FBI employees—and the many thousands more former FBI employees—who similarly have access to or knowledge of non-public information.”

Comey has always claimed he leaked the memo to force the appointment of a special prosecutor, but the IG said that was no excuse:

The responsibility to protect sensitive law enforcement information falls in large part to the employees of the FBI who have access to it through their daily duties. On occasion, some of these employees may disagree with decisions by prosecutors, judges, or higher ranking FBI and Department officials about the actions to take or not take in criminal and counterintelligence matters. They may even, in some situations, distrust the legitimacy of those supervisory, prosecutorial, or judicial decisions. But even when these employees believe that their most strongly-held personal convictions might be served by an unauthorized disclosure, the FBI depends on them not to disclose sensitive information.

Referring to his McCabe report, the IG wrote, “We have previously faulted Comey for acting unilaterally and inconsistent with Department policy.”  Then he blasted Comey’s leaks about General Flynn:

Comey’s unauthorized disclosure of sensitive law enforcement information about the Flynn investigation merits similar criticism. In a country built on the rule of law, it is of utmost importance that all FBI employees adhere to Department and FBI policies, particularly when confronted by what appear to be extraordinary circumstances or compelling personal convictions. Comey had several other lawful options available to him to advocate for the appointment of a Special Counsel, which he told us was his goal in making the disclosure. What was not permitted was the unauthorized disclosure of sensitive investigative information, obtained during the course of FBI employment, in order to achieve a personally desired outcome.

The ex-Director kept copies of four out of the seven memos in a personal safe at home after president Trump kicked him to the curb.

Comey violated these Department and FBI policies by failing to surrender his copies of Memos 2, 4, 6, and 7 upon being removed as FBI Director and by failing to seek authorization to retain them. Comey’s explanation for his conduct was that he considered the Memos to be personal records, but for the reasons previously described, this assertion is without any legal basis. In view of the clarity of relevant provisions of law, policies, and Comey’s Employment Agreement, the assertion that the Memos were personal records was not reasonable. We found it particularly concerning that Comey did not tell anyone from the FBI that he had retained copies of the Memos in his personal safe at home, even when his Chief of Staff, the FBI’s Associate Deputy Director, and three SSAs came to Comey’s house on May 12, 2017, to inventory and remove all FBI property

The IG did say, “We found no evidence that Comey or his attorneys released any of the classified information contained in any of the Memos to members of the media,” and Comey did brag about it on Twitter.

DOJ IG "found no evidence that Comey or his attorneys released any of the classified information contained in any of the memos to members of the media." I don’t need a public apology from those who defamed me, but a quick message with a “sorry we lied about you” would be nice.

The former FBI director should be ashamed of himself. Comey’s claim of exoneration is ridiculous. While he is correct that the IG didn’t say he leaked classified information,  but he did leak. IG Horowitz did slam him for violating FBI and Justice Department policies, and his employment agreement on handling information about sensitive law enforcement investigations. That’s the same thing he did with the Hillary investigation.

Even more damaging to Comey’s claim is that CNN called it damning.

Ironically Horowitz points out that when he testified before the House in March 2017, Comey pointed out why the department does not share information about investigations that have not been concluded–something he ended up doing anyway.

Because it is an open ongoing investigation and is classified, I cannot say more about what we are doing and whose conduct we are examining…. I know that is extremely frustrating to some folks. I hope you and the American people can understand. The FBI is very careful in how we handle information about our cases and about the people we are investigating…. Our ability to share details with the Congress and the American people is limited when those investigations are still open, which I hope makes sense. We need to protect people’s privacy…. We just cannot do our work well or fairly if we start talking about it while we’re doing it.

James Comey spent his career making charges based on politics simply to make himself look good. However, his final investigation has served to destroy what was left of his reputation.

A few weeks ago, the DOJ announced it would not prosecute Comey for these actions, but this is not the final report about Comey’s actions regarding his attempts to undermine the Trump presidency.

The full IG report is embedded below.

ComeyIG by Jeffrey Dunetz on Scribd