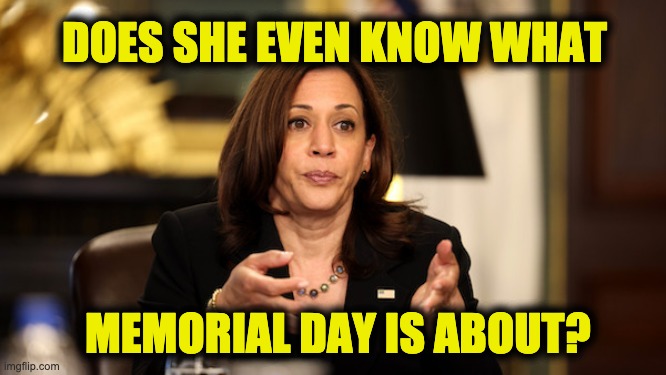 It is okay to go eat a hot dog this week.  And there is no issue with zooming around on the lake or sipping cold beers on the beach over this Memorial Day holiday weekend.  But these activities are not the reason for Memorial Day, and allowing this fact to be forgotten is something that patriotic Americans have been fearful of for some time. It’s most offensive when the one forgetting is the Vice President of the United States. insensitive Memorial Day tweet

Our ability to relax and enjoy the extra time off is directly thanks to the men and women of the armed forces, who throughout our nation’s history have fought and died to protect the freedoms that we are afforded here in the United States.  Our leisure was paid for by their sacrifice, and being unwilling to acknowledge that has long been considered an unforgivable act…especially in politics.

This is why a recent tweet by Vice President Kamala Harris is getting so much negative attention this weekend.

Care to mention WHY we’re having a long weekend, Kamala?

I’ll never forget how we honored our fallen heroes on Memorial Day in Baghdad https://t.co/l1qoQuLfb4

Twitter users were scathing in their prolonged response to the tweet, with many suggesting that this is yet another symptom of the left’s disdain for our military. At least the Democratic Party socialist left.

I know you think the “long weekend” is a chance to post a pic of yourself and get some mimosas as you plan to rip our country apart but it’s actually a time to appreciate the brave soldiers who died for our country & to reflect on the LIFETIME their families spend without them.

Don’t forget why we have a long weekend! pic.twitter.com/kbNzDiSsDr

You cheapen everything you touch.
It’s not about you, or about a #LongWeekend.
Show a little respect, child. pic.twitter.com/YsLLEXYOBp

After having her butt kicked on Twitter from one coast to the other, Harris figured out why we have Memorial Day–well either she figured it out or her handlers did. The day after her insensitive long weekend tweet, she sent:

Throughout our history our service men and women have risked everything to defend our freedoms and our country. As we prepare to honor them on Memorial Day, we remember their service and their sacrifice.

As Vice President of the United States, that was the tweet she should have sent out first.