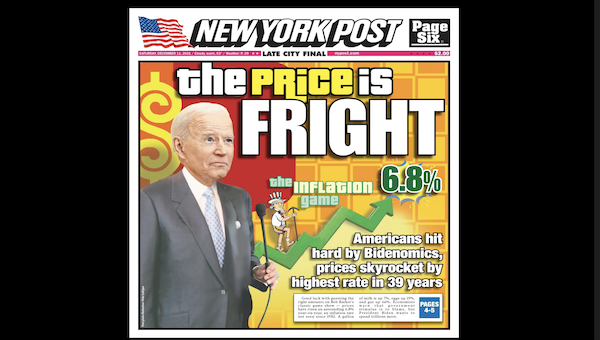 James Meeks, the owner of Triple M Farms in Arkansas, told the committee he is paying $500 more per ton for fertilizer now compared to a year ago. “We need some help out here,” Meeks said. “I think it’s time for us to wake up. Between the labor issues, petroleum costs, trucking problems, and government regulations, my costs are going up.”

A third-generation trucker, Randy Guillot, president of Triple G Express in New Orleans, told the committee one of his top concerns, aside from high fuel costs, is President Joe Biden’s vaccine mandate. “We already have a shortage of drivers, and his mandate threatens to make that worse.”

Ruel Joyner, CEO of a Savannah furniture design and manufacturing company, told the committee that before the pandemic, a shipping container to transport his furniture cost $2,400. Today that same shipping container costs $24,000. “That means it costs me roughly $700 more to ship a couch,” Joyner explained.  “Small businesses are failing because of these costs,” Joyner added.

Joyner pointed to the government’s pandemic-era policy of “paying workers to stay home” as the problem. “When businesses started to reopen, and people were getting back to normal, the federal government mandating private health decisions and shamed those who had conscientious objections, further hindering a return to a normal, healthy workforce.”

“The Biden administration tells us they are trying to help us, but it is actually hurting us by putting up barriers to returning to a healthy, sustainable number of workers,” Joyner concluded.

Diana Furchtgott-Roth, an  adjunct professor of transportation economics at George Washington University, told the committee  the federal government’s massive spending bills have overheated the economy and are to blame for inflation, which she said: “will not end soon.”

“By 2021, the economy was on the road to recovery, and additional stimulus reduced work incentives and began to cause inflation. In the third quarter of 2020, GDP rose by 33.8 percent at an annual rate, followed by an increase of 4.5 percent in the fourth quarter. Nevertheless, despite this strong growth, in March 2021, President Biden signed the American Rescue Plan, with another $1.9 trillion in spending. The economy saw strong annualized growth of 6.3 percent in the first quarter of 2021 (the quarter the American Rescue Plan was signed), and 6.7 percent in the second quarter of 2021. Due to supply chain shortages, the increase for the third quarter of this year was 2.1 percent.

“Signing into law the American Rescue Plan, with additional checks mailed out, and expanded unemployment benefits, was as though Uncle Sam gave everyone coupons to eat at McDonalds but told employees not to show up for work. In such a case, it is easy to see that there would be lines and shortages since consumers have spending power while workers stay home.

“The Federal government is still sending out checks, such as child credits, without requiring that people work or develop other habits to keep them out of poverty.”

“The Build Back Better Act will do further harm to supply chains because it will provide more incentives to keep workers out of the labor force,” the former Deputy Assistant Secretary for Research and Technology at the U.S. Department of Transportation added.

Furchtgott-Roth concluded by referencing University of Chicago professor Casey Mulligan who said the Build Back Better bill would result in 9 million fewer Americans working over the next decade.

“Professor Mulligan calculates that expansion of the Affordable Care Act and Medicaid would take 4.5 million workers out of the labor force; paid family leave would take out another million, and new affordable housing subsidies would reduce workers by another half million,” said Furchtgott-Roth. ” He calculates that 10 other provisions would shrink the workforce by an additional 2.5 million workers. This is because the bill provides an array of benefits that people could get only if their incomes were below a certain level. Working would mean that incomes for many Americans would be too high to get the benefits, so they would be better off staying at home. Additional entitlements will discourage work. These additional benefits would worsen supply chain problems by providing more entitlements to individuals, further increasing aggregate demand.

Furchtgott-Roth urges Congress to reject the Build Back Better Act “in its current form.

A video of he testimony follows: