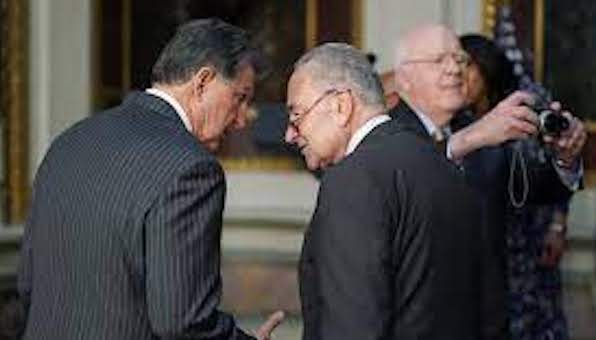 inflation reduction act
The infamous bill that Sens. Joe Manchin and Chuck Schumer recently sneaked in with some subterfuge will not quell soaring inflation, despite being called “The Inflation Reduction Act of 2022.”

A goodie bag of green corporate handouts, it encompasses the same tax and spend hijinks that were part of the original Build Back Better failure. Unless you redefine what constitutes inflation, this will only make the pain worse.

The only other halfway-sane Democrat senator, Arizona’s Kyrsten Sinema, may be the last chance to derail the boondoggle. She was recently described as “totally shocked” over not being consulted on such an important maneuver.

After more than 18 months of rising prices crippling Americans, the profligate bill will raise them more. Since studies now show the preponderance of Democrats are now wealthy, overeducated, urbane, and white, it’s possible they simply don’t care whether minorities and middle-class Americans can buy groceries and drive to work.

Even if brainwashed members of Al Gore’s cult believe natural summer weather patterns are an existential threat to humanity, energy will not become more affordable by pumping money into failed green technology. We’ve proven this for decades. Pay attention!

Why would a West Virginia senator support a proposal that imposes new taxes on natural gas and coal production? The Mountain State is the nation’s second-leading coal producer and receives nearly 90% of its electricity from coal.

Only a month ago, Manchin said, “I don’t think during a time of recession you mess with any of the taxes or increase any taxes”; then, three weeks ago, responding to June’s disastrous inflation report, the West Virginia moderate supposedly told Schumer he was done with any climate bill.

"I've never changed or evolved my thinking, I always felt that we should be able to fight inflation and try to give relief to people all over America right now to the highest inflation rates they've ever seen." – @Sen_JoeManchin

“If you’re pitching the exact same policy but saying it solves whatever the current political or substantive problem is, I don’t believe you; you don’t have credibility. This is the same bill from a year ago, but now they’re calling it an Inflation Reduction Act. And it’s announced hours before we get the new GDP numbers, two quarters in a row of a decrease, colloquially means it’s a recession.”

Democrats preferred to confiscate several trillion dollars of your money but will settle for $430 billion.

Reading through the 720 insufferable pages proves the bill does almost nothing beneficial unless you want higher prices and more government dependency. And those prices mean Americans will buy fewer products while rising interest rates slow the housing market and make obtaining loans more difficult.

Bottom line: H.R. 5376 lines the pockets of special interest groups, advances a radical left-wing agenda, and with fewer energy choices, will make Americans suffer — while having zero effect on the “climate” too.