It's A Dysfunctional Relationship 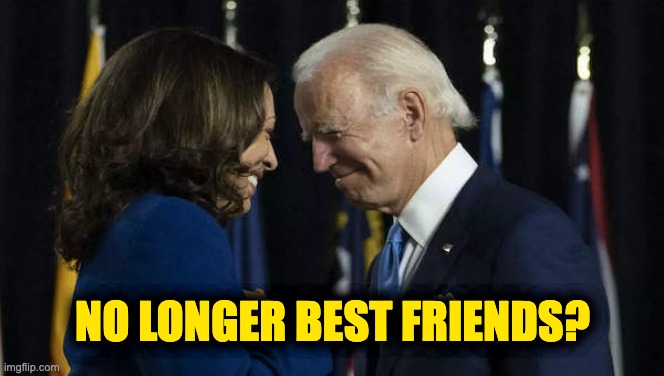 When an administration’s approval begins to tank, generally, there’s dissension in the ranks. While Biden’s approval has fallen into the toilet but  Harris’ has gone down even lower. As that has happened, there were been questions of why Kamala Harris had suddenly stopped being seen with the President. CNN may have provided the answer.

The network spoke to nearly three dozen administration insiders and found that the President’s team and the V.P.’s team had a dysfunctional relationship. Neither side trusts the other. Team Biden feels that Harris doesn’t follow through. Team Harris feels that team Biden doesn’t have her back and gives her lousy tasks.  infighting between Biden and Harris

Worn out by what they see as entrenched dysfunction and lack of focus, key West Wing aides have largely thrown up their hands at Vice President Kamala Harris and her staff — deciding there simply isn’t time to deal with them right now, especially at a moment when President Joe Biden faces quickly multiplying legislative and political concerns.

Many in the vice president’s circle fume that she’s not being adequately prepared or positioned, and instead is being sidelined. The vice president herself has told several confidants she feels constrained in what she’s able to do politically. And those around her remain wary of even hinting at future political ambitions, with Biden’s team highly attuned to signs of disloyalty, particularly from the vice president.

Harris supporters are wondering why the President’s team has allowed her to look so weak and that he doesn’t have her back, “Republicans and right-wing media turned Harris into a political target from the moment she was picked for the ticket. And implicit racism and sexism have been constant.”

Ah, the old leftist go-to claims of racism and sexism.

Some on the Harris team say the White House is spending its time to defend the President because he’s a “white man.”

“It’s hard to miss the specific energy that the White House brings to defend a White man, knowing that Kamala Harris has spent almost a year taking a lot of the hits that the West Wing didn’t want to take themselves,” said a former Harris aide, reflecting conversations last month among several former aides and current allies.

The Biden Team began to lose faith in Harris because of her reaction to and lack of handling her border assignment:

Harris’ team was mad Biden had assigned her to handle diplomatic relations with the Northern Triangle nations, in hopes of addressing the root causes of migration to the US, but gave her no role on the southern border itself. That become the most visible crisis in the early days of Biden’s presidency as unaccompanied minors overwhelmed federal government resources. It seemed like an all-around politically losing assignment even though Biden had seen it as a sign of respect because it was the same job Obama had given him as vice president.

As CNN has previously reported, Harris herself has said she didn’t want to be assigned to manage the border, aware that it was a no-win political situation that would only sandbag her in the future. But Biden’s team was annoyed that Harris fumbled answers about the border, including when she gave an awkward, laughing response about not visiting it during a spring interview with NBC’s Lester Holt.

Despite the CNN claim, Northern Triangle “diplomacy” was added by the administration to protect Harris.  She didn’t want the assignment and did everything to avoid it. Harris first refused to address the humanitarian crisis on the border head-on, insisting that her strategy would focus on climate change, citing that as a “root cause” of illegal immigration.  Finally, after repeated cries for her to see the problem herself, Harris went to the border—sort of.

She went to El Paso right on Texas’ Western tip, with a much quieter border situation. El Paso has one distinguishing feature that makes it different from Rio Grande Valley—it has a border wall. At the time Harris claimed to have gone to the border, the crisis hot spot was McAllen, Texas—791 miles away from El Paso. The hottest site lately is Del Rio, Texas— 425 miles away from where Kamala visited. Even when she went to El Paso, she didn’t go to the Mexican border, the wall near the city.

Then there’s the frequent complaint of a lack of follow through from the vice president’s office, such as on the southern border.

When Fernando García, executive director of Border Network for Human Rights, met with Harris during her visit to El Paso, Texas, this summer, he was optimistic about her potential influence on immigration policy. But months later, García says she “disappeared.” “We haven’t heard any substantive messaging push for better immigration policies,” he told CNN. “We haven’t seen her leadership.”

The NY Post points out that Eleni Kounalakis, the lieutenant governor of California and a longtime friend of Harris, confirmed there is irritation. “It is natural that those of us who know her know how much more help she can provide than what she is currently asked, “That’s where the frustration is coming from.”

This site’s been very critical of Joe Biden because he’s deserved it,  but he is more correct in this case. When I was a corporate manager, it was impossible to give someone more responsibility until they proved themselves on the assignments they did have. Harris didn’t even make a show of trying to fix the illegal immigration problem. But on the other hand, Harris has a point. Team Biden rushed to defend Pete Buttigieg when he was being blasted for his paternity leave. Which most of the time they do not do for Kamala Harris.