UKRAINE? The Logic Dems. Used to Impeach Trump Means They Must Impeach Biden 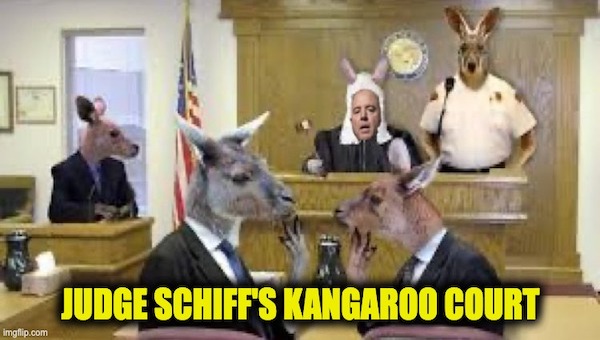 Remember when Schiff led that charge to have Trump impeached the first time? The logic they marshaled against Trump has just boomeranged against Biden.  impeach Trump the first time

The allegations Democrats brought against Trump fell flat. But if they raised those very same questions against Joe Biden, they would be obligated to impeach him.

As most of us will remember, there was a lot of drama leading up to Impeachment 1.0. Schiff fired the opening salvo with a leaked phone transcript and a mysterious whistleblower. Schiff made his own ‘dramatic interpretation’ of that phone call’s contents only to furiously backpedal when Trump authorized the actual release of the written transcript.

Further, we saw some ridiculously lopsided evidence-gathering rules in which evidence that would have helped exonerate the accused (President Trump) was never released from the SCIF. It is important to remember that the whistleblower himself was said to only have had indirect knowledge of the phone conversation.

For the most part, two lines of reasoning were used in their attempts to incriminate Trump.

First, they focused on Trump’s request of Zelensky to look into allegations of corruption in Ukraine that involved a particular US citizen named Hunter Biden helping get a Ukrainian prosecutor fired for, perhaps, illicit reasons.

POTUS: Good, because I heard you had a prosecutor who was very good and he was shut down and that’s really unfair. A lot of people are talking about that, the way they shut your very good prosecutor down and you had some very bad people involved. Mr. Giuliani is a highly respected man. He was the mayor of New York City, a great mayor, and I would like him to call you. I will ask him to call you along with the Attorney General. Rudy very much knows what’s happening and he is a very capable guy. If you could speak to him that would be great. The former ambassador from the United States, the woman, was bad news and the people she was dealing with in the Ukraine were bad news so I just want to let you know that. The other thing, There’s a lot of talk about Biden’s son, that Biden stopped the prosecution and a lot of people want to find out about that so Biden went around bragging that he stopped the prosecution so if you can look into it… It sounds horrible to me.

Second, the Dems claimed Trump was withholding Ukraine’s military aid as leverage to make him comply, making Ukraine more vulnerable to Vladimir Putin in the process. They can’t help themselves. The Democrat Russian Collusion fantasy is an undead beast that cannot die no matter how many bullets you put into its brain.

Ukraine did get that money. There was a 30-day hold put on the cash to ensure that money being sent to one of the world’s most corrupt countries went to proper use, and the check cleared.

So the ‘quid pro quo’ allegation was on shaky ground from the beginning. There never was enough to convict Trump. It’s a good thing, too. Because recently uncovered emails showed that some of the same people who were called as witnesses during Impeachment 1.0 had already spoken up about the corruption of Hunter Biden causing problems in Ukraine.

ClashDaily covered that dumpster fire here: Will Hunter Email Leak Make Pro-Impeachment RINOs Apologize … And What Does This Say About Jan 6?

Before we turn our attention to Biden’s impeachable conduct, this is a good opportunity to remind our readers about Schiff’s sketchy involvement in the set of Impeachment 1.0 from the beginning. Not only was he the ringmaster of the corrupt 3 ring circus, and not only did he have connections with mister Vindmann and the whistleblower (Eric Ciaramella?), not only did he send a member of his staff to Ukraine to gather information from Ukraine BEFORE the impeachment action began, but  Shifty had some, shall we say, ‘interesting’ foreign connections with Ukraine BEFORE the impeachment inquiry had officially begun.

Even more interesting than the trip itself is the organization that sponsored it. There are some other interesting coincidences in there too.

There were known issues of Hunter Biden’s corruption, and his being on the payroll of a manifestly corrupt corporation Burisma, which US sources already admitted had paid out a multi-million dollar political bribe while Hunter was on the Board. Meanwhile, Hunter had been pressuring the Obama White House (where his dad was veep) to change their Ukraine policy to be more amenable to Burisma’s priorities. Joe Biden himself bragged about using US foreign aid as leverage to force Ukraine’s firing of the same prosecutor Trump had been asking about.

Joe Biden’s own self-evident corruption was the problem Trump asked Ukraine’s President to look into. And the media refused to cover it.

By Democrat standards — and any historical standards — that kind of entanglement of foreign policy and financial gain is reasonable grounds for impeachment.

As this is written, Putin has more than 100 thousand troops poised on Ukraine’s border, ready for Putin’s order to advance, if indeed that is the plan.

You might think the party that used a 30-day review of finances being sent to Ukraine as a cudgel to demand ‘impeachment’ might be careful not to do anything that would look like they had been infringing on Ukraine’s ability to defend itself against potential Russian aggression.

Naturally, they did something much, much worse than putting a 30-day pause on weapons funding.

Sure there have been reports of Biden’s administration pushing a surge of defense funding to Ukraine in the last few weeks. NPR made a big deal out of figures like $200M and 90 Tons, but why did they need to suddenly surge that funding?

Why on God’s green Earth would Joe want to do a thing like that? Well, Putin asked him nicely.

The Biden White House has temporarily halted a military aid package to Ukraine that would include lethal weapons, a plan originally made in response to aggressive Russian troop movements along Ukraine’s border this spring.

The aid package would be worth up to $100 million, according to four people familiar with internal deliberations.

…But officials on the National Security Council ended up putting the proposal on hold after Russia announced it would draw down troops stationed near Ukraine and in the lead-up to President Joe Biden’s high-stakes summit with Russian President Vladimir Putin.–Politico, June 2021

In late November, we were already seeing speculation that Putin would be making moves on Ukraine sooner rather than later, and troops had massed on the border. Did Ukraine Just Uncover Plans For A Coup And Russian Invasion Next Month?

Did Joe rush lethal aid to Ukraine in response to a credible threat like that?

Nope. Quite the contrary.

The Biden administration prepared a $200 million package of additional military assistance for Ukraine in recent weeks but held off on delivering the aid despite appeals from Kyiv and some lawmakers, according to three people familiar with the issue. — NBC News Dec 10,2021

If Townhall was reminding us about impeachment way back in June of 2021, how excited must Adam Shiff be now that he has an opportunity for a third chance at running the impeachment trial of a president?

But there’s always the Mid-terms. Between tagging Joe for this and Afghanistan and tagging Kamala for the border, the election of House leader might be of particular importance for once.

Is that scenario an extreme long shot? Sure.

But even that scenario is more rooted in demonstrable facts than anything we saw in the 2 kangaroo courts with which Pelosi, Schiff, and Nadler stained their gavels.