You Thought Russiagate Was Over? Not So Fast 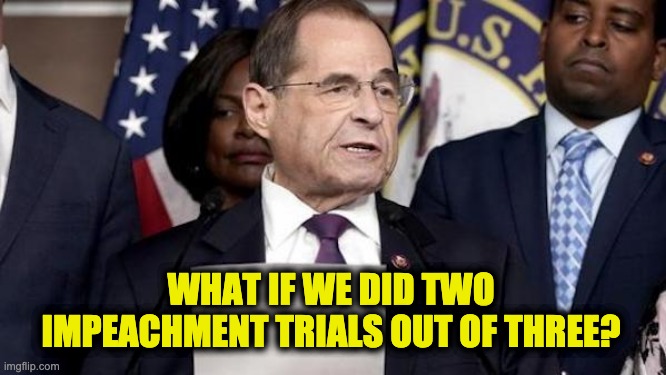 Just when you thought it was safe to turn on your TV set, House Democrats want to bring you a rehash of an old TV show; Russiagate Impeachment Two-American people zero. House Democrats are suing the DOJ to get their hands on all the redacted Grand Jury material from the Robert Mueller investigation. The DOJ is asking for a stay of the Democratic demand until the full case can be argued and decided. impeach Trump again.

On 5/18, the Democrats gave the Supreme Court their reasons for wanting to get their grubby hands on the ordinarily secretive Grand Jury testimony.

House Democrats told the Supreme Court (see below) on Monday that they are again in the midst of an “ongoing presidential impeachment investigation” as part of their “weighty constitutional responsibility” – and, the Democrats argued, redacted grand-jury material from Special Counsel Robert Mueller’s now-completed Russia probe must be turned over as a result.

They want to impeach him again? Are they NUTS?

Per their argument embedded below, the Dems are worried that if a stay is granted, they won’t be able to impeach Trump before their terms run out:

If DOJ’s request for a stay is granted, DOJ need not file its certiorari petition until August 2020,1 and therefore this Court likely would not determine whether to grant or deny that petition until at least October 2020. This substantial delay will seriously endanger the Committee’s ability to complete its impeachment investigation during the current Congress –which ends not long thereafter on January 3, 2021

Obviously, they don’t care about this country if they want to put us through another bogus impeachment. The DOJ argues that the Dems already made America suffer through an impeachment.

There is no merit to DOJ’s additional argument that the Committee no longer has a particularized need for the requested grand-jury material because the President was impeached and acquitted on separate Articles of Impeachment several months ago. The Committee’s investigation did not cease with the conclusion of the impeachment trial. The Committee “has continued and will  continue those investigations consistent with its own prior statements respecting their importance and purposes.” The withheld material remains central to the Committee’s ongoing investigation into the President’s conduct. If this material reveals new evidence supporting the conclusion that President Trump committed impeachable offenses that are not covered by the Articles adopted by the House, the Committee will proceed accordingly—including, if necessary, by considering whether to recommend new articles of impeachment.

So what they are saying is so far they have nothing on the President, so they want to go fishing. They also mention that they wish to investigate Barr’s decisions regarding Roger Stone and General Flynn. I can’t wait to see that hearing. Barr will eviscerate Nadler to the point that his staple will fall out, and Nadler will blow up and fly like one of the Macy’s Thanksgiving Day Parade Balloons.

Robert Mueller, who is no supporter of President Trump, found no evidence supporting theories that Trump or his campaign conspired with Russia to sway the 2016 election. In fact, recent reports suggest that John Brennan hid documents indicating that Putin wanted Hillary to win.

This Democratic Party suit is just their latest attempt to slander President Trump and possibly push him out of office in the 2020 election or before.  Sadly, they don’t have a real track record to run on, or care about the American people.

Opposition.to.Application. … by Fox News on Scribd