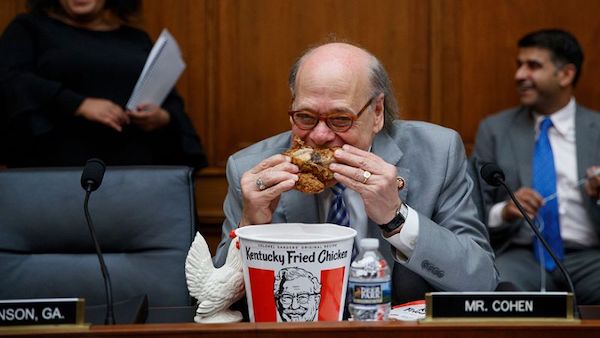 House Democrat and KFC spokesman, Steve Cohen (TN) on Tuesday submitted a resolution calling for the impeachment of Attorney General William Barr.  Cohen has been calling to impeach Bill Barr for over a week, saying, “he is reigning terror on the rule of law.”

“Today, I introduced #HRes1032, which would authorize an impeachment inquiry into Attorney General Barr,” Cohen tweeted.

“He has politicized the DOJ, undermined the rule of law, abused his power, obstructed justice [and] violated the first amendment,” the Democrat added. “He is not fit to be Attorney General.”

Well, Barr doesn’t fit a Democrat’s idea of an excellent AG. That’s because Barr is honest and puts the law first before anything else. They’re used to Eric “I’m Obama’s wingman” Holder” and Loretta “honestly Bubba and I talked about golf and grandchildren” Lynch.

We know the Obama admin weaponized the DOJ & FBI for political gain.

Instead of condemning this bare-faced corruption, Democrats are vilifying AG Barr for bringing it to light and for working to hold those involved accountable.

Perhaps this clown should concentrate on serving the people of Tennessee rather than wielding impeachment as a political weapon every time something happens that he disagrees with.

Cohen’s main points of contention lie in Barr’s reduction of sentencing for Roger Stone, something he calls a “travesty,” and the attorney General’s alleged role in a decision to remove rioters from Lafayette Square during a protest last month.

But Cohen has little to no support for the effort from more prominent Democrats.

House Judiciary Committee Chairman Jerry Nadler (D-NY) called any effort to impeach Barr a “waste of time,” while House Speaker Nancy Pelosi (D-CA) dismissed it by saying, “let’s solve our problems by going to the polls and voting on Election Day.”

But then, she said that before the last election as well.

Are you kidding me?

Bill Barr is cleaning up the mess that Obama, Biden, and Comey created!

Cohen’s actions, just like those taken by Democrats who tried to reverse the election of 2016 by impeaching the President, is all for show. He’s a nut who likes to dance to please his radical base.

This is, after all, the same clown who attempted to insult Attorney General Barr last May when he refused to show up to a sham House Judiciary Committee hearing.

Cohen, you see, wanted to mock Barr as a chicken, and he did so very, very subtly …

Cohen previously butted heads with Pelosi over Trump’s impeachment, pushing her by saying it was the ‘patriotic’ thing to do.

He introduced articles of impeachment in 2017 over the President’s reaction to violence in Charlottesville, Virginia, which has been proven to be a media-generated hoax.

You’d think the people of Tennessee would be embarrassed by this man.

At this point, before we end this post, I (Jeff) have to make a necessary admission. When Cohen was running his first reelection campaign, your’s truly defended him in the Democratic Party primary.

During the 2008 campaign, he faced a battle for his seat against a challenger named Nikki Tinker that suggested that the voters in his district should not vote for him because he was white….and Jewish. 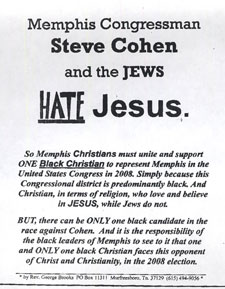 The flier was followed by a TV ad trying to connect Cohen with the KKK. The ad featured Cohen alongside a hooded Klansman, criticizing him for voting against removing a statue of Klan founder Nathaniel Bedford Forrest from a local park.

I now realized that I should have remained silent and the country would be much better off.