Mayorkas Admits At Least 12K Out Of 17K Illegals From Del Rio Bridge Have Been Released Into U.S. 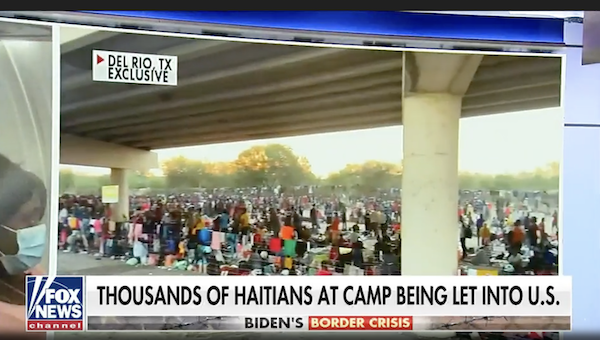 Perhaps because they weren’t American citizens, t his time, they didn’t leave anyone behind. Faced with a protest from Black Lives Matter, the Department of Homeland Security removed the 17K Haitian Illegal Immigrants who were living under a bridge in Del Rio, Texas, and cleaned up the area.  According to DHS Secretary Alejandro Mayorkas, at least 12K of the 17k were released into the U.S.  They had to because doing anything different might make people believe that the Biden administration cares about the border crisis he created.  illegals released into U.S.

“Approximately, I think it’s about ten thousand or so, twelve thousand,” Mayorkas told “Fox News Sunday” when asked how many have already been released. He then acknowledged that this number could very well go up as the 5,000 other cases are processed. “It could be even higher. The number that are returned could be even higher. Whatc we do is we follow the law as Congress has passed it,” Mayorkas said.

A condition of their release is the Illegals have to “pinky swear” that they will show up when their immigration court date comes up.

Two days ago, Mayorkas admitted that the Illegals under the bridge were not being tested for COVID and that he had no idea if anybody got sick with the virus while in El Paso. Then again, it wouldn’t matter.  Per Jen Psaki, the President worries about Americans being vaccinated or wearing masks but doesn’t care about illegals (actually her answer to the question was “next question.”)

The trend in recent months is that 18-20% of the people illegally entering the U.S. had CoronaVirus. That would mean that Bidens DHS Secretary released somewhere around  2,400 infected people across the country. And that’s just this round.

Host Chris Wallace asked the DHC Sec. if team Biden “invites” illegals because the release suggests that the majority of the people who make it across the border will be allowed to stay,

“This is nothing new. We’ve seen this type of irregular migration many, many times throughout the years. I don’t know if Governor Abbott said the same thing in 2019 when there were more than a million people encountered at the southern border,” Mayorkas said.

But Alejandro, based on current projections, this year’s totals will be over two million.

Mayorkas stressed that the Biden administration was operating under the laws and statutes that are in place in the U.S.

Wallace questioned why the Biden administration permitted the Haitian migrants to enter the U.S. at all, asking why a “wall or a fence” hadn’t been put up.

“It is the policy of this administration: we do not agree with the building of the wall,” said Mayorkas. “The law provides that individuals can make a claim for humanitarian relief. That is actually one of our proudest traditions.”

Of course, the “remain in Mexico policy” implemented by Trump and canceled by Biden despite being ordered by the U.S. Supreme court to be continued allows those claims to be made and ruled upon OUTSIDE of the country. There is no examination of their claims by releasing them into the U.S. first. There is just a Biden Administration creating a porous border.