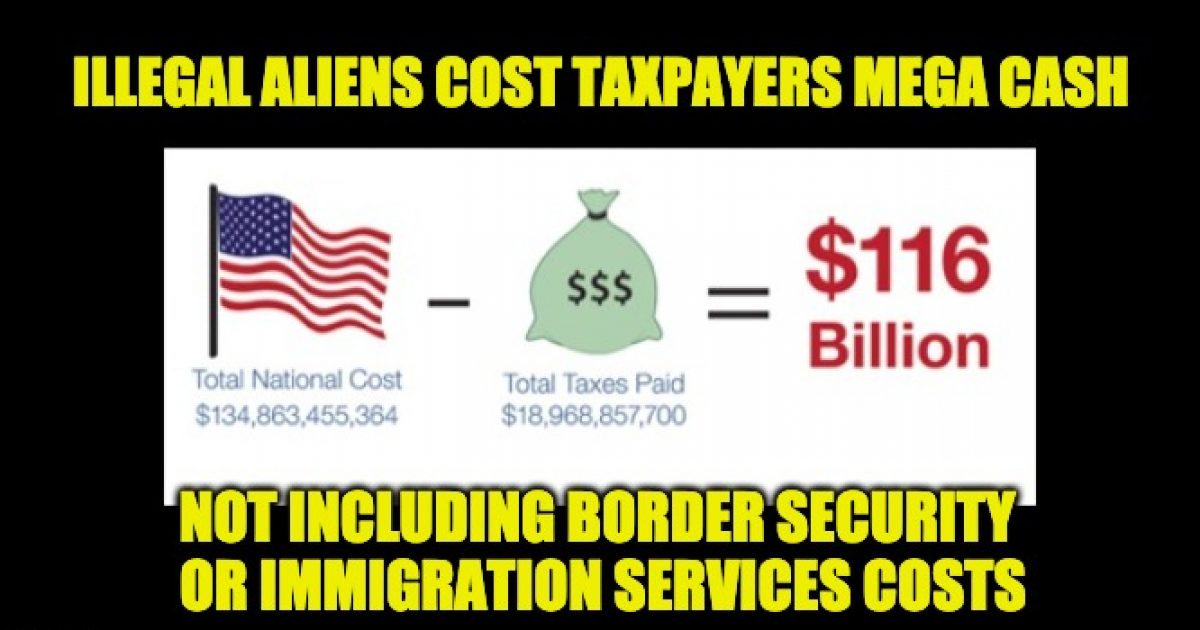 A new report finds that Democrats are wrong about Illegals becoming useful members of society and that most end up requiring government services costing the taxpayers billions. In fact, the majority of illegals receive some sort of government services and in total illegal immigration costs taxpayers over $100 billion more than paid in by those illegals who do pay taxes.

According to the Federation for American Immigration Reform’s 2017 report, illegal immigrants, and their children cost American taxpayers a net $116 billion annually—roughly $7,000 per alien annually. While high, this number is not an outlier: a recent study by the Heritage Foundation found that low-skilled immigrants (including those here illegally) cost Americans trillions throughout their lifetimes, and a study from the National Economics Editorial found that illegal immigration costs America over $140 billion annually

As the U.S. Supreme Court considers whether it is Constitutional to ask a census question about legal status, various U.S. cities are worried about a flood of illegals being added to their social services

The case underscores what experts say is a growing cost to taxpayers from the surge of Central American families and unaccompanied minors.

“We’re talking about billions of dollars in taxpayer benefits over the next few years,” said Dan Stein, director of the right-leaning think tank, Federation for American Immigration Reform. “The payout for the taxpayer is enormous and income to the Treasury is miniscule.”

And that doesn’t even count the cost of border security or immigration services.

While federal benefits are supposed to be off limits, in practice many are not. More than 25,000 undocumented workers receive subsidized housing, according to the U.S. Department of Housing and Urban Development. Children receive free education and most qualify for English lessons and free school breakfast and lunch.

Illegals are not legal recipients of Obamacare, but that hardly matters since all sorts of health services from child care to pregnancies to emergency services are given to illegals totally free of charge… and paid for by taxpayers.

Illegals are also not supposed to get food stamps. But when they have a child in the U.S., suddenly they are allowed all sorts of food assistance.

They also get all sorts of housing assistance, especially if they have had children in the U.S.

Then there are the freebies various liberal states offer to illegals that also come at the cost of the taxpayers:

And this all doesn’t even count the billions and billions that illegals burden the taxpayers with for their criminal activities. When they are arrested for drugs, drunk driving, rape, or murder, they get free legal representation. And then, when they get put in jail, we have to pay for that, too.

Illegals are not a net good for the country. They are a net bad.