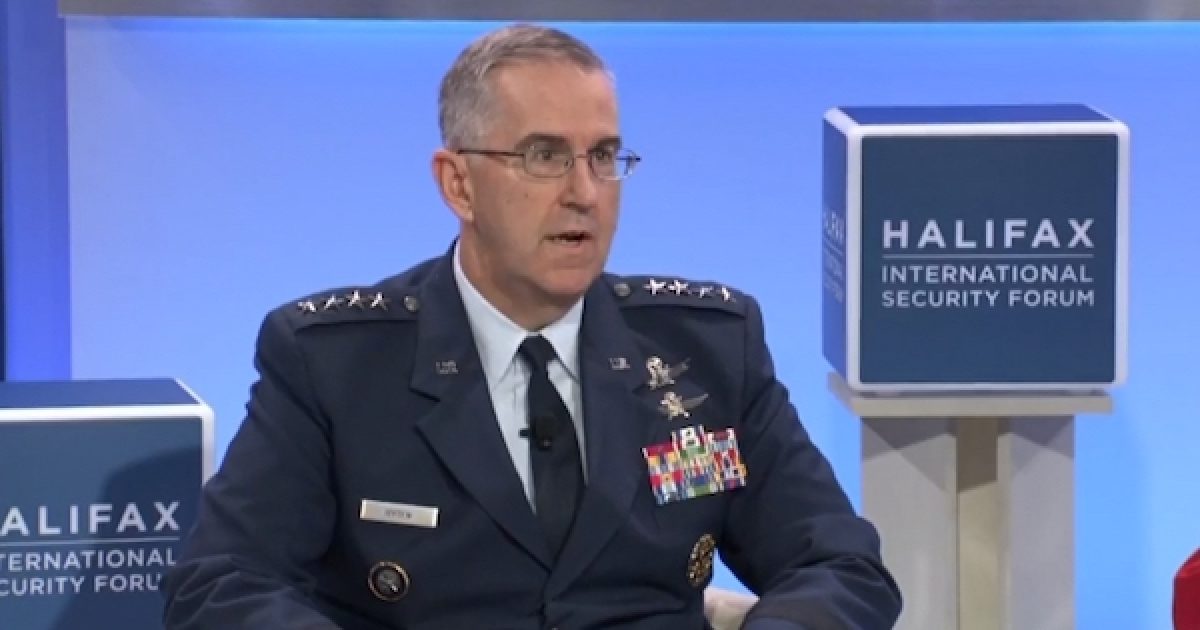 Predictably, the media have depicted this exceedingly minor event as if it were evidence that President Trump’s fitness for command of U.S nuclear forces is being called into question. At a conference in Canada, the commander of U.S. Strategic Command (STRATCOM), Air Force General John Hyten, took a question on the possibility of being given a nuclear order that he thought was illegal.  His questioner asked what he would do in that case.

Hyten’s answer was straight out of the book, and one that he would give about any president.

“We think about these things a lot. When you have this responsibility, how do you not think about it?”

“I provide advice to the president, he will tell me what to do,” Hyten said. “And if it’s illegal, guess what’s going to happen? I’m going to say, ‘Mr. President, that’s illegal.’ And guess what he’s going to do? He’s going to say, ‘What would be legal?’ And we’ll come up options, with a mix of capabilities to respond to whatever the situation is, and that’s the way it works. It’s not that complicated.”

He explained that if he were to execute an unlawful order, “You will go to jail. You could go to jail for the rest of your life.”

All of this is exactly right, and there is nothing in it that amounts to an indictment of Trump or his fitness.  If asked the same question at any time, about a nuclear-forces order from any president, a STRATCOM commander would say basically the same thing.

I’ve worked with these forces on occasion during my military career, and have seen other commanders respond to the same question about illegal (or even just questionable) orders to the nuclear forces.  It comes up a lot.  People are curious, even concerned, and they have every right to be.

A STRATCOM commander knows that.  He’s going to answer the question, not deflect it.  There’s a standard, defensible answer, and General Hyten gave it.  He is not obligated to execute an illegal order.  In fact, the officer is required to not execute an illegal order.  The president knows that.  And the people – Joe and Jane Citizen – need to know that.  It’s reassuring, and it’s true.

Moreover, the general, as a subject matter expert and senior adviser, will do his best to figure out what can be done to meet the president’s requirements, if something that’s not legal – or is against stated policy or the law of armed conflict – is proposed.

That point may or may not be appropriate to make, depending on circumstances; in the professional forum Hyten was participating in, I wouldn’t have been wary of making it.  The audience presumably had the background to appreciate that part of the answer and not misinterpret it.  It doesn’t mean that Hyten would collude in pursuing an unlawful purpose; it means the president, in pursuing a legitimate purpose, may not be conversant with all the details or legal ramifications of force-application methods.  That’s what he has his advisers and senior commanders for.

Hyten did say a couple of sentences I would have left out.  He started off with these observations:

The slightly combative language made it easier for the media to frame this as a crisis exchange about Trump.

So that part I would have dispensed with.  (You will see, if you check out the video at the link below, that Hyten is by no means a firebrand.  He comes off as a steady, commonsensical, well-spoken guy.)

But the rest of this little dust-up is just a lot of yapping about nothing, like dogs setting off a chain-reaction bark-fest.

Notice what the general did not do.  He didn’t take up the question as if it were about the president’s fitness, moral motives, or soundness of mind.  He took the question and framed it as the question he can answer unhesitatingly, on principle: what he would do about an unlawful order, regardless of why it was given.

Aside from the dubious “we’re not stupid” point, General Hyten did his job the right way.  He gave the right answer without making any politically exploitable comment, implied or explicit, about the president.

Of course, that hasn’t stopped the media from exploiting the mere fact that the question was asked and answered.  Nothing can be done about that.

Breitbart has the entire event with General Hyten on video at this post, if you want to assure yourself as to the contents.  The video runs for over an hour and a half.  The panel portion (of “Nukes: The Fire and the Fury”), in which Hyten takes part, starts at the 43:00 mark.