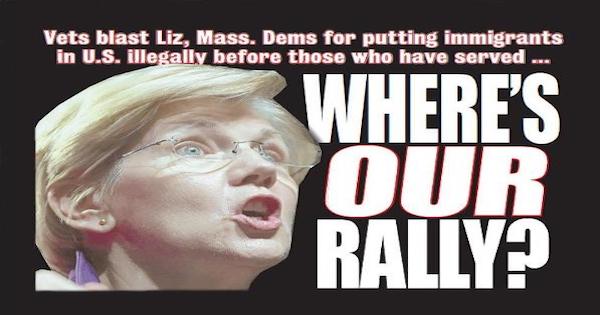 The internet-based vets advocacy group Veterans Assisting Veterans have taken aim at a number of Massachusetts politicians and the senior senator from Arizona, but specifically Sen. Elizabeth Warren for what they see as her “‘selfish political theater’ and demanding they put veterans’ services at the top of their list — or feel the heat.”

According to John MacDonald of Veterans Assisting Veterans (VAV), “We’d like to see our leaders re-examine their priorities, put this at the forefront — if we have to, we’ll knock on some doors in D.C.” MacDonald added, “We need to take care of veterans first before we decide to take care of people who are illegally here.”

As reported by Dan Atkinson of the Boston Herald, VAV has issued a two-page open letter to “all Americans,” but specifically asking Massachusetts politicos U.S. Sen. Edward Markey, U.S. Reps. Michael Capuano and Seth Moulton — himself an Iraq war veteran — and Mayor Martin J. Walsh why are they “failing to speak out about veteran homelessness and health care problems.”

But as noted by Atkinson, the group is “specifically calling out Warren and her ‘misguided antics.’”

“Senator Warren and others like her should know the difference between legal and illegal activity and chose instead to act out negatively in selfish political theater,” the letter reads. “Where’s your rally for US Veterans, Senator Warren?”

VAV member Dennis Moschella, who co-wrote the letter, said the group’s goal is to inspire the public to demand more action on veterans’ issues from the congressional delegation.

“We want every veteran, every family member, to start making calls, put them on the spot,” Moschella said. “We want to know how Warren, Markey, Capuano stand on this issue.”

The only Republican the letter singles out is Arizona U.S. Sen. John McCain, a Vietnam War POW — who “has seemed to forget about his fellow veterans and the deep troubles at the VA.”

The offices of Markey, Capuano and Moulton did not respond to requests for comment. In a statement, Warren spokeswoman Lacey Rose said the well being of veterans is of “utmost importance” to the senator, and that she wanted to ensure they received benefits and services they deserved, but said Warren would do that while also criticizing President Trump’s immigration policies.

MacDonald says he doesn’t buy arguments that state politicians can faithfully support the plight of illegal immigrants and that of beleaguered veterans — and he thinks vets are getting the short end of the stick.

“It’s clear we’re not doing both. Too many politicians that have forgotten about our veterans refuse to even engage in the issue,” he said.

VAV is and has been active in the Bay State, having “funded all-terrain wheelchairs for local (Boston) vets as well as horse therapy at Ironstone Farm in Andover,” which is roughly 20 miles north of the Massachusetts capital city.

MacDonald and Moschella appeared on Fox and Friends Sunday morning, below is the interview.