Sen. Marsha Blackburn Calls On Ilhan Omar to Resign For ‘Threat to Our Democracy’ 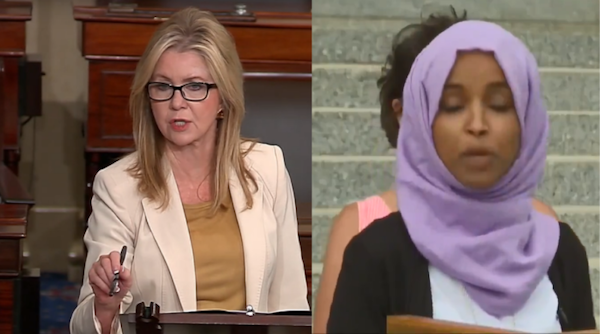 Republican Senator Marsha Blackburn (R-TN) is calling on Rep. Ilhan Omar to resign after the Squad member called for the “dismantling” of the American political and economic system.

Omar (D-MN) made the outrageous statements speaking to members of the Minnesota People of Color and Indigenous Caucus on Tuesday.

She claimed both the political and economic systems were a form of oppression in America and must be taken apart.

“As long as our economy and political systems prioritize profit without considering who is profiting, who is being shut out, we will perpetuate this inequality,” claimed Omar. “We cannot stop at (the) criminal justice system. We must begin the work of dismantling the whole system of oppression wherever we find it.”

Ilhan Omar: We Have to ‘Dismantle the Whole System,’ Not Just Fix Criminal Justice System

A sitting member of Congress actively calling for the toppling of the American system of economics, politics, and law is not a matter so easily dismissed.

We know Omar hates America, but this call is a means to actively cause damage to our nation. And it is a direct violation of her oath of office.

Blackburn called her out almost immediately.

“Ilhan Omar took an oath to defend and protect the Constitution, not shred it,” she tweeted. “Omar and her Marxist comrades are a threat to our Democracy. Omar should resign.”

This is just one in a long line of transgressions that should have prompted her resignation long ago.

Ilhan Omar took an oath to defend and protect the Constitution, not shred it. Omar and her Marxist comrades are a threat to our Democracy. Omar should resign.https://t.co/ujBGxbWXtR

If we had an even vaguely honest media in this country, the first thing they would do is get every prominent Democrat on record answering whether or not they agree with Omar’s statements.

Not the least of which is their party’s nominee for President, Joe Biden, who just this past weekend announced his intentions to “transform” America.

When Joe Biden tweets “, we won't just rebuild this nation — we'll transform it.”Exactly what does he have in mind. His 4th of July speech indicates he thinks radical change is needed reeducating the rest of us into his new found left wing values-none of which he believed before

Does Biden agree with Omar? Is this part of his planned transformation of America?

House Speaker Nancy Pelosi (D-CA) should also be pressed as to whether or not somebody who wants to topple the American system from the inside out should be a sitting member of the House Foreign Affairs Committee, being delivered classified briefings.