Does Ilhan Omar Speak The Words Of A Patriot Who Loves America? (Video) 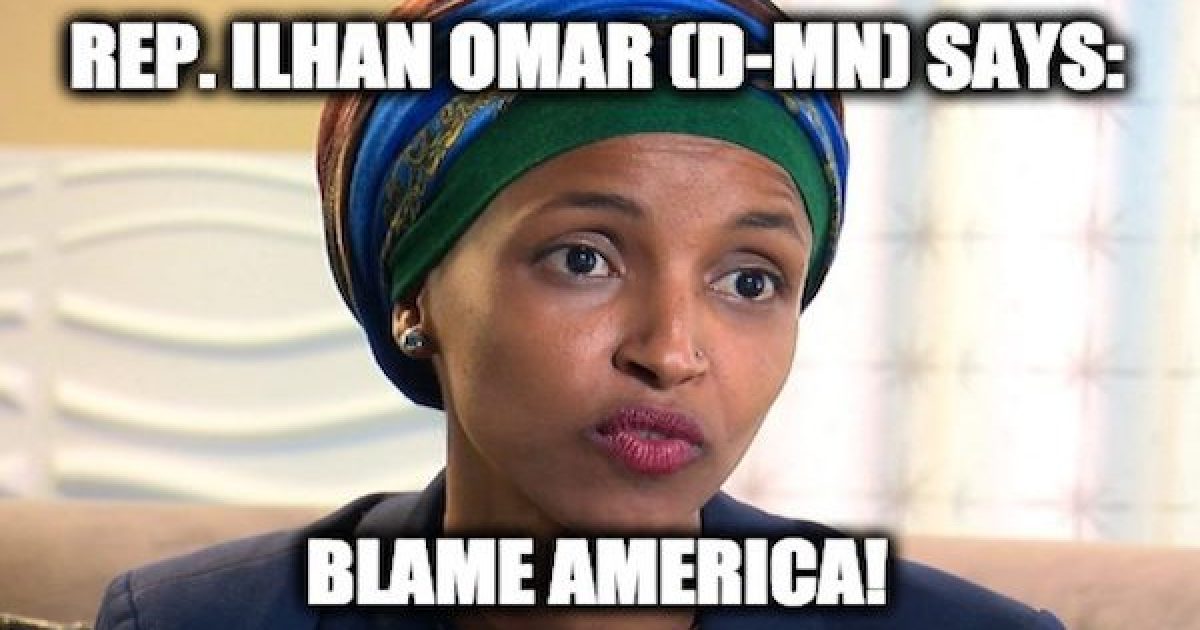 The Democrats are rushing to protect their own, and perhaps that’s the right thing to do.  But what the media is not addressing that the president is correct when he accuses the members of Congress he criticized for hating America and Israel. Well not totally correct, because I would say the hate America and Jews. I will try to write up each member of the gang of four called The Squad, but we will start with the person who is the worst-case Rep, Ilhan Omar, whose words seem to show she is not a fan of   America or Jewish Americans.

In November 2012 Omar tweeted Israel has hypnotized the world, may Allah awaken the people and help them see the evil doings of Israel. #Gaza #Palestine#Israel

In 2013 she blamed the United States for the brutal al-Shabab terror attack on a Kenyan shopping mall saying it was a reaction to what she called “our involvement in other people’s affairs.

In November 2016, Ms. Omar, then a state legislator, wrote one of thirteen letters to Judge Michael Davis, seeking “compassion” and a “restorative approach to justice” in the case of nine Minnesota men who tried to join the Anti-American terrorist group ISIS

In August 2017 said the US was founded by genocide and we only keep power via neocolonialism.

In January 2019 she called Rep. Zeldin racist for introducing a bill to fight the anti-Semitic BDS movement.

Those poor innocent ISIS fighters & Palestinian terrorists right? Give me a break! That’s a problem no matter your religion or gender Ilhan. Your anti-Semitic & anti-Israel hate is strong & wrong & those terrorists have US blood on their hands as well. https://t.co/yVmS6Tdd8T

February 2019 saw Omar Tweeting that the GOP’s Israel Support Is purchased By AIPAC because it’s all about the Benjamins.

She also called for the defunding of DHS which is in charge of protecting Americans on our shores. And even then refused to call Pres, Trump by name–he was “Individual 1”

Later that month she accused Jewish members of Congress of having loyalty to a foreign country. BTW notice Barack Obama was hosting her.

When forced to apologize by leadership, she gave a non-apology saying that groups like AIPAC were still a problem. In March 2019 the entire House Democratic caucus showed their support for Omar’s statements with its refusal to condemn Antisemitism.

On March 25th she issued a call to arms for her fellow Muslim Americans to raise hell in America because Muslims are treated as second class citizens in America.

On May 1st of 2019, she announced her support of Venezualian Despot Nicolas Maduro and blamed the country’s violence on American bullying.

Instead of honoring our soldiers on Memorial Day Omar spent Memorial Day 2019 with the Hamas affiliated organization- CAIR. The organizers threw Gay Vietnamese-American reporter Andy Ngo out of the event.

Today, Ilhan Omar is the featured speaker at a Seattle Ramadan fundraiser w/CAIR, an org the United Arab Emirates accuses of being a terrorist entity. The group is also an unindicted co-conspirator in the Holy Land terror funding case. Apparently there is a protest planned. pic.twitter.com/jl5QnWfBN2

In July 2019 she refused to answer whether if she is a communist or supports al-Qaeda,

And later that day she refused to condemn domestic terrorist ANTIFA or tell them not to use violence.

So does she sound like an American loving patriot? Let me know in the comments.